During tonight's game against Chicago, both teams unveiled their new jerseys for the 2009 Winter Classic game. You can see Detroit's jersey on veteran defenseman Chris Chelios below. 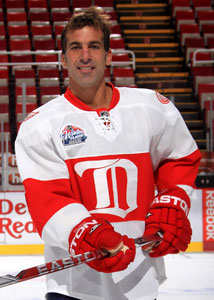 The main focus of the jersey is the vintage Old English "D" that was on the jersey in the early franchise days. It may be hard to tell from this picture, but the Winged Wheel is on both shoulders so you get the vintage jersey with the iconic logo on top.

"With the overwhelming success of last season's outdoor game and the anticipation for this season's, the NHL Winter Classic instantly has become a significant event in our calendar year," said Brian Jennings, Executive Vice President Marketing, NHL. "By wearing commemorative retro jerseys, we not only are celebrating the history of these two Original Six teams, but also recognizing the uniqueness of bringing the game back to its roots."

"We're proud to represent the rich history of the Detroit Red Wings and the City of Detroit," said Red Wings Executive Vice President and General Manager Ken Holland. "The Old English ‘D' served as the hockey team's very first logo and is widely recognized as a symbol for our city and its sports teams."

So if you like the jersey, how do you get your hands on one? You will be able to purchase jerseys via retail (I'm guessing this means Hockeytown Authentics) and the Internet in early December, but the specific date has yet to be released. You can pre-order a jersey by calling 1-800-WINGS-25.