Share All sharing options for: Boston, Detroit, and "Adam's Ribs"

There's an episode of M*A*S*H* called "Adam's Ribs," in which Hawkeye is subjected to the same two choices for meals for 10 straight days. On the tenth day, he snaps violently (but comically, of course), and starts leading the entire mess tent in the chant "WE WANT SOMETHING ELSE! WE WANT SOMETHING ELSE!"

I mention this because two weeks ago, after lousy weather kept me in "beautiful" Nashua, New Hampshire on a Thursday night, I drove (or, more accurately, raced) down to Boston to catch a Bruins game at TD Banknorth Center.

By luck, it was the Habs in town, so the crowd had enough red white and blue in it to keep it honest. But I'm here to tell you something, folks, after spending two hours at the rink (the racing didn't help: I got there 10 minutes into the first). And allow me to be as polite and kind as possible as I say this, and know that I mean no disrespect.

No, I'm wrong. To borrow a line from Bart Simpson, "I didn't think it was physically possible, but it both sucks *and* blows."

I cannot remember the last time I paid for Red Wings tickets (though I've gone using other people's tickets). And after going to the Bruins game, I can't think of a reason I'd pay for them again.

Joe Louis Arena: I could spend a much longer time explaining how the poor Joe has managed to skip the "treasured old barn" stage and gone directly to "horribly outdated smelly municipal facility." But I'll pick just one topic.

My seat for the Bruins/Habs game were on the club level ($110). TDBNG (I'm sorry: the only building worthy of just being called 'The Garden' was demolished in 1997) has three concourse levels. The game did not have a dramatic ending (you knew who was gonna win with five minutes to go), so there was no mass rush out of the building. And yet, as I walked out of my seats, at no point did I break a reasonable walking pace except on the escalator down.

Think right now about the last time you went to a game at Joe Louis. That concourse can barely handle the original capacity of around 19,000. Now put such things as statues and Little Caesar Crazy Bread stands and other crap in the middle of it, and I double dog dare you to leave your seat at the end of a game and *not* be stuck in pedestrian traffic, even before you hit the gerbil tubes.

The fans: Admittedly, it was for a division game against the Habs, but you know what? That building was into it. It was into it for a full 60 minutes (I'll assume they didn't wait for me to show up). A loud, boisterous, pumped full of energy crowd.

And it was a smart crowd, too. They applauded good play that doesn't make the highlight reel. I sat next to a couple of long-time Bruins fans and struck up a conversation, and they were talking about how the team had been doing, and actually had followed the Wings as well. For a team that they would see once, they knew about some of the line shifts that Mike Babcock had been dealing with (more so than even I did with my travel).

With Montreal in town, there was even that sense of edge that makes a game feel extra special. You don't like the other team's fans, but at the end of the night, you'd buy 'em a beer anyway.

Finally, there were the fans in the top two rows of Section 307. They were standing. They were yelling. They were chanting. You were so glad not to be in front of them, but you were also so glad to have that energy in the rink. 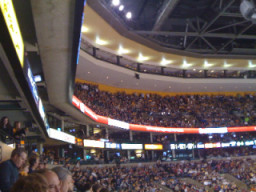 The in-game entertainment: Yes, they have Ice Girls. Yes, they have a mascot of some dopey kind. What they also have is a video board and presentation that looks absolutely incredible. Ribbon displays around the front of the "balcony" level. Two more ribbon displays around the overhead scoreboard. Four high-definition display boards over center ice. Out of town scores constantly displayed (someone want to drop a memo to Mike that no other arena keeps a broken piece of technology in the building?). A great mix of music, most of which came from after 2000.

But, for no other reason, the game presentation rocked because of their second-intermission game. I want to share this with you, and it should immediately be stolen and replace Score-O in every rink on the continent. 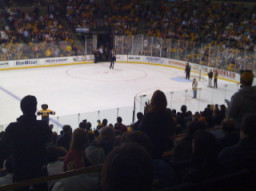 The object is to shoot the pucks into the opposite corner face-off circle. They don't have to land on the dot itself...just stop anywhere in the circle. 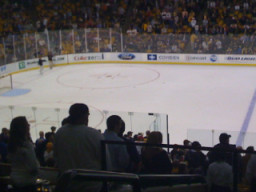 When they announced it, I thought (and you can picture the line from Monty Python And The Holy Grail), "THAT'S EASY!"

After the first one, I realized how difficult of a task this was.

After six shots, not one finished in the opposite faceoff circle.

Really: we've seen Score-O since the first one required shooting frozen dinosaur poop between two rocks. It's time to tuck it into bed nicely, then smother it with another pillow.

The fight: Milan Lucic and Michael Komisarek dropped gloves in the third period. Watch the fight below.


When they went, that building exploded! When Lucic was motioning to the crowd after taking down Komisarek, oh, man...it's why we love the sport. And that building stayed buzzing for a good five minutes of real time afterwards. And they kept showing the highlights of it during media timeouts, and every time, the crowd came back to life.

Compare that to four nights later, when Darren McCarty and Zack Stortini went at it.


Lemme tell you (and this is no disrespect to McCarty, who hasn't had to buy a meal in this town since 1996): it's not the same. Not even close.

In fact, as I was doing research, take a look at this video. In particular, the first 13 seconds:

Note the scoreboard. Note the ads over the entrances. Other than replacing the video wall, nothing in that building has changed in 12 years! The only things that would tell you that this video wasn't from 2008: Gary Thorne's voice, ESPN's graphics, and Steve Yzerman taking the faceoff. 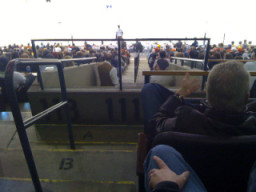 An actual sense of not just Bruins and Celts history, but Red Sox and Pats history as well. 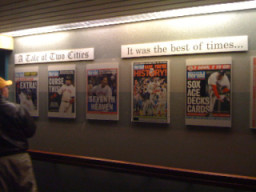 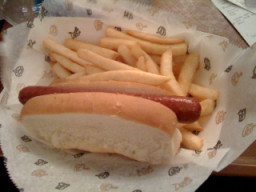 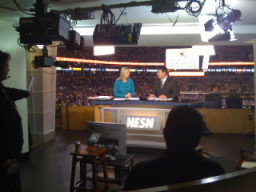 Now, here's the dirty little secret that I've actually known for years, but I'm going to share it with you.

Really. They don't care. They have a history of not caring (if you think this is a flaming post, ask me what I think of what Illitch did to Tiger Stadium, but hide the flammables beforehand). And I'd like to say that not going to the games will encourage them to somehow care, but it won't. Remember: these are the people who have guaranteed that you will not see an over-the-air regular season game unless it's on NBC or CBC for the next nine years. Don't have cable? Too bad! Good luck picking up the signal on 97.1.

The fact that the phrase "Hockeytown" is still painted on that rink just shows how clueless they are.

The fans deserve better. They should have something else.