Outside of seeing the players with the Cup, my favorite photos every season are the ones of the Wings players with the kids at Children's Hospital in Detroit. Your heart can't help but break for these sick kids who are stuck in the hospital during the holidays and it's great to see the organization visit with these kids. The Red Wings organization has visited Children's Hospital yearly during the holiday season for 20 years now.

Alicia Alwood, 12, of Mount Pleasant is a huge Wings fan who counts Chelios and former defenseman Jiri Fischer as her favorite players. Alwood and Fischer were featured on a promotional picture several years ago.

Alwood suffers from hydrocephalus, a condition which is basically water on the brain. Alwood has had 52 surgeries her mother, Cindy Alwood, said.

"I know for Alicia it really brings a smile to her face," Alwood said. "The guys seem so comfortable, they're so at ease with the kids. It's kind of neat for the kids, when they see them on television, they can say they know them." 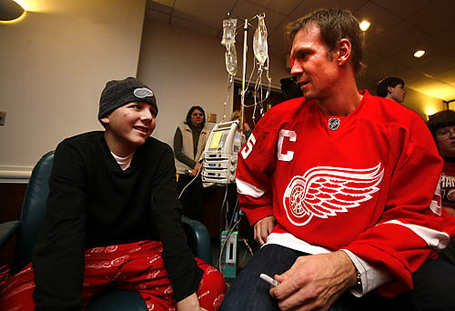 Photo Courtesy of the Detroit News via multimedia.detnews.com

And as head coach Mike Babcock points out below, this is a year-long relationship and not just one visit. Babs has a kid from the Hospital visit him before every home game and then they sit in the lower bowl to watch that game. In 2002, Draper took the Cup to Children's Hospital on his day with the Cup. As these articles point out, it's not just the kids that get a lot out of this annual trip, you sometimes see the players with bigger smiles on their faces than the sick kids.

"For me, it's unbelievable because I have a relationship that doesn't last one day but goes year-round," Wings coach Mike Babcock said. "I have those kids in every night for our games and have done some signings to raise money for them. They battle hard and are an inspiration to all of us."

You can check out the other photos from the event here.