[Game Recap] Wings cling to a 6-5 win over Vancouver

Share All sharing options for: [Game Recap] Wings cling to a 6-5 win over Vancouver

After getting a three-goal lead over the Vancouver Canucks (14-10-2) with less than 14 minutes remaining in the third period, the Detroit Red Wings (17-4-4) nearly lost their lead as the game drew to a close. Fortunately, the Wings managed to hang on and leave the Joe with another two points in the standings.

Less than four minutes later, Valtteri Filppula stripped the puck from Kyle Wellwood and then quickly passed it to Tomas Kopecky, who then fed it to Jiri Hudler. It would be Huds' first goal of the game.

Defenseman Andreas Lilja continues to impress me as he launched a great pass to a streaking Jiri Hudler, who skated past two Vancouver players and beat Curtis Sanford above his left shoulder. His second goal of the game was even more impressive when you consider the two Canucks' defensemen hooking Hudler, who actually drew a penalty on the effort.

Vancouver scored the next two goals including a power-play goal before Dan Cleary tipped in a Nicklas Lidstrom blast from the point to even up the game at three.

The goal of the night came was Derek Meech's wraparound goal that sent Sanford packing. Meech typically plays defense, but was recently pulled up to forward with Darren McCarty out with a groin injury. It marked Meech's first NHL career goal and you can see the happy Wing with his puck in the Detroit News' photo below. 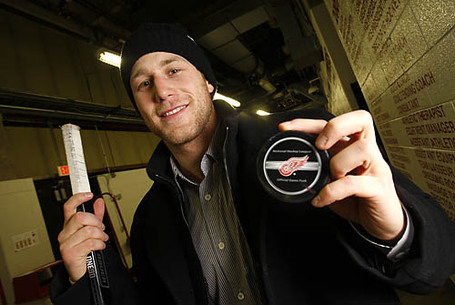 Photo Courtesy of David Guralnick via the Detroit News

Lidstrom scored less than a minute later to snap his 18-game scoring drought. Soon thereafter, Cleary would put in a rebound from a Lidstrom shot to give Detroit a 6-3 lead 6:08 into the third period.

Goals by Henrik Sedin and Alex Burrows kept the game close, but the Wings were able to hang on to a 6-5 lead. Lidstrom notched two assists and a goal in 23:37 minutes of ice time. Other Wings had multi-point games including Hudler (2G), Cleary (2G), Filppula (2A), and Brian Rafalski (2A). What was unique about this game was that between Pavel Datsyuk, Henrik Zetterberg, Marian Hossa, and Johan Franzen, there was only one offensive point (an assist by Hossa) so this game was truly about the secondary scoring stepping up and getting the win.

The Wings return to the Joe on Saturday night when they take on Central Division rival, the Chicago Blackhawks.