My Day at Wrigley Field for the Winter Classic

Share All sharing options for: My Day at Wrigley Field for the Winter Classic

On December 31, I left the suburbs of Detroit to drive down to Chicago for 48 hours of hockey fun. On New Year's Eve, I attended the NHL party at the House of Blues where the different team and NHL officials were as well as members of the media. I even ran into Scotty Newlands, who was the singer of the Canadian national anthem for the Winter Classic (and also the Toronto Maple Leafs singer).

After getting to bed around 3am, I woke up at 7am to get ready and head to Wrigleyville where I was meeting up with my co-blogger, Joe, and his wife at Salt and Pepper Diner for breakfast. After a delicious meal in the cozy yet busy diner which isn't even a block from Wrigley Field, we headed towards Gate D and entered the Wrigley Field concourse. After walking around the concourse for a couple minutes taking in the new decor (instead of Cubs players adorning the banners in the concourse, there were Hawks and Wings players as well as Crosby and last year's WC moments), we came across a crowd watching four Red Wings players kicking the soccer ball around including Andreas Lilja and Kirk Maltby pictured below.

The team does this before every game, but usually by their locker room. With how Wrigley is set up, the team was unable to do so and they decided to take their warm-up exercise to the Wrigley concourse much to the delight of the fans in attendance.

"It was fun. In a regular-season game, playing in an NHL rink, you don't get that opportunity,'' Red Wings center Kris Draper said. "Probably 100-to-200 fans watching us play soccer. People were having a lot of fun. Fans were there talking to us and cheering us.''

Some took pictures. Players signed autographs. But then some Chicago Blackhawks fans entered the scene and spoiled the fun.

"They kind of taunted us a little bit, and that put an end to the soccer game,'' Draper said. "We kind of picked our ball up and went home.

After that, we continued to walk around the concourse until we reached the sections behind home plate. We proceeded to walk all the way down to the bottom of that section and take in the picturesque settings. It was at first a little overwhelming. The lights were just right making the rink appear to glow in Wrigley Field. 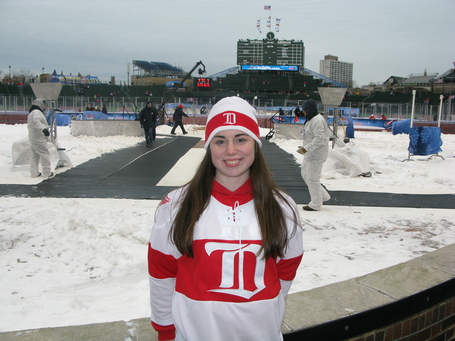 After checking out the view from down low, we went up to the 500 level to take in the view you'd have from the $325 seats (the best of the best). I temporarily lost my breath - the view was simply fantastic. I felt like I couldn't be any more blessed to be there. 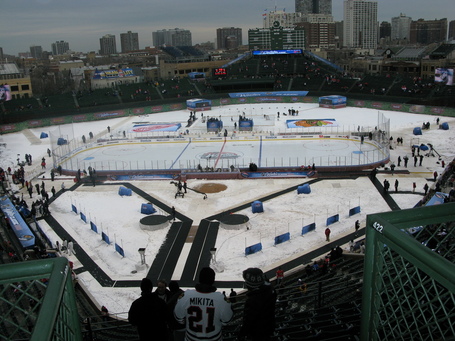 How perfect is that view? I would've loved to have had those seats. Alas, I was not sitting there but my view wasn't too shabby. After taking in the glorious view, I walked down to my seat in section 240, row 18. I gave my legs a breather before visiting Al Yellon, the mastermind behind Bleed Cubbie Blue, in section 126 and then returned to my seats in time to catch the Wings warm-up. Be sure to check out BCB as Al posted some great photos of the game from his close seats to the opening ceremony including player introductions and honoring the Chicago legends. You can also view the opening ceremony in the YouTube clip below (the players start walking with the pyrotechnics going off around the 1:52 mark). 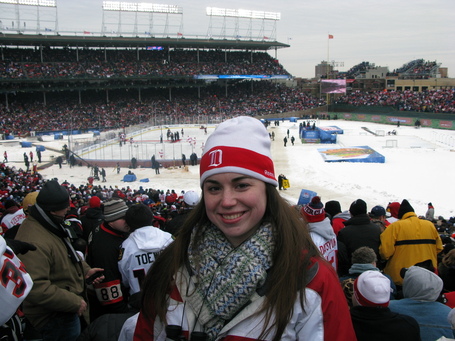 As you can tell in this photo, I had a ton of layers on. My core was warm throughout the game and my face was actually not too cold but my toes were numb by the second period. After being outside for at least an hour after the game, I couldn't feel my toes, feet, and lower legs. It was bad but totally worth it!

A nice touch at Wrigley was the scoreboard where they (1) had the other NHL games that day listed and (2) updated the WC game manually with the yellow score number in the current period. Very cool. Other touches I enjoyed were the fake brick around the rink and the fake ivy painted on the wall was also great. 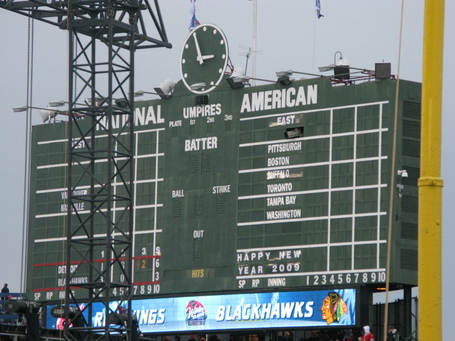 When we got to our seats, we had a giant card taped to our seat. After the opening ceremony, the NHL asked us to all hold up our cards. It read Happy New Year. We then did stunt #2, which said Blackhawks, Red Wings, and Winter Classic. When the Hawks fans realized they were holding up part of the signs for the Wings, they started throwing their cards back onto the field and those of us underneath the upper level had many a card hit us in the head. 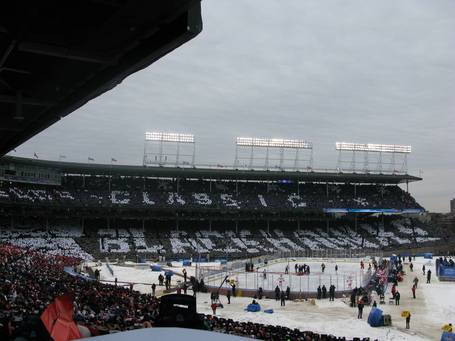 The Chicago Blackhawks (20-8-7) jumped to a quick 3-1 lead by the end of the first period thanks to some dumb penalties taken by the Detroit Red Wings (25-7-5) including too many men on the ice and a delay of game and consequential Chicago power-play goals. The biggest hit of the game came when Hawks defenseman Brent Seabrook sent Dan Cleary flying head first into the laps of the Chicago players on the bench. The big hit was payback for Cleary's hit on Patrick Kane in the game on December 30th. Mikael Samuelsson scored Detroit's only goal in the first frame on a Red Wing power play when he converted on a Henrik Zetterberg pass from behind the net.

Detroit took over in the second period with three goals. Jiri Hudler scored twice assisting the Wings in making a comeback on a national stage. His first goal came when he pounced on a rebound off of Chicago goaltender Cristobal Huet that originally came from a Marian Hossa wristshot. Eleven and a half minutes later, happy Hudler did it again on a rebound. This time, Brian Rafalski took the shot and it took Hudler three whacks at the puck before he was finally able to get it into the net. Hudler would later assist on Rafalski's goal in the third giving Hudler a three-point game in front of a crowd of 40,818 fans. Zetterberg and Rafalski would also earn three points each in the contest.

My favorite goal of the game was Pavel Datsyuk's goal late in the second. While it was not technically the game-winning goal thanks to a late Hawks goal in the third, I believe it was the momentum changing goal and a beauty to boot. Johan Franzen fed Datsyuk the puck, who after passing center ice slipped between the two Chicago defensemen then went right and put the puck through Huet's five-hole on a nice backhander.

Starting at 3:07 into the third, Detroit tallied two goals in just 17 seconds. The first was a power-play goal by Rafalski, who actually scored on a backhanded rebound himself. Unusual since his goals on the power-play typically come on slapshots from the point. The next goal was not so obvious.

Chicago native (okay, technically a Chicago suburb native) Brett Lebda took a hard shot that deflected off of Huet and went into the top of the net and quickly back out. In fact, it all happened so quick that the referee closest to the action said it was a no-goal, but the replay reversed the call. Lebda's goal sent Huet packing and Nikolai Khabibulin made an appearance stopping 13 shots, but it was too little too late. While Lebda was obviously just happy to score and especially on such a big stage (it was only his third goal of the season), he was bummed that he couldn't celebrate right away.

“I wish I would have known it went in right away,” Lebda said. “I would have changed my celebration a little bit, ha ha. But other than that, you can’t be picky, and I’m just glad we got the two points. It was a lot of fun. A good experience, I think, for all of us.

Blackhawks defenseman Duncan Keith would score with ten seconds remaining in the game while on the power-play, but it couldn't change the final outcome.

After the 6-4 win, I slowly made my way outside the Frozen Confines and reveled in the moment at the corner of Addison and Clark St. by the Wrigley Field marquee. It was certainly 48 hours I won't forget and I am most certainly grateful for the opportunity to attend a once in a lifetime event.

I came away thoroughly impressed by the NHL in putting this event together and the Blackhawks organization for being great hosts and honoring Chicago sport legends before the game in such a great manner. It was a fabulous day at Wrigley and I can't wait to see which stadium the NHL will bestow this honor upon next.