Share All sharing options for: Game 3 Analysis and Reaction

Let's start with the big question shall we?

Everyone by now has seen the hit. The rumblings over the legality of it are all over. If you're a 'Hawks fan, you hate to see Havlat get knocked out like that. if you're a Wings fan, you hate to see Kronwall get kicked out like that. Shoulder meets head, feet leave ground after impact--that's as simple as it is. Havlat keeps his head up and we're not even talking about this right now. The guys over at Abel to Yzerman have the best shot of the hit: 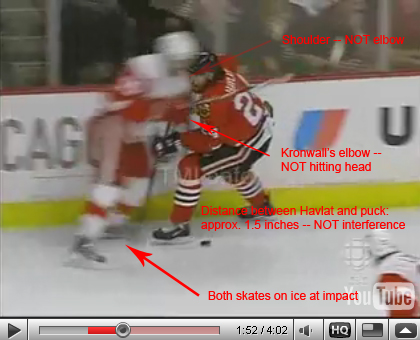 I don't know how to put it much better than the picture does so I'm gonna leave this one at this and move on. Unless there's a suspension, you won't see much else from me on this; and if there is a suspension you're going to see a lot more of it because that's ridiculous.

The next item up for discussion is how bad both teams played. In my opinion, it didn't look like we were watching two teams competing for a spot in the Stanley Cup Finals. None of the goals were really that memorable, or that skillful really, until Sharp's overtime goal. The chances on goal were pretty ordinary and in my opinion, the game was really only exciting after the Kronwall hit and when the Wings made their second period run. The third period was pretty dull and OT was a stinker.Hopefully for all of us, Wings and Hawks fans, Game 4 will be more exciting and active.

Both goalies looked pretty average and one was even pulled. And for those claiming that Huet "saved the Blackhawks' season"...give me a break. The guy faced 6 shots and maybe only 1 was a real threat to go in. Patrick Sharp saved the Blackhawks' season if anything. Ozzie gave up as many goals last night as he had all series, not good. Khabibulin looked like he solidified everyone's thoughts that he was sick as two of the three he gave up were stoppable.

The Wings surely missed Pavel Datsyuk in the game last night. It wasn't just his scoring threat but also what he does defensively and in the faceoff circle. Chicago won 55% and although I can't say for sure if Pavel would have been out there on those shifts, 3 of the 4 goals came off of shots from the point that he is pretty good at pressuring the shooter on. Hopefully he'll be back for Game 4 and at the latest the Game 5 we already know is happening in Detroit.

That's it for now. Rest up and relax because tomorrow's game will be intense.