Five reasons why I love hockey

Share All sharing options for: Five reasons why I love hockey

It's probably a bit surprising to some in my family that I have become such a huge hockey fan. Rooting for the Red Wings and watching hockey is obviously not uncommon here in southeast Michigan, but unlike many other hockey fans I've never played the game or had immediate or even distant relatives who did. In fact, I did not attend my first hockey game until the age of 13 despite watching the Wings on TV since I was six years old. So why do I love hockey? I've listed five in-depth reasons (idea thanks to the Puck Daddy's series) and five of my own photos below.

I never saw the Dead Wings era of the 1980s. In fact, I wasn't even born until the middle of Yzerman's first year in the NHL. I grew up watching The Captain take charge of the Detroit team and lead them to its first Stanley Cup victory in 42 years. We all know that No. 19 was a special player, setting franchise scoring records and later sacrificing his personal stats for the betterment of the team.

IwoCPO at Abel to Yzerman said it best, "Steve Yzerman was a warrior, a player who persevered through pain few of us could endure. He loved to win and nothing else. He sacrificed his legacy for three Cups, and his knees for the city of Detroit."

Steve Yzerman is my favorite player of all time and a key reason for why I love hockey so much today. Why? It's not because he's a great leader. Or at one point a scoring machine, who turned into a complete two-way player. It's because he has a high pain threshold and incredible perseverance. He went out and played. Hockey was his escape. Sure, it made the pain worse. But I bet while he was playing, he felt whole again (I bet you during a stoppage in play, it hurt all over again). Winning was Yzerman's ultimate painkiller.

For me, I am still blown away by his performance during the 2002 playoffs when he was in an incredible amount of pain and struggled to walk up the airplane steps during the playoffs yet continued to play. He didn't just play - he led the team in offensive points to win his third Stanley Cup in five years. It inspired the entire Wings' fan base and created plenty of admirers around the league. As someone who has had 10 knee surgeries and has dealt with chronic knee pain since 2003, his performance hit especially close to home and was an inspiration to me when I spent about a year straight on crutches and at physical therapy back in high school.

Aside from my parents getting me a car for my 16th birthday, my best birthday present ever was sitting 10th row (first row behind the zamboni pit) at Yzerman's retirement ceremony and having the chance to celebrate his wonderful career in person at the Joe. I will never forget that day and the outpouring of love and appreciation that the crowd had for the face of their franchise.

I mentioned above that hockey was an escape for Yzerman and hockey acted as an act of escapism for me, which heightened my love for the sport. Because when I'm watching hockey, I'm free. I picture myself out there. I get all excited when the players start fighting and I celebrate after every goal. I can't escape my life of chronic pain, but I can escape the pain for those couple hours. It's that time that makes me feel like I'm free again. That pain doesn't confine my life. That I can do anything. I get caught up in the beauty of the movement. Of the connection between teammates. Of the joy following a goal. Of the passion these players have for their sport. Of one player fighting for a teammate. Of the magic of a breakaway goal. Of scoring a shorthanded goal to win the game. Of watching these incredible athletes sacrifice their bodies for the sake of the team.

And sometimes, it hurts to be a fan. Sometimes it doesn't help you escape life. During the playoffs, it becomes your life. A loss for your team? It hurts. When you see your team lose in the first round consistently, it stings. And yes, I get bitter towards the team that kicks us out of the postseason. But I'm still feeling something other than the pain in my knee. Hockey distracts me from the one thing that drives me mad.

When you watch your team win the Cup, it's the ultimate painkiller. The pure joy and euphoria that comes along with the victory is something that can only be explained by others who have experienced it. As an intern for the Wings, my knee takes on a brutal workload during the playoffs. Like the athletes themselves, I have a mindset that I can overcome the pain during the playoffs and rise above. Winning a Stanley Cup and driving a Corvette in the parade was the perfect reward for your suffering. 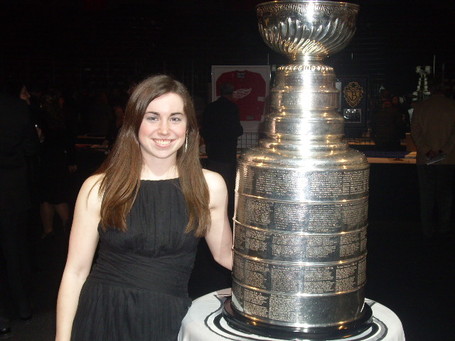 3. The sound of hockey

There is no place I'd rather be than at the hockey rink. The sound of skates slicing through the fresh sheet of ice is just music to my ears. I love listening to the melody of pucks bouncing off the halfboards or the panes of glass during practice.

It's the chatter of the players on the ice, the horn ending the period, the sometimes-cheesy arena music, the sound of the puck hitting your crossbar, the taunting goalie chants, the sharp whistle cutting through the crisp air of the rink, Budd Lynch's voice over the PA system, and the sound of a perfect tape-to-tape pass.

It's the sounds unique to college hockey - a rousing chorus of "Hail to the Victors" from the Michigan pep band filtering throughout Yost Ice Arena, the "see ya" chant from the student section after an opposing player takes a penalty or the "black hole" chant directed towards the opposing netminder, and the pep band playing the Blues Brothers as the crowd dances during the second intermission.

March 26, 1997. It's a date that will remain firmly imprinted in the minds of Red Wings and Avalanche fans for years to come. I was young and impressionable during the height of this rivalry and it was this game that made me realize just how awesome this sport was at the age of 10. At that time in the mid-1990s, the Wings were the only really strong team playing in metro Detroit. When you add that in combination to the excitement and incredible coverage of the rivalry, it's no surprise that hockey drew me in as a young girl.

I'm not one to really watch games over and over again, but I can watch that game multiple times a year without growing tired of it. How could you? 11 total goals. 148 penalty minutes. Two sparring netminders. A Claude Lemieux beatdown aka "The Turtle." Overtime. And of course, a Red Wings' victory.

The Red Wings-Avalanche rivalry embodied the intense spirit of hockey, combining hatred for the other team and a love of the game. Not only did these rivals literally fight on the ice many times over a decade, but they were two of the best teams in the league competing for glory and the chance to advance in the playoffs. In fact, the series winner went on to win the Cup three times in six years (1996, 1997, 2002). 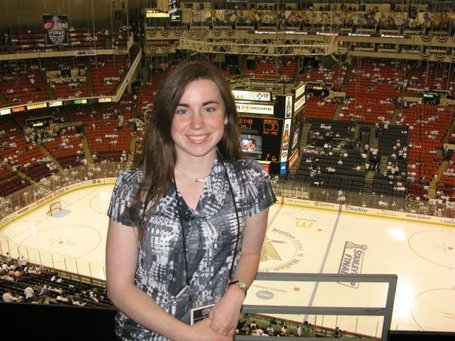 5. The diversity of the game itself

What attracted me as a young kid (and as demonstrated in the previously discussed 1997 game) was the high level of skill and finesse as well as physicality in your average hockey game.

One minute you're watching a star like Alex Ovechkin rush past a defender and somehow get the puck into the back of the net as he falls to the ice. In the same game, you could theoretically catch Donald Brashear duking with an opposing player.

In football, you obviously need skill but the focus is on the collisions and physical nature of the sport. Skill plays a large role in baseball, but physicality has a slightly smaller role. Hockey perfectly melds skill and physical contact and is what makes the sport so exciting for me.

As a Wings' fan, I love observing the artistry that is Pavel Datsyuk when he dangles the puck before abruptly changing his direction much to the surprise of the defender. My face lights up when I see Niklas Kronwall level a player who spent too much time admiring his pass. I enjoy watching the focus and intelligence of captain Nicklas Lidstrom as he thwarts a forward's attempt to bring the puck up the ice in a one-on-one situation. And the crowd and I stand in delight when a rare fight breaks out on the Joe Louis Arena ice.

It's for these five reasons and more that I love the sport of hockey. What would you add to this list? What are your five reasons?