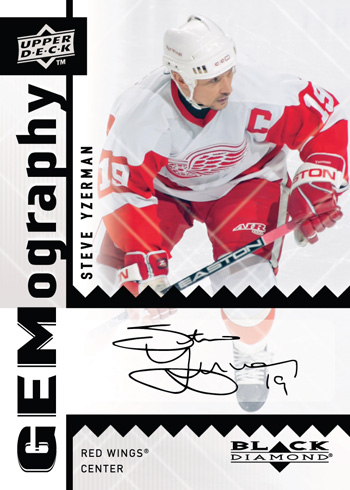 As someone who has a younger brother that is hockey card crazy, I wanted to pass along this tidbit of news. Steve Yzerman recently inked a deal with Upper Deck. For those of you who aren't familiar with the hockey card industry, Yzerman has not "signed licensed NHL trading cards for a number of years so this deal is unique in that there is a very short supply of his autographs in the market."

What's even more exciting is that his card signatures will be paired with the likes of other Wings including Gordie Howe, Nicklas Lidstrom, and Henrik Zetterberg in addition to other NHL legends like Mario Lemieux and Wayne Gretzky. Now those are cards I might actually be interested in!

"Steve Yzerman amassed a multitude of awards and accolades during his playing career both with the Detroit Red Wings and as a member of the Canadian National Team," said Josh Zusman, Upper Deck brand manager for hockey. "To be able to provide collectors access to a player like Yzerman who is so popular in key hockey markets like Detroit and throughout Canada provides a huge boost to our new hockey releases for the upcoming season. We know collectors have been waiting a long time to see content from this legendary player and Upper Deck is thrilled to deliver his autograph."