Two Minutes for... Whatever That Was?

Share All sharing options for: Two Minutes for... Whatever That Was?

A few days ago, Islanders defenseman James Wisniewski reminded everybody outside of the greater New York area that the Islanders exist.  Unfortunately, he did this through use of a rather...ahem... rude gesture.  Wisniewski was suspended two games for reminding Sean Avery that, if he wants to remain his best and most attractive self to the ladies, he should always remember to brush his teeth.  Apparently, the referees thought that young James was doing a great public service, since dental problems are prevalent among hockey players.  Unfortunately, the League Offices thought differently and, while appreciating the naïveté of the refs in the situation, they (perhaps through first-hand experience) know more about what Wisniewski was doing.

In the spirit of the punishment, some folks are wondering if the league's rulebook needs to be updated so things like this can be punished immediately on the ice.  The problem is that, when you create a new penalty, you also have to create a gesture to go along with the call for the benefit of the hard-of-hearing (like, say for instance Lou Lamoriello after you've asked him about the lead pipe in his trunk and the injuries to Bryce Salvador and Bryan Rolston).  Well, we here at Winging It In Motown aim to tackle the tough questions, like "What should the ref's do when calling a penalty for making an obscene gesture?"

We asked on Twitter and got some good answers.  We'll show you what came up and even show you a few illustrations:

First up: Andy from Red Wings blog Fight Night at The Joe (@FightNightatJoe) says "Shake Weight Gesture."
For the Shake Weight Gesture, the ref stands with both hands stacked on top of one another and fingers held as though holding onto a stripper pole for daddy's affection dear life.  The referee then moves his hands in an up-and-down motion while announcing the penalty for unsportsmanlike gesture. 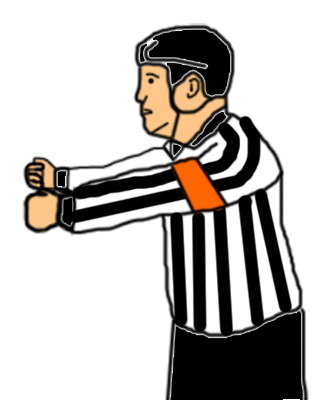 See the rest after the jump [Editor's Note: Special thanks to Casey Richey for the illustrations]:

Next up: Forklift, the Blackhawks blogger from Hockeenight (@hockeenight) comes up with "Flashing a "W" Gang Sign"
To complete this gesture, the referee extends his arm, bending upward at the elbow so his hand is facing perpendicular to the playing surface and his palm is faced towards him.  He then tucks his thumb against his palm while crossing his middle finger over his ring finger and moving his pointer finger and pinky finger away from the center to create the look of a "W".  As a note, referees will also be instructed to do this while slightly stooping and with their pants around their knees if possible.  For safety reasons, this gesture will not be required in Los Angeles. 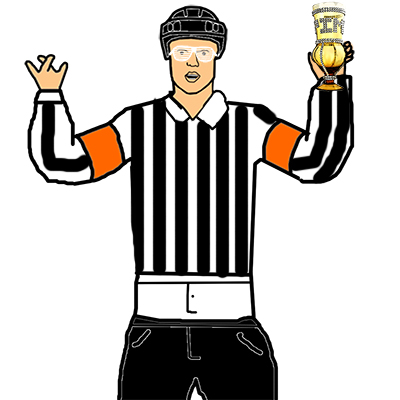 Rob, writer at Detroit4Lyfe.com (@Detroit4lyfeRob) brings us the next one with "Thumb up the Ass"
This one is pretty self-explanatory.  For the sake of homogeny, the right thumb will always be used.

Awesome Red Wings fan Lola, who happens to be by the bay (@Lolabythebay) explains it herself here:
Fist held laterally to one cheek, tongue in the other. If there's no motion I think they can show it during prime time.
[Simple, yet brilliant.  As most guys will tell you, without the motion, there really is nothing there to get excited about.] 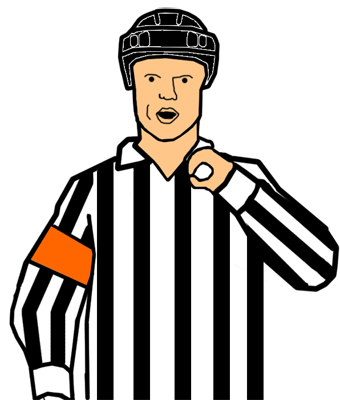 Andy with his second entry: "Hold up a picture of Gary and Cindy side by side. Everyone will get that point "
The only problem with this method is that only one person can carry Gary Bettman in his back pocket and unfortunately, Mario Lemieux isn't a referee.