Enhancing the NHL Fan Experience, One TV Set at a Time

Share All sharing options for: Enhancing the NHL Fan Experience, One TV Set at a Time

One of the main conversation pieces about the draw of hockey as a product has remained that the game loses a lot of its speed when the viewer switches from being live at an event and watching at home on the ol' idiot box.   Anybody who has seen a game live can attest to that.  While even on television, hockey still looks like a whirling blur of non-stop action compared to other televised sports (unless you're watching the Minnesota Wild play), the atmosphere is lost and the picture is too narrow for the scope of the game.

Thankfully, our wonderously futuristic society (yes, even sans-flying cars) has made a huge leap toward bridging the gap between live and televised hockey.  While it's likely nothing will ever truly compare to the thrill of being in the stands when some jerk two rows behind you yells something about your mother because of the name on the back of your jersey, at least technology is working to solve the problem that old hockey broadcasts don't show enough of the ice at any point in time.  That's right, kiddies, it's been said before and I'll say it again, high definition television kicks ass.

With the old 4:3 picture ratio, the only way you could see all the skaters on the ice is if your entire team was doing something stupid or if the guy producing the broadcast thought he was Tony Scott, rapidly switching between the high camera angle and the behind-the-net cam that's almost universally reviled by people who were trying to track the action when some dick with a headset got delusions of Emmys in his fat head.  Squaring the ratio to 16:9 gives a much wider picture and allows fans to track an entire zone at once, so they can tell what their entire squad is up to at any given point (provided both that the cameraman doesn't have the puck-tracking skills of Vesa Toskala and that your team has wingers who come past center ice on the back check, that is).

But, the widened ratio is only part of the equation when talking about how high-def makes watching hockey that much better.  Join me after the jump for more:

While aspect ratio may be one key, but without pixels, it's nothing.  For instance, take this picture: 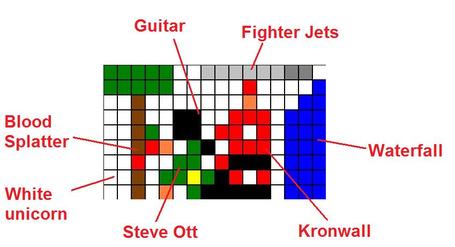 Naturally, you recognize this as Niklas Kronwall beating Steve Ott to death with an electric guitar inside an enchanted forest while a squadron of FA-18s approaches from the north to showcase their aerial dogfighting maneuvers while speakers blast Lee Greenwood's Fourth of July favorite 'God Bless the USA'.  Unfortunately, at 16 pixels by 9 pixels, you can barely see the unicorn in the background.  Of course, it's a lot better than the four-by-three version, but still, more pixels would be way better.

This, of course is the other half of the equation.  Not only is the picture wider, but there's a hell of a lot more resolution to the screen.  Old VGA screens gave your eyeballs a mere 480,000 pixels on which to feast, but at the 1080p resolution, you have more than two million pixels gorging your sightballs, each one firing off a different tiny piece of the picture you're seeing.  With a high-definition set, the puck is more than just a black blob flying around the screen; it has edges, a shape, a purpose.  You can tell when the puck isn't lying flat for a guy when two million pixels are beaming lasers of awesomeness into your visual cortex.

Here's just a small sampling of things that the higher resolution lets you see on a high-definition feed that you likely wouldn't pick up with your old standard def box:

That's just a handful of examples.  The crystal-clear quality of high-definition was practically made for the sport of hockey.  Thankfully, the NHL, NHL Network, Center Ice, and Versus have worked to vastly improve the selection of games in high def.  Of course, that also means you have to see Brian Engblom's mullet and caked-on stage makeup in HD too, but you take the good with the bad, I guess. My ranking of which games I'd watch used to be 1. Red Wings 2. Other Central Division Teams 3. Other Rivals (Ducks, Penguins, Leafs) 4. Reruns of Bones 5. Eastern Conference hockey.  Now, it's pretty much simplified down to 1. Red Wings 2. Whatever's in HD.  Thanks to HD, I can save up brain-choice-power to use on tougher decisions now, like which flavor of Kool-Aid reminds me more of summer and which one is the fall flavor.