Back with the second installment of our goal analysis series. I apologize for the lack of a post following the Vancouver game but I just didn't have the time or the desire after the loss to do so. But nevertheless, we're back with installment two as we look at Henrik Zetterberg's game winning goal in overtime against the Coyotes. 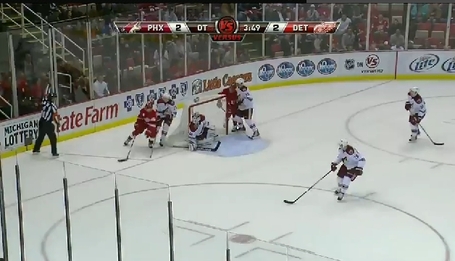 The play starts off excellently for Detroit as Zetterberg draws a holding penalty on Oliver Ekman-Larsson right in front of the ref as he comes around behind the net. You can see the ref bring his arm up as Ekman-Larsson restricts Hank from getting around the net. With the delayed penalty, Howard heads to the bench for the extra attacker. 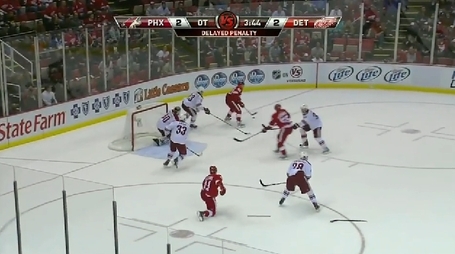 Hank reverses direction and heads the other way behind the net. Cleary broke his stick after trying to balance himself and he heads to the bench to get a replacement. The Coyotes come down low to defend Zetterberg and you can see from the picture that all four are either at or below the face-off dots. 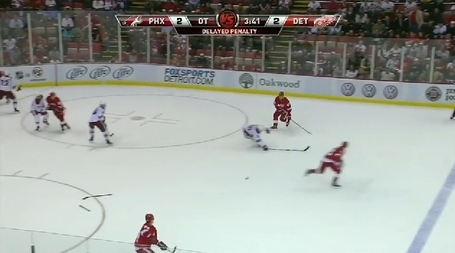 Todd Bertuzzi comes on as the extra attacker and takes a pass from Zetterberg at the blue line. He skates in a bit and draws Vernon Fiddler up to make a play. Fiddler can't stop Bertuzzi's pass over to Ruslan Salei. 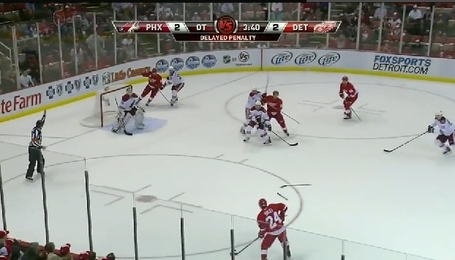 Salei winds up from the top of the face-off dot and spots Zetterberg coming from behind the net. Salei fires a shot that really looked more like a pass than anything to the tape of Zetterberg. Hank deflects it past Bryzgalov for the game winner. 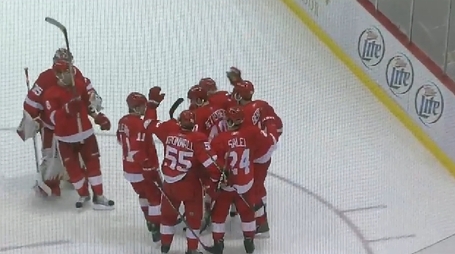 Summary, Henrik forces the rookie to take a penalty and gives the Wings a fifth attacker in overtime. Some good, quick passing while the defense is scrambling and a very heads up shot-pass from Salei to Hank make this play happen.