I had six Detroit goals to choose from last night and thought there was none better to look at than Dan Cleary's second goal of the night. That, and the video for this goal was the best. Cleary's goal wasn't exactly the most beautiful shot you'll ever see but it's a testament to the good things that can happen when you are alert in the offensive zone.

Take the jump for the video and the breakdown. 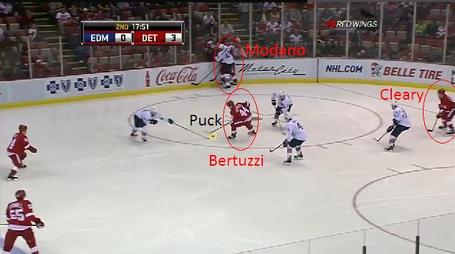 The play (well...the video at least) starts with Modano pushing the puck towards the center of the ice to Todd Bertuzzi as an Oiler defender comes up to pressure him. Bertuzzi has to reach for the puck and as a result loses possession and the Oilers begin to go the other way. 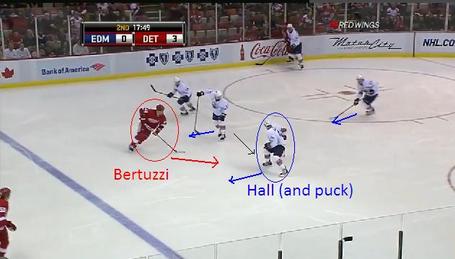 You can see the Oilers are starting to jump up ice but Andrew Cogliano's pass was a bit behind Taylor Hall and he has to reach back for it. Bertuzzi sees this and makes the decision to pressure the rookie Hall as he tries to take the puck out of the zone. 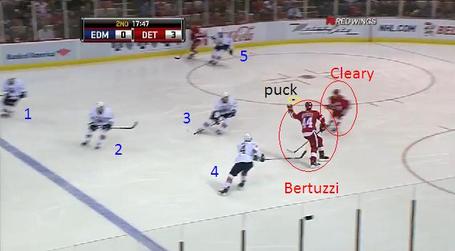 Bertuzzi knocks the puck off of Hall's stick and up into the air. He gloves it down to the ice. Notice how far up the ice all five Edmonton players are at this point and Dan Cleary, Bertuzzi and Modano are further back than four of the five. 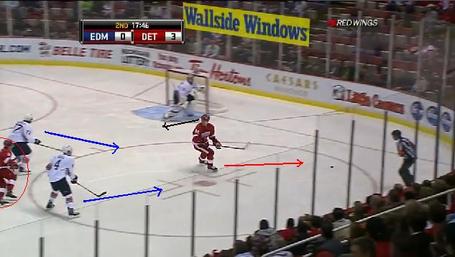 You can see Cleary just in the frame on this one and you can also see Bertuzzi turn his head and look for him as he chases down the loose puck. Tom Gilbert (leftmost Oiler) follows Bertuzzi into the corner and Hall stops at about the faceoff dot.  Cleary heads towards the net to give Bertuzzi support. 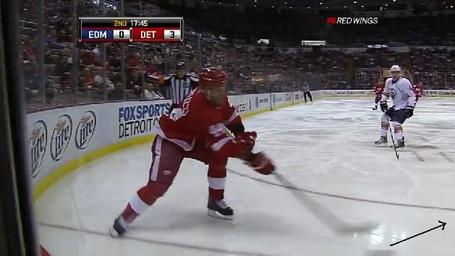 This is where Bertuzzi makes the play happen and earn the full plus in JJ's CSSI. Bertuzzi switches his stick from the left-hand grip to the right-hand grip to make the pass. If he stays with the left-hand grip, he has to either turn his body completely around (allowing more time for the Oilers defender to recover) or he puts a backhand pass towards Cleary which is not very likely to be on target. 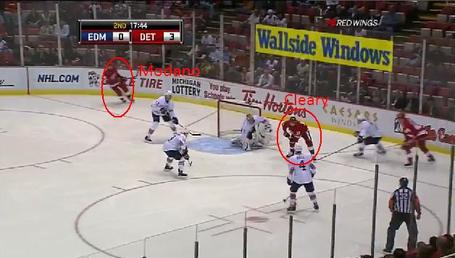 Cleary gets the pass from Bertuzzi to Khabibulin's left. Gilbert is right on his heels and Taylor Hall is just standing there looking like a donkey. With Modano lurking on the other side of the net and a pair of off-screen Red Wings defensemen at the point, the two Oilers on the left have the play pretty well defended. Cleary puts the shot on net and it's 4-0 Detroit. 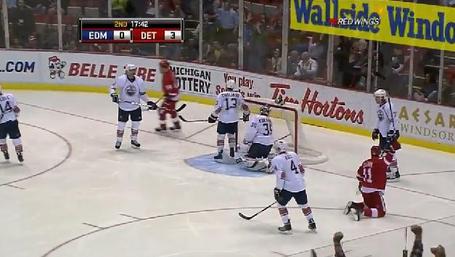 That's the typical sign of a Dan Cleary goal: he's down on the ice after being hit after getting a shot off.

Overall, this is a great job by Bertuzzi to break up the Oilers' rush as it gets started and he prevents them from leaving the zone. The smart decision to switch over to the right-hand grip makes this play possible and although it's a shot that Khabibulin probably should have saved, it's good to see the team rewarded for working hard and playing heads-up in the offensive zone.