About a week ago, I posted a preview of the MLX Men's Skates and today you get the review. MLX Skates are designed by Mario Lemieux and a former speed skater, David Cruikshank, with the idea of making hockey skaters more efficient and powerful in mind while also offering much needed protection from pucks.

MLX offered to send me a pair of the skates in exchange for a review on here and I of course accepted the offer. Like I said in the preview post though, keep in mind that I was allowed to keep these skates no matter how I reviewed them. So, you're going to get an honest review from me instead of a hype-filled post. Below is the link for MLX, go give the site a look as it's well built and informative on the skates.

Take the jump for the full review.

In the preview, I talked about how well they fit just at home. Once I got on the ice, I was pretty amazed with how comfortable they were. Normally, I feel like I have to get my laces tight enough that I'm going to end up popping a toe off in order to feel comfortable with the amount of support my ankle has but that didn't really feel like it was the case with these. The fit was so good that I just basically tied them a tad tighter than I do my casual shoes and I was good to go.

On the ice, I got the usual aching and soreness that comes from breaking in skates (or any athletic shoe, really) but they felt pretty good overall in terms of comfort and fit. I also said in the preview that it's usually impossible for me to get shoes or skates that fit perfectly but these felt pretty good for my feet. Of course, your feet are different than mine (I'd hope--for your sake) but the custom fit mold adjusts for that. The only complaint I had after taking the ice was that aching and soreness, but as I said above that's usual.

The weight of these actually felt pretty fine. I had expressed in the preview that I was a little concerned about it, but after getting on the ice they felt pretty good. They didn't really feel heavy at all and I didn't feel like I was being slowed down by them.

I liked the balance I got and that helped with the acceleration. I got up to my full, non-Darren Helm speed pretty quickly and I felt pretty good in the process.

I talked about this in the preview about how I was very interested in how the adjustable blade (pictured below) would work out. 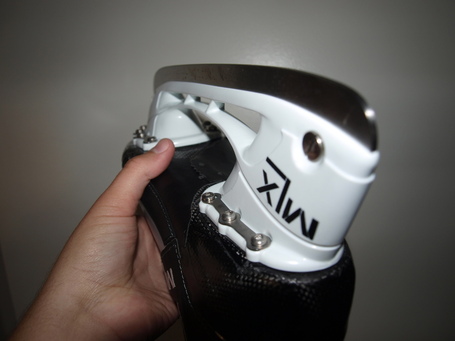 Everyone has a different natural skating motion and so why not adjust your blade angle to go with it? It was a bit of a trick for me to get it right initially but once I did, it felt even better than before. I really, really like this feature because what makes you a better skater than being comfortable and confident in your stride? Nothing does.

The turning and control I had on the ice felt pretty good and I think a lot of that goes towards how comfortable my feet felt in the skates. Felt more like just running around in shoes than in skates (if you know what I mean). There's some issues I had initially with the turning, but once I adjusted the blade it felt better. Good control with the skates.

I didn't exactly stand there and let someone take slapshots at my feet but I did take a few medium speed wristers and a few whacks from a stick to the skates. You're still going to feel it--that's just the way physics work--but it didn't feel painful. By that I mean that you feel the vibrations of the impact but the way they're designed to disperse that energy, you don't feel it in one particular spot that will cause any pain. I would imagine that these have undergone some extensive testing in the impact department from players like Sergei Gonchar, Evgeni Malkin and Dustin Byfuglien. Picture below of the material used for the outer boot. 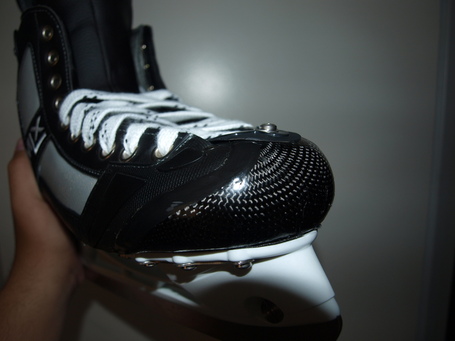 I really, really liked these skates and the comfort along with the performance makes them pretty high quality. Again, I felt like the price was a little high at $799, but you're getting a very high quality skates that's going to offer you (or your kid) a great performance so that old saying of "you get what you pay for" comes to mind. There are so many things I liked about these skates as far as how they felt on the ice and although I'm not guaranteeing they'll help you score 6 goals in your next game, I will say that I thoroughly enjoy them. If you or your kid are serious about playing, give them a try.

Disclaimer: Again, we received a complimentary pair of the skates in exchange for the review.