Goal Analysis: Abdelkader's 2nd goal in as many games

Share All sharing options for: Goal Analysis: Abdelkader's 2nd goal in as many games

This is a new feature I'm going to try to start doing after each game: looking at a big save or a goal and breaking it down to analyze what went right (or wrong if it was a bad goal allowed). This is another awesome perk of being on the SB Nation network, NHL.com loves for us to use their video and since we have the rights to do so I might as well make use of it. Oh, and please excuse my very amateur attempt to illustrate on these.

Video will go before the jump with the breakdown after . 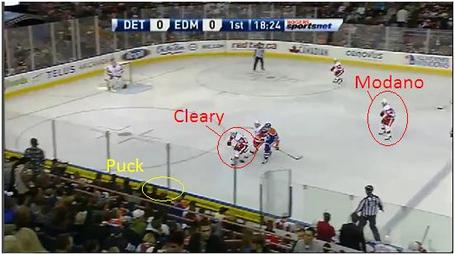 The play starts innocently enough as the puck comes across the ice to the near boards. Dan Cleary wins the footrace to the puck and gets it out of the zone. Note Modano's position. 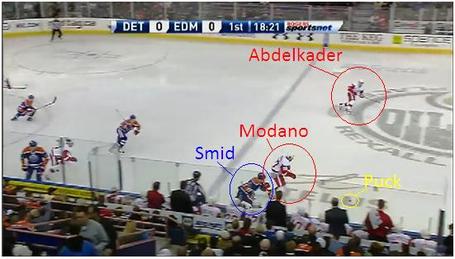 As Ladislav Smid pinches to try and keep the puck in the zone, it bounces past him and into open ice. Modano reads the play as it's developing and takes control of the loose puck and starts the rush out the other way. 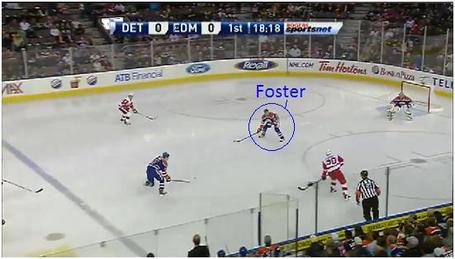 At this point Modano has the option of shooting or passing across to Abdelkader. I think Modano made the right decision for three reasons: 1.) Smid was busting his ass trying to get back on the play and may have been able to get a stick on the pass or Foster might have been able to step up to do the same 2.) Abdelkader's not the best pure shooter in the game by any stretch of the imagination and my guess is that a one-timer would have gone right at the oil drop on Khabibulin's chest and 3.) It obviously worked. I think that Modano realized Abdelkader would have a pretty good chance at a rebound and that a shot from that close in would force a rebound out in front of Khabibulin. Why not put the puck on net and see what happens? 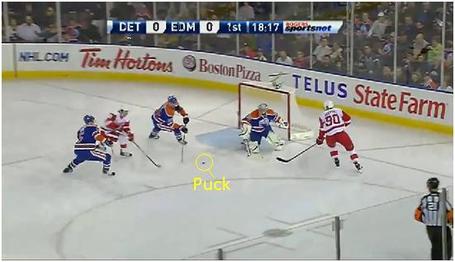 Credit Kurtis Foster for making a smart move to turn his back to position himself well to clear a rebound out and potentially block Abdelkader off. However, Abdelkader is able to worm his way through Foster and the back-checking Smid and with Foster wiffing on a clearing attempt, Abdelkader is able to get the backhanded shot past Khabibulin as he struggles to recover.

Overall, great heads up play by Modano to get the puck in the neutral zone and it's good to see Abdelkader get rewarded for crashing the net on the play.