With Datsyuk out "about four weeks", what's next?

Share All sharing options for: With Datsyuk out "about four weeks", what's next?

The news that all Red Wings were cringing to hear was announced by Mike Babcock as Pavel Datsyuk will be out about four weeks with a broken wrist. Here's what Mike Babcock had to say on it, via redwings.nhl.com:

"He's got a broken hand or wrist, or something like that," Red Wings coach Mike Babcock said. "He'll be out about four weeks."

Datsyuk broke his wrist after being tripped up by former teammate Mikael Samuelsson in the first period. He landed awkwardly and unfortunately broke his wrist. He came out after the fall and played the next shift he was given but he didn't take the face-off. Datsyuk left after the first period but didn't return to the game and after the game the extent of his injury was revealed, much to the chagrin of Wings' fans.

After the jump, we've got video and screengrabs as well as the discussion.

Here's the video via NHL.com:

Here's the first still I grabbed from the video and you can see how Samuelsson trips up Datsyuk: 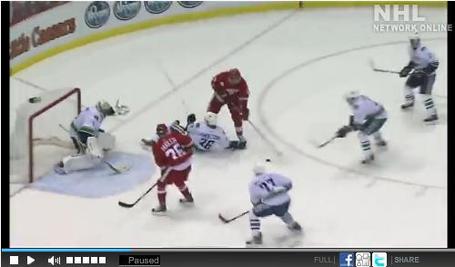 In this one you can see Datsyuk landing on his wrist. 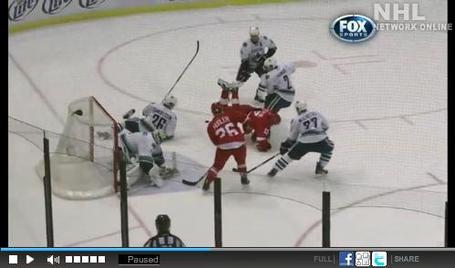 The biggest question now is what to do with the line-up as the Wings are down to 12 forwards and six defensemen.  We now get to the part that will probably get outdated as soon as I post this because news of the plans will probably break after I post this and go to bed.

But anyway, speculating is fun so here are some scenarios that the Wings may look at:

What say you folks? Do the Wings stand ground on the roster or make a move with a Griffin?

Also, if you know the call-up procedures better than I (it's not hard) then feel free to clarify things for everyone.