Share All sharing options for: Goals allowed by time elapsed in period

This post originally started with the idea of how frequent the Red Wings have been allowing goals in the opening and closing minutes of periods. The dreaded "Budd Lynch goal" (Copyright 1832, Ye Olde Production Line) has plagued the Red Wings in recent years and last night's loss to Nashville featured one such goal at the end of the first period. Since there was no easy way to sort stats by goals allowed at time elapsed or anything like that, I went back and painstakingly logged all goals for the season by time of the period and who scored them.Can you guess that I don't want to study for exams quite yet?

Of course, I have nothing to compare them to because although I'm avoiding studying, I'm not going to avoid it to the degree where I log EVERY teams goals for the season. So mainly, this is just a look at the Wings goals have been scored during various times of the game.

Stats, tables and pie charts after the jump. Oh yes.

Method: As explained before the jump, I logged every goal against for the season so far and included the following: period, time elapsed in the period, goal scorer, if it was a special teams goal, and who was in net. For the "who was in net" column I made sure to make a note if it was an empty netter since those are a different type of goal allowed in my book.

Here's a simple break down of goals by period:

Here's a break down of goals by time elapsed, broken into tenths:

*Two of the OT game winners have come with under a minute to play in the extra period.

As you can see, over a third of Detroit's goals allowed have come in the opening two minutes and closing two minutes. Only one empty netter has been scored on Detroit this year, which would bring the actual goals allowed in the final two minutes down to 15, but for our purposes (read: it's easier) we'll keep it in there.

Since I promised a pie chart: 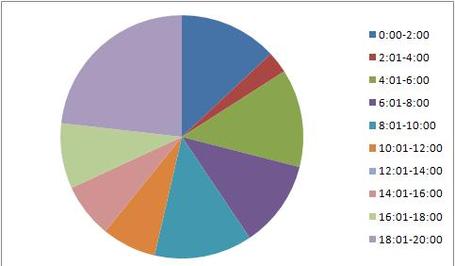 Anyway, let's get on to another statistical break down. Goals allowed in the opening and closing minutes...by goalie.

Of course this stat is very skewed in terms of Osgood's numbers as he has a much smaller sample size than Howard does. The fact that Howard has allowed over 33% of his goals at the beginning or end of a period may suggest that he's a little less focused but I also think there's a ton of other factors in this. I think the defense also plays a little less actively than they should in the waning minutes of periods, something that has cost the team in the past.

What does it all mean? Nothing really substantial I don't think. I think we all have seen the team sort of relax at the end of the period and be attacked pretty much at will by the opposition. Maybe it's one of those things that the opposition is just doing better and they deserve credit? However, I think with a great number of the goals coming in these manners, it is something of some concern. Your thoughts?