Back in October, as part of SB Nation's marketing partnership, the fine fellows at TiqIQ sponsored an NHL "Take a Seat contest which allowed readers to try and win 2 tickets to see a regular season hockey game in December/January this season. Here's the pertinent info: 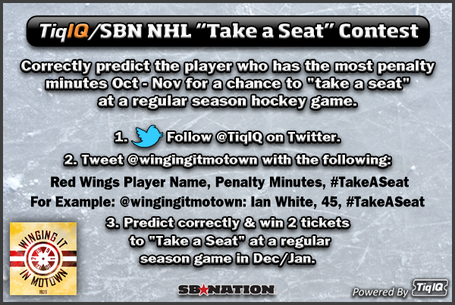 The contest ended at the end of November, the entries were tallied, and three winners from across SB Nation have been declared. Somebody from Stanley Cup of Chowder, somebody else from Fear the Fin, and somebody we actually know and like from right here at Winging It In Motown, our very own ElFuego51, who is proving in his pregames so far this year to have a certain knack for predicting things. 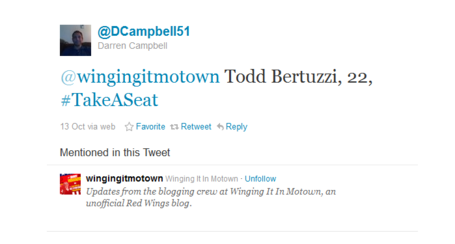 Now you'll see if you look today that Bertuzzi has since been tied by Franzen and overtaken by Jonathan Ericsson for the lead in penalty minutes on the Wings, but those happened after November 30th.

Congrats to Elfuego51 for the victory. Have fun at the game you end up going to courtesy the TiqIQ folks!