The NHL Cannot Take The Easy Way Out With Re-alignment

Share All sharing options for: The NHL Cannot Take The Easy Way Out With Re-alignment

Yet again, the hottest issue in hockey is re-alignment. Thanks to a single tweet from Mr. Bob McKenzie (seen above), everyone and their cousin is writing about re-alignment (including me... again). With roughly two months until the Board of Governor's meeting where the re-alignment decision will be made, it is surprising that this has only just now become such a hot-button issue.

The tweet said that more and more governor's were beginning to believe that, in the words of Greg Wyshynski, 'taking the easy way out' is the correct route for the league. It is far from it. It solves one issue (the Jets being thousands of miles from the rest of their division) but completely misses other more pressing, and longer standing, issues that the league is dealing with.

After the jump, we will see why this is not a solution for the league and how it will cause more problems than it solves.

The issue of re-alignment is not as simple as many people — and the Governors, from the sound of it — seem to think. The biggest issue is easily how far the Jets are from their division. The nearest divisional opponent for Winnipeg is now more than 2500 miles from them. That would be like throwing the Devils into the Pacific division; it makes no sense in terms of travel nor in time zone. This issue must be fixed and, frankly, should have been fixed before the season began, even if it meant redoing the schedule.

However, the Jets are not the only team suffering at the moment. The obvious choice, given the topic of our little blog here, is the Red Wings, who are screwed over by regularly playing teams three timezones and a couple thousand miles over. They are far from alone, though. The Stars, Blue Jackets, Predators, and even Wild and Avalanche could all make a case for being moved into new divisions and they should not, nay, they cannot be ignored. 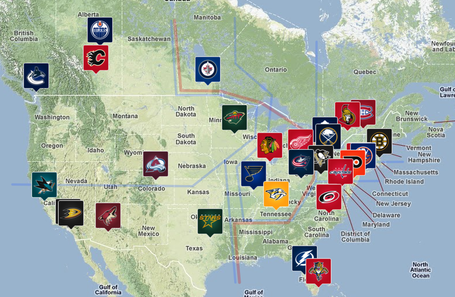 Stars fans often pop their heads into the comment sections of articles that mention how hard the schedule is on the Wings to point out that the Stars are in the same position, if not worse. The Governor's, in their infinite wisdom, threw Dallas in the California division along with Phoenix. The Coyotes are the closest divisional opponent for the Stars and the Yotes, like with the Wings and Blue Jackets, are in a different time zone than the Stars. A standard divisional road trip for the Stars would include trips to three cities that are two time zones from them. Stars fans are right to complain; while we have to deal with a 10 or so games a season that start at 10:30PM to accommodate our west coast brethren, Dallas has starts at 9:30PM roughly three times as often.

The Blue Jackets, being in the Eastern Time Zone, faces the same predicament the Wings do, and are actually further east than we are. The Predators face the same travel issues that we do, though they are at least in the Central Time Zone. While staying in the Central would not kill them, they have let it be known that they are open to moving to the Eastern Conference where travel costs will be lower.

The two teams that almost no one mentions in this discussion are the Wild and Avalanche. They are each others closest divisional opponents, at a staggering 900 miles apart. After that? Every other divisional opponent is roughly 1,000 miles further away from them. The Wild are also, like the Stars, the only member of their division in the Central Time Zone. We may scream loudest, but we are far from being the only ones affected by this plight.

Since the creation of the Blue Jackets and Wild in 2000, the NHL has remained adamant that the current 6 division, 5 teams per division format is the ideal alignment strategy and it would appear they wish to continue this tradition. It makes little sense, though, because it is entirely too restrictive. If the current plan goes through and the Wings swap divisions with the Jets, the Wings will endure as much travel as they do now because they would be so far from their opponents. And what happens if the Coyotes are moved to Hamilton or Quebec or somewhere else out East? We may be pushed back out into the Western Conference. Hardly ideal.

The "easy way out" is not a long term solution. It would decrease travel costs for the Jets, but greatly increase them for the rest of the current Central Division. Not only that, but it completely ruins the "regional division" layout the Governors have clung to. Winnipeg would fly right over Minneapolis on their flights to divisional opponents and the Wings would do the same with Columbus — and even the Penguins and Flyers to get to D.C. — to get to the Southeast. And that fails to bring up the Avalanche who are geographically in the Pacific Division but play their games in the Northwest.

The Board of Governors absolutely cannot take the "easy way out" here. Not only is bad for the players and fans, it's bad for the owners who have to pay for the extravagant travel costs involved with the useless travel requirements. Hopefully the Governors will come to their senses in the next two months and adopt a full re-alignment of the league, rather than this currently proposed, half-assed quick fix.