Share All sharing options for: The Wings' Cap Position

With this morning's great news that newly-appointed alternate captain Niklas Kronwall had signed a 7 year extension carrying just a $4.75 million cap hit, one thing was certain — Ken Holland has expertly placed the Red Wings cap-wise.  The Wings still rank 19th in the league in total salary and will have nearly $5 million in cap space to play with this season, possibly getting a rental or even something more long term.

What is really shocking, however, is where we are long term.  With the cap currently at $64.3 million, and expected to rise yet again next season, we are looking at nearly $25 million to re-sign players and, for just the third time since the lockout, attempt to make a splash in the free agent market.

After the jump, we'll take a look at our free agents for next summer, our needs after these free agents are signed or let go, and who there is for Ken Holland to look at.

Let's begin with the list of free agents.  The Perfect Human, Nicklas Lidstrom, is a free agent yet again.  As he has for a few years now, Lidstrom signed another one year deal this past summer to extend his career and we'll likely have to sit and bite our nails for a few weeks after the season ends to find out if our captain will return for his 21st season.  He'll be 42 years old when he makes the decision and, as the league's eldest player (beating out Teammu Selanne by two months), it would not be a huge surprise if he does decide to call it a career.  As such, how we play this free agency will depend entirely on what his decision is.

Remaining free agents are Tomas Holmstrom, Todd Bertuzzi, Jiri Hudler, Brad Stuart, Fabian Brunnstrom, Mike Commodore, and Ty Conklin.  Darren Helm and Justin Abdelkader are our RFAs.  In Grand Rapids, there aren't any worthwhile prospects with contracts ending, unless you are that high on Chris Conner.

With his diminished role on the team, aging body, and how slow he has been skating, I think it is almost certain that we are seeing the final season of Tomas Holmstrom.  While his net-front presence will be missed, it has become abundantly clear that he is too much of a defensive liability to keep just for powerplays.  Danny Cleary and Johan Franzen have been putting some time in in front of the opposing net minders this season, so hopefully they can make up for what we lose there in some amount.

It also likely that Bertuzzi will retire, though I wouldn't call it a certainty at this point.  He still has some game left in him and has seemed to re-awaken playing with the young legs of Helm and Abdelkader on the third incarnation of Two Kids and an Old Goat.  If he does return, I would expect a cap hit of about $1.5 million.  And at that hit, the only thing holding us back from signing him would be who is ready to take his spot (more on that in a minute).

It is not too far of a reach to say that Commodore will not return next season.  His issue is roster space.  Brendan Smith is NHL-ready and were this any other club, he'd have played every game this season minus the suspension.  Commodore is simply not good enough to hold on to at that point.  I expect the same with Ty Conklin.  With Joey MacDonald on a one-way deal next season and the cap space we have, it is highly unlikely that Conklin will return for a third season with the team.  Given his play thus far and the lack of interest in him since the trade deadline, I wouldn't be surprised if he retires.

Fabian Brunnstrom will have to work hard for another contract because, like Bertuzzi, there is some strong competition and very few open spots.  If Brunnstrom returns, his cap hit will likely float in under $1 million.  Hudler, who pretty much everyone had dismissed before the season, is playing surprisingly well and is much, much, much tougher than in previous seasons, apparently that MMA training helped.  If he continues this play throughout the season, I highly doubt Holland lets him walk.  Hudler's cap hit is hard to determine, though, because he has not played up to his current one yet (though he will if he continues this play).  Because of that, I'll give him his current $2.875.

Brad Stuart is the most interesting name on the list, because we truly do not know what will happen with him.  He has, in the eyes of many, lived up to his contract and the faith that Kenny put in him in 2008 when he traded for him and signed him to a 4 year deal.  The issue is that Smith will be with the team next season and there is no way we let him play as the 7th defender, unless Holland believes that Kronwall and Stuart is a championship caliber first pairing.  My guess is that, unless we trade either Jonathan Ericsson or Jakub Kindl, Stuart will be let go regardless of Lidstrom's decision.

Last, but not least, are our two restricted free agents, Helm and Abdelkader.  I firmly believe that Helm will be resigned before the season ends.  There is untapped potential in him and he is already 2nd line worthy.  An Ericsson-ish deal sounds about right for Helm (if you are Holland), so for calculations, I will give him a 3 year, $9 million deal.  I suspect Holland will tender an offer sheet to Abdelkader and let him test the market.  I don't foresee Abs being more than a career grinder in the league and to lose him would not hurt us that much.

Assuming we re-sign Helm, Hudler, and Abdelkader and Lidstrom retires, that is $15,332,956 left.  With that cap space, we will still have to sign a top tier defender (who may or may not be Stuart), possibly a top forward, and a backup goalie, unless you are comfortable with Joey Mac handling those duties.

The forward corps is pretty full, especially given that Tomas Tatar and Gustav Nyquist should already be playing with the Wings but are being held up due to lack of roster spots.  It is highly unlikely they play another season in Grand Rapids, which could spell the end for someone like Jan Mursak or Drew Miller, who may need to be dealt to make room for players who may already be more talented.

The top free agent forwards — and frequently mentioned as being Detroit-bound — are Zach Parise and Alexander Semin.  Writers for both ESPN and TSN have said in the past that they believe Parise will be a Wing before free agency even begins, so that would assume a trade for him.  And, frankly, if we are to get Parise, that would be best.  Trading away Hudler or Filppula, a prospect, and some picks for him if the Devils know they can't resign him again would be a dream come true. 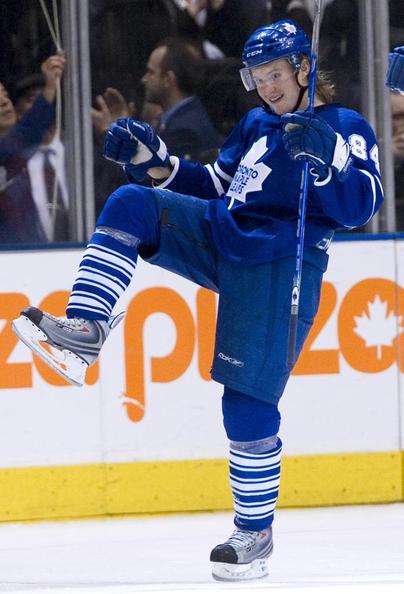 Shea Weber was so last season.
My new dream Wing?  This guy.

There is one interesting name on the free agent list that I think would look perfect on our second line, however: Mikhail Grabovski, currently playing for the Toronto Maple Leafs.  The man is, arguably, the best powerplay man in the league, and that is something we desperately need.  He'll be just 28 and should be available for around $4.5 million a year.

Assuming we go that route and deal away either Mursak, Emmerton, or Miller, that leaves us with $9.5 million in cap space with 14 forwards signed.  On defense, every Wings fan seems to want to rob the Nashville Predators to get us our next top defender.  I won't explain things, so we'll just knock off another $6 million for either Shea Weber or Ryan Suter and you can all be happy.  Though, do be aware that Weber is still an RFA and we would have to give up assets to get him.

My dream backup for Jimmy Howard has been, since the trade deadline last season, Michael Leighton of the Flyers.  He's currently in the minors behind Ilya Bryzgalov and Sergei Bobrovsky, and that is unlikely to change.  He's available and he should be attainable for much less than the $3.7 million in cap space we will have.

Obviously, this team would be a dream lineup.  I think it is unlikely that Holland would let so many of his projects, specifically Brad Stuart, go.  However, I do hope that we can sign Grabovski if Toronto does not lock him up long term as they should.  You can see the full lineup here on CapGeek.

Given our free agent situation that I detailed above, who do you think will stay and go over the next 8 months?  Who are your dream free agents?

All salaries, cap hits, and contract details gathered from CapGeek.