Policing Our Own: Bloggers & MSM in the New Media

As a note, this post is only barely Red Wings' related.  We'll get back to that stuff in a bit.  For now, I want to discuss the Blogger/Mainstream Media relationship and how important a name is in what we do.

If you've been following along on Twitter today, you're already aware that there's a Red Wings blogger who stole eight paragraphs of material from the Red Wings' official beat writer Bill Roose today. The piece by Roose (located here on the official Wings' site) discusses the call-up of Gustav Nyquist from Grand Rapids. Unfortunately, if you thought the post ended with this paragraph then you didn't read Roose's words at his own site. What's worse is that there's a chance you had no idea Roose was the author of these words:

Nyquist was the leading scorer at the University of Maine for three years, compiling 50 goals and 94 assists in 113 collegiate games. He left school early to sign a three-year entry level contract with the Wings last March.

But like I said, it's not just those words, it was eight paragraphs. Eight paragraphs of material that were stolen without so much as a link or a mention of their source. Eight paragraphs treated as though the head writer of the RedWingsGuy website had put them together himself.

Now, it's bloggers who are left to clean up after what's easy to call one of our own. There are plenty of mainstream media types who would throw this as an example of why bloggers should not be allowed anywhere near their hallowed profession (and to Roose's credit, he is not among them; a read through of his Twitter feed from tonight will tell you that). Roose does point out that MSM have their jobs riding on the line for what they do. If a team's official beat writer flat out steals from somebody else, he can and very likely will lose his job. Meanwhile, a large percentage of bloggers live on the blogging edge where they truly are covering their team for the fun of doing it. Losing their reputation can hurt, but for most, it doesn't cost them the ability to make a living doing the thing in which they've been trained.

I'll let my good friend and fellow blogger Michael Petrella from The Production Line take on this point: 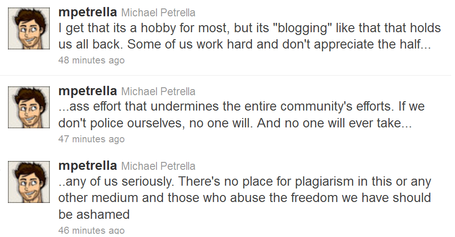 This is exactly how I feel about the situation, summed up perfectly in only three tweets. Petrella has been at this fight longer than I have and has butted heads with this particular blogger in the past. Some feel that there is a certain level of exclusiveness with blogs in the Red Wings' blogosphere (or in those for any team, really). If you're looking for a reason, this is it. Sometimes we don't pay mind to other blogs for this reason (while others, it's simply that we just haven't yet been made aware of great quality content)

The key word Petrella uses here is "community". As bloggers, we have a lot of differing desires for what we want, but the uniting factor is that we all care deeply about the team we cover. I may not have as much to lose as a writer for a national newspaper does, but there's a pride in being part of the blogging community, in sharing ideas and in having a readership who takes you seriously (even when you drop the F-word enough times in a blog post to make your own mother ashamed). I can continue making a living without that, but I'd be less satisfied that way as well.

This is the takeaway from this entire thing. There's a good chance that many of you have never heard about the offending blog before now. There's a good chance that sheer curiosity will drive more of you to that site than would otherwise have visited on any given day. That is something that we'll have to live with. I'm obviously not going to link to it, but I've already said that it's RedWingsGuy and that it's run by Joe Burkel. It would not be difficult to find. I can't keep anybody from checking it out for themselves, nor would I want to if I could help it. Part of being secure in your reputation is trusting that your readership is going to call you out on your bullshit.

After all, if the blogging community has anything to lose, it's your faith in us. Sometimes that means we have to police ourselves. It's unfortunate that no matter what we do, there is always going to be those who will judge the entire community on the actions of those who lack integrity on the low fringe; but we'll keep going, because it's what we love.

(As a follow-up, the offending site has taken down the plagiarized content. Twitter user and Red Wings blogger @inhyung took a screenshot that you can find here for evidence. I'd also like to give a big thanks to WIIM's own Jeff Hancock for pointing out this thievery first thing this morning and for everybody on Twitter who helped spread the word. Thank you all)