According to the official Detroit Red Wings twitter feed: 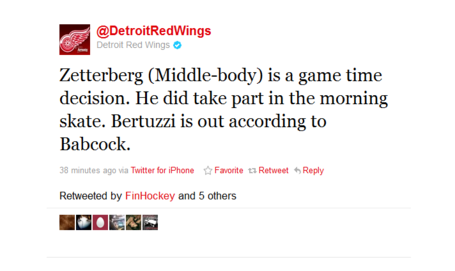 "Middle-Body" Is a completely new phrase in the mysterious lexicon which discusses hockey injuries. Traditionally, a guy has an upper-body injury, a lower-body injury or is dead.  Since the waist has proven to be a pretty good separator for upper and lower body, the system has worked incredibly well.  Unfortunately, when you throw in "middle-body" you completely mess up the mechanics here.  Where do we separate this?  Is this like the strike zone, where the middle body goes from just above the knees all the way up to the nipples, or is this a more oddly-specific central area?

With that in mind, here are my top nine guesses as to what exactly is ailing Mr. Zetterberg

So there you have it.  It could be any one of these issues which might keep him out of tonight's lineup.  We won't know until later in the day.  Until then, what are your guesses?