Is it time to shake things up?

Share All sharing options for: Is it time to shake things up?

There has been a lot of talk about hitting the panic button, Red Wings fans at war, and gardening.

But the questions still remains, should we be concerned?

It's probably too early to panic.  This team is still going to compete and make the playoffs.  The talent is there to get into the postseason tournament.  That doesn't mean I'm not concerned or worried though.

I look back to the 2008 season.  This team was a machine with talent across the board.  Parts could be moved in-and-out of the lineup and it didn't matter.  The system was dominant and the team had the emotion to go along with the skill.  Guys like Kris Draper, Dallas Drake, and Darren McCarty fueled the team emotionally.  Now, it seems like a lot of times the team is coasting and believing they can get by on talent alone.  Well, it's not 2008.  We know and they know it too.  You have to have talent in this league, but that talent needs to work hard as well.  The team seems to lack confidence at times.  They lack the swagger of Red Wings teams of old.  The mentality that we're going to beat you and we're going to out work you.  In 2011, teams don't fear the Red Wings like they used to.

J.J passed along a quote from Mike Babcock from a Detroit News article that I found very interesting.

"I don't meet with the guys after a game. I never do. I shake their hands when we win.  So that gives me an opportunity to never say anything stupid or to be emotional."

If the head coach isn't lighting a fire under his team's ass than who is?  Nick Lidstrom?  That doesn't seem like his way of doing things.  And that's okay at times, but I feel like every now and then some needs to step up and say "guys, wake the fuck up and get your fucking shit together."  Is the dressing room missing a guy fiery guy like that?  Does that fire perhaps need to come from behind the bench or on it?

Maybe it's the talent? Maybe the cap has caught up and we just don't have the talent we think we do?  We've been waiting for years for guys like Valtteri Filppula and Johan Franzen to take that next step.  Did we expect them to be 90-100 point guys?  No.  But by now they should be way more consistent than they actually are.  Maybe those guys are made to get to that next level in this league.  In cap world, those are they guys that have to make a jump.  Should we still be wondering when those guys will get to that level or start asking ourselves if they can get there?

Our top guys aren't getting it done and when they aren't playing well it's concerning.  Our role players might not be what we think they are.  Throw in Danny Cleary, Jiri Hudler, and Todd Bertuzzi with Mule and Flip.  And we have a ton of muckers and grinders Cory Emmerton, Jan Mursak, Patrick Eaves, Drew Miller, Justin Abdelkader, Darren Helm, etc.  Do you see any of those guys really stepping up beyond the 3rd or 4th line roles?  Maybe Helm could have a season or two ala Draper, but ultimately those guys are what they are.

I'm concerned.  Quite possibly overreacting like a lot of the fan base.  My gut just says that right now at this moment, this is not a Stanley Cup team.  Their mental strength is not good and they could us a talent upgrade.  If I'm Ken Holland, I'm not going to make a trade just to make a trade, but I'm sure as hell working the phones to see what's out there right now.  As Kevin Paul Dupont of the Boston Globe points out, the current champs are struggling too and could be a trading partner for the Wings. 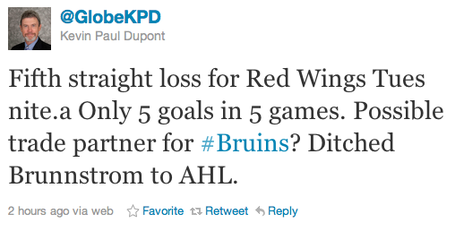 Maybe Peter Chiarelli and Holland shake things up?  A talent for talent deal?  The Wings have almost $5.5M in cap space.  It might be time to use it.  If not now, there better be a move at the deadline.  There could be names like Jarome Iginla or Rick Nash available.  I just might give up a first round pick, a guy like Filppula, and potentially more to get a pure goal scorer.

Bottom line is that this team needs to get its act together and find a way to win.  Another second round exit this season is not acceptable.