Share All sharing options for: Giving Thanks: Wings Beat Flames

Detroit welcomed the Calgary Flames into the Joe for a (real) Thanksgiving eve game which would mark the Red Wings' 20th and set the final piece of the Wings' first quarter of the season. The Flames came off an ugly performance in Columbus on Monday looking to improve on their 4-6 record in November. Flames' coach Brent Sutter had some tough words for his squad before the game about buying into the system. The teams kept the game tight, trading lead changes throughout, until the Wings took off in the third period and buried the Flames.

Detroit got on the board first on a typically Holmstromian tip-in while on the power play. Despite trailing, Calgary came on late in the period and took momentum into the 2nd, where they scored two goals in a span of 2:12 off the sticks of Jarome Iginla and Brendan Morrison. Fortunately, the lead was short-lived as Ian White tied it up about five minutes later.

The third started in favor of Detroit as Holmstrom earned his second power play goal of the game, but Olli Jokinen answered with one of his own to tie it back up. At that point, the refs remembered they had whistles and started calling just about everything they could in trying to reset their standard of officiating. Detroit got a 5-on-3 out of the mess and capitalized as Pavel Datsyuk banked a puck in off Jay Bouwmeester's foot. Just after the expiration of the second penalty, Valtteri Filppula added the insurance marker with a backhand top shelf shot.

Bullets after the jump 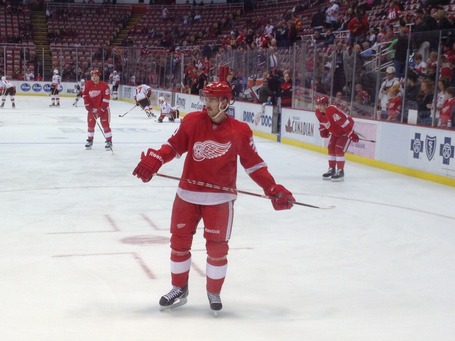 Overall, not a great game for the Red Wings, but it was a win that they needed. I just pray that nobody in the locker room (save for Datsyuk and White) is too incredibly happy with his performance. There were a lot of good individual plays, but the Flames didn't deserve three goals and they weren't all on Jimmy Howard, who is allowed the occasional off night. Player of the game voting is below.