Need a Fiery Locker Room Guy? Why Not Zoidler?

Share All sharing options for: Need a Fiery Locker Room Guy? Why Not Zoidler?

As the Red Wings' losing streak has grown to a depressing six games, the grumbles about what's wrong with the team have grown into a dull roar. While specifics as to whether the team lacks confidence, effort, heart, or..well... other body parts are open to interpretation, there aren't many Wings fans who can't agree with the general statement that there's something mentally wrong with the team right now. We all know they have the talent to compete with the best night in and night out, so the thing that's lacking is their inability to make that talent work in useful ways.

Personally, I feel that the team is putting forth effort, but they're not playing as a team. I think Thursday night's game against the Calgary Flames was an excellent example of that as well. Aside from the missed passes and miscommunications, the 2nd period play by Scott Hannan which ended in Jiri Hudler's face slamming into the boards, requiring him to get 26 stitches and miss an entire period helped sum this up pretty well.

For whatever reason, the Wings are playing like a collection of individuals and not as a team.

We've known for a while that the Wings have always tried to carry themselves with a businesslike demeanor heading into games. Most of us can remember playoff series against those very Flames or the Blackhawks when there wouldn't be a need to respond to a hit like Hannan's physically because it meant that the league's most fearsome power play would step onto the ice in response and bury a goal. Then, as if to remind them not to mess with any member of their collective, they'd spend the rest of the game skating circles around guys.

The Wings rarely needed to fight because they were a well-oiled machine who intimidated opponents through sheer skill-driven domination.

For whatever reason, that has changed with this team. They may not have gotten physical with teams who took liberties, but they definitely sent a message that it was not acceptable. With a sad, disjointed effort and frustration rising, it's perhaps time for the team to lubricate the machine with a little bit of vitriol. It's time for somebody in that locker room to get so sick and tired and angry about what's happened that he can't take any more of this shit. My candidate? Jiri Hudler, and here's why: 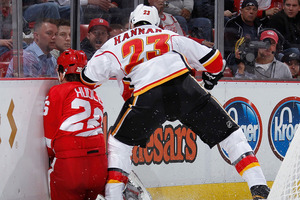 If you look at the roster, it's easy to see the one guy with the most to gain and the least to lose by showing up in that dressing room and reading the riot act to his teammates about whether anybody in attendance gives a shit about the guy in the locker next to his. This is because maybe it's time to deal with the elephant in the room as it regards to Hudler.

The team knows as well as the fans that after Detroit's last cup, Hudler bolted away from his arbitrator-awarded salary to the rich money fields of the KHL. It may be a strong word, but Jiri Hudler betrayed the Detroit Red Wings by chasing his payday. When he came back, he thought that being a top scorer in the inferior league would prove well enough that he could transition back into the NHL without putting forth the work and effort. He had an awful season.

But this offseason, every report coming out is that Hudler has dedicated himself to working harder. Watching the games, I can say with my amateur eye that it looks like this is exactly what he's done. Hudler moves his feet more, works in corners more, and is actually visible in his own zone. Heck, when Rick Nash ran Brad Stuart from behind in a game this season, it was Jiri Hudler who tied up with the hulking Blue Jackets' captain. When it came down to it, Jiri Hudler was the guy standing up for his teammate.

But then he gets slammed face-first into the end boards on a dirty play by Scott Hannan and what does he see when he returns to the bench a full period later? He sees droopy faces and Scott Hannan mysteriously without a shiner.  He sees Hannan take shift after shift without so much as a love tap.

I'm saying that maybe it's time for Hudler to stand up in the locker room, tell everybody that he's sorry for leaving the team like he did, but that he came back and he's working and that he wants to be a Red Wing. Maybe it's time he asks the people in that locker room if none of them thought Scott Hannan deserved a beat down, then why were the Wings still skating like shit?  Why hasn't this team sent a message yet?

And why should it all fall to Hudler to do this? Simple, because he's got the least to lose and the most to gain. Holland has already tried to shop him to no avail. But, if he's as mad about this as I am, then even if the Wings don't respond, somebody in the league is going to see that this crazy little Euro with questionable speed, but a good shot and great hands has the marbles to get mad about his team playing like shit and do something about it. If the locker room tunes out Hudler, then it's their problem. Is Babcock going to super-bench him when things aren't going right?  This is a contract year for him. Worst-case is that he gets benched for telling the world what many fans are already starting to fear and then he starts over in a new city next season. He wasn't the locker room cancer, he was the one trying to get away from it.

Plus, if that does happen, even being a heel can be a good thing for a team. If everybody being pissed off at Hudler is going to make the Wings a better team, then I'm all for that. Somebody in that locker room needs to be able to answer for the 12 shifts Hannan skated after that incident and that somebody sure as hell isn't Jiri Hudler...

[Many thanks to Josh Howard for the banner pic]