Winging It in the Mail Room: Conklin and Ryan and Iginla, Oh My!

Share All sharing options for: Winging It in the Mail Room: Conklin and Ryan and Iginla, Oh My! 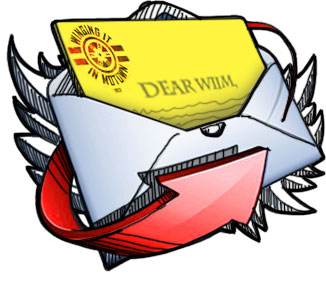 We're back with more of your question in our weekly mail bag. Thanks to those who submitted questions. If you would like to have your questions answered, please email us at WingingItMailBag@gmail.com.

If Holland is shopping for a backup goalie, who might be available?

Thanks for all your time and energy! WIIM is a fantastic blog, Jessica

J.J.: You know? I'm looking around the league and there's not a single goaltender I can see who fits all the criteria of being realistically available, understandably a backup, and paid a sane amount for the Wings. We're probably stuck with Ty Conklin for the foreseeable future. For the record, if Evgeni Nabokov were to come available, I think I'd snatch him up in a heartbeat.

Jeff: I agree with J.J. on Nabokov. He doesn't have the worlds greatest numbers right now (1-5-0, 2.83 GAA, .910 SV%), but he's also playing on the worst team in hockey. Put the Wings defense in front of him and their top 6 goals against per game average and Nabby would play a lot better. Believe it or not though, a potential new back up goalie might already be in the organization. Joey MacDonald was playing very well down in Grand Rapids (2.17 GAA, .930 SV%) before he was sidelined with a concussion on November 5. He starting skating again and could return for the Griffins in mid-December. If he keeps playing well it might be good to see what he can do if Conklin continues to struggle.

Graham: Are we panicking about Conklin a little too much? Yes, he has not played well, but he's played a grand total of 198 minutes in a Wing uniform this year, which is 3 games and 1 period. His job is simply to give the Wings a chance to win when he plays, and I still believe he does that. Remember, 2 of his losses came during "The Streak" when the Wings as a whole were playing like dog shit. Looking around the NHL (and at free agent goaltenders), I don't see a ton of help out there that would be an automatic upgrade for Detroit. I think the only reason why Conklin hasn't gotten a start or two lately is because Jimmy's been so hot Babcock wants to keep him in the zone. If he stinks up the joint in his next couple of starts, then I'll join the bandwagon looking for a new backup goalie.

More of your questions after the jump.

There seems to be a ton of coaching turnovers recently and I assume Anaheim is on the horizon. Assuming there is a change do you think Anaheim is a good team for the Red Wings to trade with and if so whom would you target?

J.J.: I think we can throw the "you know what happens when you assume" shit out the window here. Well-called Zack. I think Anaheim is a medium-quality target for trades simply because it's still an intra-conference rival and it's always just a bit easier sending somebody across the conference line.

Jeff: I don't see a trade happening between the two franchises. I'm sure both GMs would do a deal if it helped out both clubs, but Bobby Ryan now appears to be off the market, and, really, who else on that roster would you really want to trade for? Teemu Selanne? He has a no move clause. Corey Perry? Ryan Getzlaf? Talented, yes, but no thank you. Other than Ryan, I'd really only want Cam Fowler, but even so, we have our young defenseman already in Brendan Smith.

Graham: Now that Anaheim has fired Carlyle and said Ryan's off the block, there's nothing the Ducks would offer to help the Wings that would be worth what they would want in return (a top defenseman or defensive prospect like Smith). The animosity that exists between the 2 fanbases is also big enough that it would have to be a huge trade to offset the negative public opinion that would be present after a deal, particularly on the Anaheim side (since Wings fans are smart and don't give a shit who they trade with as long as the team gets better).

People in Calgary are speculating that Detroit might be a trading partner in an Iginla deal. How would Iginla fit in as a Wing? Who would the Wings give up?

J.J.: I think Iginla would fit in superbly with the Red Wings, but I don't think he'd be worth the price.

Jeff: Jarome Iginla would be a perfect winger for Pavel Datsyuk. Could you imagine the goals those two would hook up on? Iginla, even at his age, has the ability to score 40-50 goals. He's practically a lock to score 30-plus. Give him an all-world set-up man like Pavel and I'd bet some legit money that Iggy would hit 50. With all that said, it would take quite a bit to get him from the Flames. The writing is on the wall that baring a miracle he won't win a Cup in Calgary. Jay Feaster is going to ask for a lot to give up a superstar that doesn't want to leave his team. On top of it all, Iginla would have to waive his no move clause. He's said time and time again that he doesn't want to leave. Would a deal to a team like Detroit change his mind? I would think so (but I'm just a little bit biased haha). Detroit would have to give up either Tomas Tatar or Gustav Nyquist, plus a defenseman and a high pick. Jakub Kindl is extremely expendable and great trade bait after seeing what Smith can do at the NHL level. Call me crazy, but I'd seriously consider trading Kindl, Tatar, and a 1st for Iginla. Capgeek.com says the deal works under the salary cap. Young players and a 1st rounder is a good haul, but the Flames could want even more.

Graham: A motivated Jarome Iginla playing with Pavel Datsyuk looking for a Cup could be a scary proposition for opponents. I would make the trade, but not at the expense of a boatload of picks and/or prospects. I think he'd be worth a roster player, a top prospect and a pick (as Jeff notes). The combination of players the Wings would have to part with in order to bring in Iginla would be the deciding factor for me on whether I like the deal or not.

Another edition of the mail bag is in the books. Thanks to those who sent in questions. Remember, if you've got something to ask, please send it to us at WingingItMailBag@gmail.com.

[once again, bit thanks to Photochop Guru Josh Howard for the mailbag logo.]