[Editor's note: This is something we're considering adding as a feature and wanted to get fan feedback on it to not only gauge interest, but also see if there are design changes you'd like to see. Let us know what you think.
-Editor's subnote: This was originally posted as a Fanshot, but got changed to be a full post so we could put example pictures at the bottom. For those of you who have already given feedback, thank you very much. I only wish we could port the comments over to this thread.]

Some of you may be familiar with win probability graphs. Essentially, the idea is to predict the odds of either team winning at any given point in the game based on the current game state and historical information. These have gained a fair bit of popularity with baseball and recently football but have not seemingly caught on with hockey or basketball.

Tested in the latest version of Chrome, Firefox, and IE.

The interface is not particularly friendly at the moment. Select the season and the NHL ID# of the game you want to see and click the "Get Graph" button.

Keep in mind this is a temporary server and things may be a bit slow.
Once again any feedback is welcome especially suggestions for improvements.

[See Example Charts below. Chart 1 is the Los Angeles drubbing and Chart 2 is last night's loss to Vancouver. The pictures show that you can mouse-over the orange markers to see the event that coincides with that time of the game.] 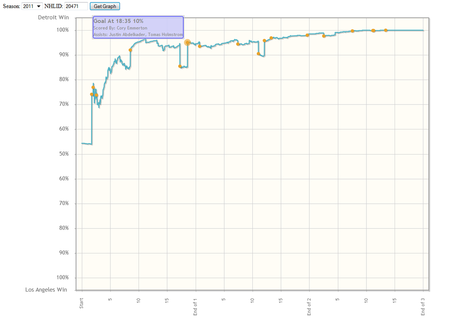 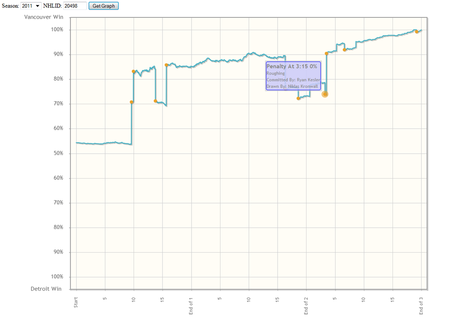