Brendan Smith quickly learning from those around him

Share All sharing options for: Brendan Smith quickly learning from those around him

Yesterday I spoke with up-and-coming defenseman Brendan Smith. Smith is in his first season with the Grand Rapids Griffins after playing for the Wisconsin Badgers for three seasons. Smith was the 27th overall selection by the Red Wings in the 2007 NHL Entry Draft. Smith was also the namesake for new WIIM writer Jeff Hancock's blog, Brendan Smithsonian Institution. Smith was gracious enough to take time out of his schedule to chat with us

WINGING IT IN MOTOWN: You're in your first season in the AHL and you've scored 9 goals and 16 assists in the 46 games that you've played and it looks like you're adjusting pretty well so far. What's the biggest thing that you've had to change in order to adapt to the different style from college?
BRENDAN SMITH: I think just adjusting to the strength and the size of some of the players here. I mean, now I'm playing against men and in college, the oldest guy was pretty much 24. It's just playing against older guys-bigger and stronger guys-that has been the toughest thing for me to adjust to, playing in the corners and stuff but I think I have been doing an alright job just using my skill to get away from the opposition.

Follow the jump for the rest of the talk with Smith.

WIIM: Would you say that's something that more time in the off-season in the weight room will help you improve on?
SMITH: Oh, for sure. We have Aaron Downey here who helps us out with our strength and conditioning. So, I have to thank to thank him a lot for getting me bigger and in the summer working out with Matt Nichol, he definitely put a few pounds on me so that's definitely been a good thing in the off-season.

WIIM: Yeah, I was looking at the differences between the Red Wings and Griffins on defense and you'd actually be one of the bigger defenders up in Detroit, so I guess that's a big asset for you going forward.
SMITH: Yeah, for sure. Hopefully I can play big if I get called up.

WIIM: That's actually a good segue for my next question. Do you have a goal as far as a timetable set for yourself to get to Detroit?
SMITH: I'd say it's more that I will just keep doing my thing and keep trying to play as best I can. Get better defensively because that's maybe where I have to work on the most. Hopefully, it will help me out and Ken Holland will give me a call and say it's my time to shine and get called up. So, until then I'm just going to keep doing the little things and play hard. I'm not really thinking about it until it happens.

WIIM: You're doing an awesome job of helping me segue to my next questions. Speaking of Ken Holland, what was it like meeting him at the draft? Can you talk us through that experience a little bit? We don't really get to hear all too much through the player's perspective of how it goes.
SMITH: Kenny is a great guy. I saw him in the off-season and talked to him a lot. He's arguably the best GM in all 30 teams. To have a guy that knows the game so well is awesome and for him to be so hands on with me is great. He always sends (Jiri) Fischer to come see me and Chris Chelios, too. Everything like that is great because they're always keeping tabs on me so I know that they're watching and that's always a good thing. 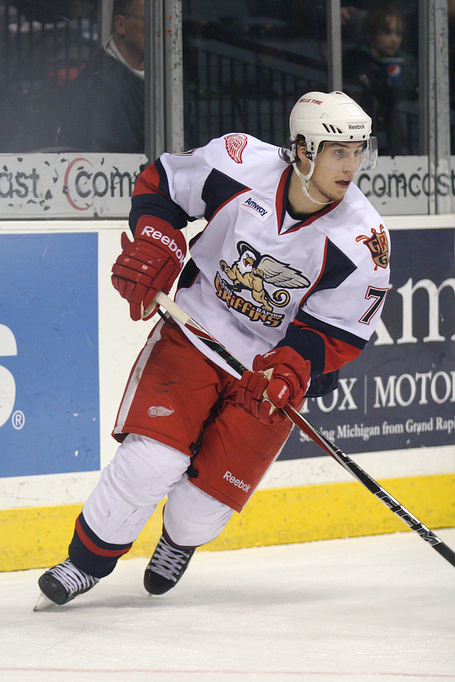 WIIM: Again, you helped me set up the next question. How's it been working with Chelios and Fischer?
SMITH: Oh it's awesome. You could say that Chelios is the greatest North American born defenseman when he played. So, to have him teach me things that I never knew before like how to get out of situations in the corner with bigger guys, how to use your stick and position in front of the net, so having him is great. Jiri Fischer, who I think would be a top two defender on any team right now if he didn't have the cardiac arrest, he knows the game so well and he's so intelligent about how to eat nutrition wise and everything so he gives me a lot of insight.

WIIM: Did Chelios give you any insight into how to play into your 40s?
SMITH: (laughs) A little bit. I mean, his body is his temple and he takes care of it. He's always watching what he eats and stuff so I think that's the biggest thing, taking care of your body and that's you get to play to that age. Not many people can do it right? I guess I got to watch guys like him and Lidstrom.

WIIM: What was it like to get selected to the AHL All-Star game in your first year in the league? (Note: he missed the game with a shoulder injury).
SMITH: It was awesome considering some of the guys that have been selected from Detroit, names like Ericsson and Kronwall, just to have my name with those guys-Derek Meech was there too-it's just an awesome feeling to be selected. It was too bad that I was hurt and couldn't participate, but it was definitely a boost for the confidence and it keeps me going so that's good.

WIIM: After the All-Star break is when you really look at the remaining schedule and right now the Griffins are 6 points back from the Marlies for fourth place in the North Division with a game in hand. With 22 games left, how do you guys make your push for the playoffs at this point?
SMITH: Every game is kind of like a must win. I think we've been playing really well lately. We won two of the last four and went into overtime (the shootout) in the other two. I think we've been playing really well so we just have to make our push now. Every game is like the playoffs now and the other division is so strong and has so many points so we'll have to play a full 60 (minutes) every game.

WIIM: Switching gears now, what song do you put on to get you pumped up for a game?
SMITH: I really like that (Fort Minor) "Remember the Name" song. It gets your blood flowing and it's a good pump up song.

WIIM: What about movie on the bus for a road trip?
SMITH: We watch a lot of the new ones, a lot of the guys get them from Blockbuster. I like the funny ones and one of my favorite ones is "Step Brothers", I think it's hilarious.

WIIM: Well we thank you for taking the time out to talk with us and good luck the rest of the season.
SMITH: Alright, thank you!

I'd like to thank Brendan for taking the time to talk with us, Mr. Randy Rice from the Griffins for helping to set up the interview, Mark Newman for the photos, and the Griffins organization for allowing the interview to take place. From a personal standpoint, it was a pleasure talking with Brendan and his laid back style made the interview seem more like a conversation than anything.

Listening to Brendan talk it seemed like he is using every tool at his disposal to improve himself and become the best player that he can be. It sounds like he has a great motor and is very driven towards succeeding, something that will hopefully make him great in Detroit in the future.