Share All sharing options for: Hank You Very Much: Red Wings 3, Capitals 2

In the marquee match-up of the night in the NHL, the Washington Capitals put their 9-game win streak on the line at Joe Louis Arena against the Red Wings.

Henrik Zetterberg opened the scoring in the first period with his 19th of the season. Zetterberg dumped the puck in behind Capitals' goalie Michal Neuvirth. Dan Cleary pushed it to Todd Bertuzzi on the other side of the net and Bertuzzi threw it to Brian Rafalski on the halfboards. Rafalski whipped it to Zetterberg in the slot and a one-timer beat Neuvirth high glove-side for a 1-0 Detroit lead at 12:23.

The goal was Zetterberg's first since scoring one against the Sharks on February 22. Zetterberg had just emerged from the box at 11:34 of the period and stayed on the ice for the entire shift until the goal was scored.

John Carlson helped the Capitals answer about 30 seconds later with a slap shot from above the face-off dot that beat Jimmy Howard. Jason Chimera passed the puck from behind the net and Pavel Datsyuk stepped forward to try and block the shot, but the puck went past him and then Howard for Carlson's 6th of the season.

The Detroit lead was short lived, follow the jump to see how the rest of the game played out.

Valterri Filppula scored shortly after Carlson's goal to give the Wings the lead back. Justin Abdelkader and Mike Modano dig the puck out behind Neuvirth and Modano gets the puck to Filppula along the boards and Filppula finds Rafalski across the ice at the blue line. Rafalski pump fakes on the shot, allowing Filppula to drive the net and get the tip-in when Rafalski actually does put the shot on net.

Alex Ovechkin scored on wicked wrist shot between the legs of Brad Stuart during the second period. Ovechkin's shot was an incredibly quick release and through the screen, with the placement of the shot, Howard had very little chance on the shot.

Mike Knuble (a one-time Red Wing) tripped Abdelkader midway through the third period, setting the Wings up on a power play. The top power play line was efficient as Pavel Datsyuk fed a pass from center ice to Zetterberg as he entered the zone. Zetterberg streaked down the boards to Neuvirth's left and past Scott Hannan, cutting in towards the goal and lifting an excellent backhander high and past Neuvirth. The goal, at 9:53 of the third, was the eventual game winner and was Zetterberg's 20th of the season.

Brian Rafalski assisted on all three goals tonight. Jimmy Howard stopped 26 of 28 shots en route to win 34 on the season. The Detroit power play went 1 for 2 on the night, while the Washington power play went 0 for 4.

The Red Wings play again tomorrow night in Columbus against the Blue Jackets. The Capitals head to New Jersey to play the Devils on Friday. Tonight's win pushes the Red Wings to 92 points, 8 above Chicago in the Central with the same number of games played. 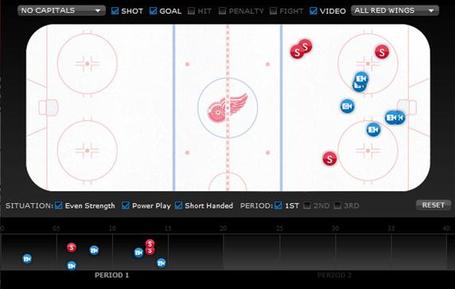 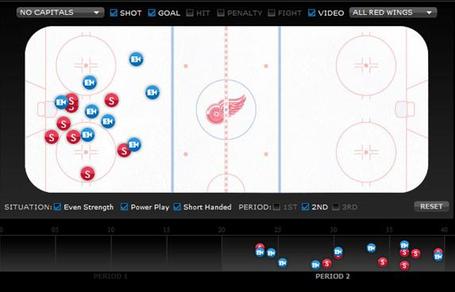 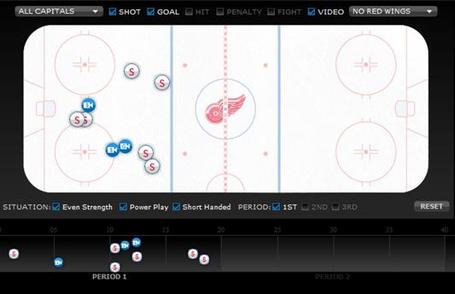 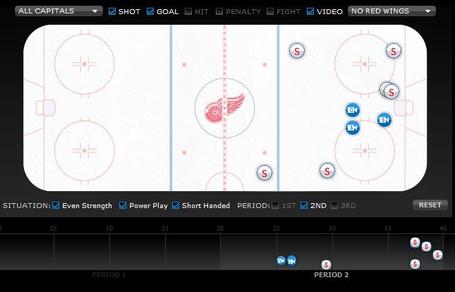