The Red Wings were without Johan Franzen, Jiri Hudler, Pavel Datsyuk and Ruslan Salei tonight, but were able to play competitively against a Nashville team that put a priority on hitting.

With Shea Weber in the box for roughing Patrick Eaves, it looked like the Red Wings had scored a goal off a shot from Niklas Kronwall. However, as Detroit fans have seen far too often, the goal was waived off as Tomas Holmstrom's screen was deemed to be interference with Nashville goalie Pekka Rinne.

The Red Wings got a second power play opportunity about two minutes later as Sergei Kostitsyn was whistled for elbowing Valtteri Filppula. Dan Cleary scored just 8 seconds into the power play as Henrik Zetterberg dragged the puck below the goal line and passed the puck through the crease to Cleary. Cleary tapped it past Rinne for a 1-0 Detroit lead at 19:38 of the first period. The goal was Cleary's 23rd of the season.

Follow the jump for the second and third period, analysis, video and shot charts.

Jimmy Howard had a few great saves in the first half of the second period, but the Predators were able to solve him at 8:42 of the period. Patric Hornqvist took the puck down the boards to Howard's left and after passing Brian Rafalski, centered the puck to Blake Geoffrion. Geoffrion had his stick on the ice and deflected the puck up and off Howard's mask. The goal was Geoffrion's 3rd of the season and tied the game at 1.

Also scoring his 3rd goal of the season was Jonathon Blum, tallying the decisive goal at 8:12 of the third period. Hornqvist put a shot on net and Jonathan Ericsson went to block it. Ericsson got his leg on it to stop it, but it kicked out to Blum. Blum had a wide open net to shoot at and he didn't miss--although he almost fanned on it.

The Red Wings got a power play late in the game, but were unable to tie it up thanks to some big saves from Rinne. With the game on the line and Howard on the bench for an extra attacker, Dan Cleary lost a face-off in the Nashville zone and Ryan Suter gets the puck to David Legwand. Legwand got the empty net goal and clinched the two points for a Nashville win.

The Red Wings next play on Monday against the Pittsburgh Penguins.

Sadly, I only had one to choose from.

I'm tired and a bit pissed off so here's the full shot charts for each team, not separated by period. The second period for Detroit is on the right. Nashville's second period is on the left. 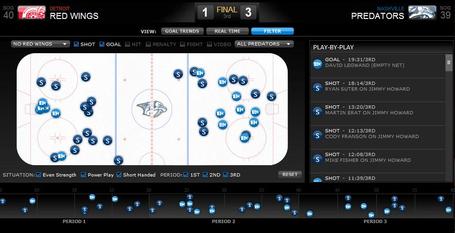