What shouldn't have been, but almost was--Red Wings 4, Penguins 5 SO

Share All sharing options for: What shouldn't have been, but almost was--Red Wings 4, Penguins 5 SO

The talk of the NHL today was Matt Cooke's suspension for the rest of the regular season and the first round of the playoffs. However, Cooke's team still had to play tonight without him and it turned out to be one incredible game.

Pascal Dupuis scored on Jimmy Howard at 15:14 of the first period to open the scoring for the two teams. Dupuis picked up a loose puck from behind the net and skated it out in front of Jimmy Howard. Howard was hugging the post very tightly, but Dupuis' backhand shot somehow found its way through the tiniest of openings and into the net for a 1-0 Pittsburgh lead.

Later in the period, Ben Lovejoy takes a shot from the point and Howard kicks it out front. Alexei Kovalev picks up the rebound and pass it off to Jordan Staal on the side of the net. Darren Helm covered part of the goal and forced Staal to hit the side of the net.

But where Jordan Staal missed, Chris Kunitz followed through. The Wings tried to clear the puck up the boards, but Kris Letang stepped up and kept the puck in. Pascal Dupuis picks up the loose puck and shoots the puck on net. Howard is out at the top of the crease and gives up a rebound straight out in front. Kunitz picked the puck up and hit the rebound past a scrambling Howard as Brian Rafalski and Henrik Zetterberg tried to take him out of the play.

Howard had given up 2 goals on 8 shots in the first period.

Follow the jump for the rest of the wild finish, video, analysis and shot charts.

Arron Asham and Jakub Kindl locked up going to the net off a Pittsburgh offensive zone face-off win. Craig Adams put the shot on net at 4:22 of the second period, but the referee deemed Asham interfered with Howard's ability to make a save. I think the call was pretty bad in all honesty as Asham was pushed into Howard by Kindl, but the ref saw it as interference so the goal wasn't allowed.

Matt Niskanen was sent to the penalty box for boarding Justin Abdelkader. With the Red Wings on the power play, Jordan Staal got a pass from Ben Lovejoy and put it through his legs to Pascal Dupuis. Dupuis took the puck down the ice with another Penguin to create a 2-on-1. Dupuis fanned on his centering pass, but was able to pick the puck up off the boards behind Howard's net and bank a shot off his skate and in for a shorthanded goal and a 3-0 Pittsburgh lead.

Tyler Kennedy scored about 3 minutes later off of a soft rebound by Howard. Adams had the puck on the boards to Howard's left and with Todd Bertuzzi on his back pressuring him, he dumped it off to Kunitz. Kunitz fed a soft backhanded shot on net that Howard should have easily held on to, but instead a rebound kicked right onto the stick of Kennedy. Kennedy skated across the crease and backhanded the puck over the outstretched goalie for a 4-0 Pittsburgh lead.

Henrik Zetterberg started the comeback for the Red Wings late in the second period as he dumped a puck into the offensive zone for Dan Cleary to chase. Cleary beat Kris Letang to the puck and fed it along the boards to Zetterberg. Zetterberg outworked Mike Rupp in the corner to bring the puck out to the face-off circle. Zetterberg backhanded a shot on net that Brent Johnson should have easily saved, but it went in the back of the net for Zetterberg's 21 of the year.

Valtteri FIlppula cut Pittsburgh's lead in half early in the second period. Brad Stuart dumped the puck back low and Tomas Holmstrom went to get it. Holmstrom got the puck back up the boards a bit and Stuart came in to play the puck. As Stuart came in, James Neal and Dustin Jeffrey closed on him while Filppula spun off of Neal and towards the net. Filppula outmuscled Deryk Engelland to the net and got enough of his stick on the puck to get it through Johnson's five-hole. Johnson lightly kicked the puck into the back of the net at 1:57 of the third period. Holmstrom got his 500th career point on Filppula's goal.

The Red Wings weren't done yet though and Kris Letang crosschecking Darren Helm put the Red Wings on the power play with 13:00 left in the game. With under a minute to go in the power play, Henrik Zetterberg won an offensive zone face-off back to Nicklas Lidstrom. Lidstrom whipped the puck across the blueline to Niklas Kronwall. Kronwall fired on net and Cleary deflected it past Johnson to bring the Red Wings within one.

About a minute after Cleary's goal, Kovalev took a holding penalty and was sent to the box. About a minute and twenty seconds into the power play, Mike Modano scored to cap the rally. The goal (available below) happened Lidstrom found Filppula at the blueline and Filppula skated the puck into the zone. With Holmstrom going to the net and Rafalski coming across the ice towards Filppula for support, the wide side of the ice was open and Modano had a wide open shot once the pass came across from Filppula. The goal was Modano's 3rd as a Red Wing and tied the game at 4 with about half the third period to go.

Kronwall interfered with Chris Connor late in the third period to give the Penguins a power play and a chance to win the game in regulation. Instead, the Red Wings had the best chance to win it when Helm and Abdelkader had a 2-on-1 shorthanded chance. Helm dished the puck to Abdelkader and Abdelkader got it back to Helm for a quick shot on net, but Johnson made a spectacular save to preserve the tie.

Little happened in overtime, but the shootout breakdown is below.

Detroit plays next on Wednesday against the Vancouver Canucks. The point salvaged tonight puts the Red Wings at 95 points on the season. Joey MacDonald was hit with the loss.
:: ANALYSIS :: 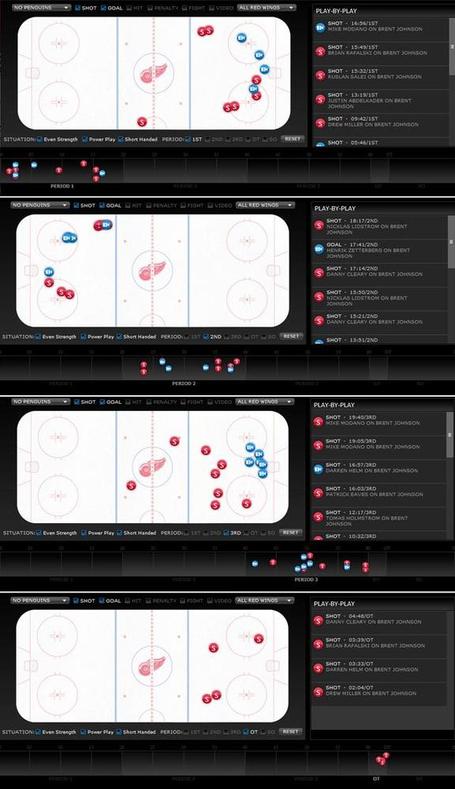 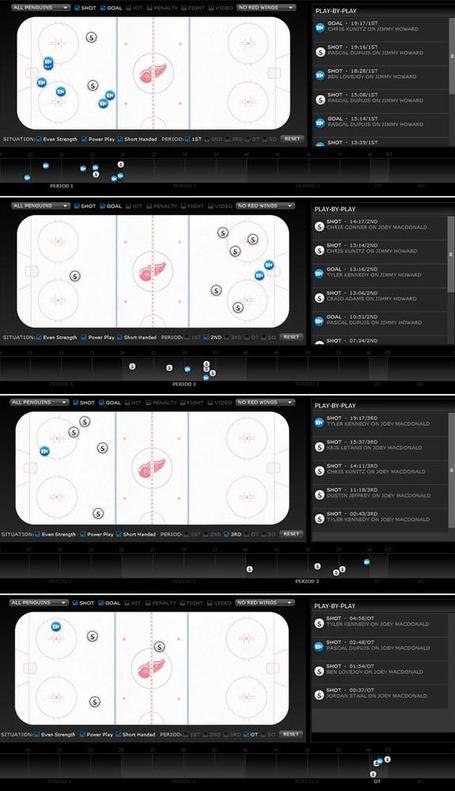