A Study of Lidstrom's Plus/Minus Rating

Share All sharing options for: A Study of Lidstrom's Plus/Minus Rating

The 2010-11 NHL season is in the books.  The Red Wings now must get ready to face off against last year's opponents the Phoenix Coyotes in their chase for the franchise's 12th Stanley Cup and 5th in the last two decades.  A constant on each of the previous four cup championship teams, Nick Lidstrom is a surefire first-ballot Hall-of-Famer and the current captain of hockey's most successful franchise of the recent era.  The Perfect Human, as those who have marveled at his play have taken to calling him, has absolutely gaudy career statistics and a trophy case that would make anybody jealous.  Aside from his four Stanley Cup rings, he's been a 12-time NHL All-Star, an Olympic Gold Medalist, a World Hockey Championship Winner, a Conn Smythe recipient, and a six-time Norris Trophy winner for being the league's best defenseman.

Lidstrom, who will turn 41 years old toward the end of this month, is regularly discussed as one of the top three defensemen ever to lace up skates.  Some hockey minds (mine included) think that the six trophies he's collected is a criminally low number.  He currently sits one Norris behind Doug Harvey, the defensive powerhouse of the mid-50s-to-early-60s and two behind Bobby Orr, the man credited with redefining the role of the defenseman in the NHL.  Lidstrom holds a career +430 rating.  This is why the rest of this piece is so painful to write.

For the first time in Lidstrom's career, he has just finished a season with a minus rating.  The -2 rating this season is his worst since a +7 rating in his sophomore campaign in 1992-93 (you know, the season that started when Jeff Skinner was five months old?).  Unfortunately, despite the statistics which show that Lidstrom plays against competition more than twice as tough as and a quality of team rating significantly lower than the next-closest of the Norris favorite candidates, and despite the stats which show that Lidstrom is the only offensive powerhouse who also plays defense, there is real worry that one of hockey's most flawed individual statistics will cost the best all-around defenseman in hockey his seventh Norris Trophy.

Let's take a look at some of the reasons Nick Lidstrom might find himself a Norris runner-up because of his plus/minus.  Follow me after the jump for the primary suspects.

Second only to Johan Franzen in goals scored for the Wings this season, this tough-playing net-front board-battler showed a season-long habit of leaving the defensive zone a little too early and getting back on his checks a little slowly.  As a winger, Cleary deserves less blame than a centerman playing in similar situations, but nobody on the team had a worse shared plus-minus rating with the team's captain.  Lidstrom shared 31% of his total five-on-five ice time in games Cleary played (7th among players), but nobody else approached the same -9 shared rating.  Whether by luck or by defensive problems, Cleary's lead in shared plus-minus was 44% worse than the next-lowest rated players.

Arguably Detroit's most-valuable player this season, Zetterberg somehow simultaneously managed to elevate his game without Datsyuk in the lineup while struggling under the same circumstances.  His -4 shared rating with Lidstrom is the exact rating he had in the games which Pavel Datsyuk missed with injury.  In the 51 games those three shared, Zetterberg and Lidstrom had an even rating.  Zetterberg didn't play the season poor defensively, but for 5-on-5 ice time, the two shared more than half of Lidstrom's minutes.  While I'd more readily put the blame on the wingers these two had for most of the season, it's Zetterberg's job as an assistant captain and likely future leader of the club to help adjust to the tough assignments they were given together.

Speaking of wingers that shared ice time with Zetterberg and Lidstrom, Johan Franzen breaks the simplified mold of shared plus/minus to show how relying so heavily on a contextual statistic can get a person in trouble.  Looking at official plus/minus ratings or at the chart above, it would be an easy conclusion to make that Franzen did not play very poorly defensively (or, more correctly, that his production was enough to overcome defensive lapses).  However, when we're looking solely to fault people for Nicklas Lidstrom's plus/minus rating, It's important to note that goal-scoring wasn't a problem for the Wings this season, but keeping the puck out of their own net was.  Among all of Detroit's forwards with at least 20 games, Johan Franzen had the worst overall difference between his CSSI Adjusted Plus/Minus Number and the official number.  Franzen did have the production numbers to overcome his defensive lapses overall, but he was not good defensively this season.

Kronwall is another prime example of needing to use the narrative of the season to describe the numbers.  By CSSI Adjusted Plus/Minus, he was the Red Wings' 2nd-best defenseman; but looking at shared plus/minus, he struggled mightily.  They both work to tell the story as it goes, though.  Kronwall started the season well, had a big struggle in the middle, and then finished well.  If you look at what happened, you'll see that 78% of the ice time that Kronwall shared with Lidstrom came in the 15 games that Brad Stuart missed from January 7th through February 17th.  Those games also account for -4 of the -5 shared rating that Kronwall had with the Nick with a "C".  It's perhaps a gross oversimplification, but a big part of the trouble that pairing had during that stretch (aside from other injuries to the team) was Kronwall's adjustment from moving from the left side of the pairing to the right in deference to Lidstrom's favored position.

Detroit's goaltending this season, led by Jimmy Howard, was able to get the job done most nights, but the overall stats were less-than-stellar.  Howard might have tied for second place in wins, but the overall save percentage for all of Detroit's goalies was a disappointing .908.  Want to know what kind of effect that had over the Norris candidates' plus/minus ratings?  Lidstrom was on the ice for 730 shots against at even-strength. Let's take a look at what Boston's and Nashville's goaltending numbers would have done to Lidstrom's rating.

Do you think anybody would be seriously talking about other Norris candidates if Lidstrom had the benefit of working in front of the league's two best goaltenders this season?  I'll grant that there's no way to know how much of the team's save percentage is attributable to one player, nor would I hazard a guess as to how playing for a different team would affect Lidstrom's shots against total, but getting things as equal as I can here, these numbers are very telling.

When it all comes down to it, there's one person responsible for pitting Nick Lidstrom against the toughest foes while offering the smallest amount of help to his star defenseman.  That man is Mike Babcock, the coach of the Red Wings.  Sometimes a bit too stubborn for his own good, Babcock might have altered his pairings, but he's not strayed from the concept that your best all-around defenseman is properly utilized in situations that call for your best all-around defenseman.  If he's a softer coach more concerned with individual records or the feelings of his players, he might have tried to hide Lidstrom from the tough minutes, to have isolated him from other team's top lines and top players.  I think he made the right choice this season, but when we're talking about the chances of Lidstrom losing an individual award, Babcock is a big part of the reason why. 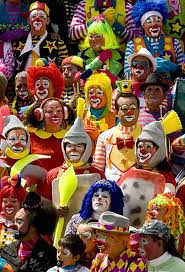 I kid, of course.  But seriously, this is a group that had a member give Alex Ovechkin a first place Selke vote last season.  As a whole, the PHWA is a fantastic group made up of very caring and knowledgeable individuals.  Unfortunately, some of them are more caring and knowledgeable than others.  I'd say any one of them who leads off with an argument about the most team-dependent statistic being the reason Lidstrom doesn't deserve the Norris Trophy without any other reasoning or attempt at context deserves scorn.

Seriously though, I'm not calling them all clowns

Ok folks.  one last person to get to in this list.  Possibly the most important one among the group:

Yes, the man himself.  If Lidstrom doesn't walk away with the Norris this season, he'll have himself to blame for two reasons:  One) because he spent his entire career building his own legend to a nearly unmatchable level and Two) because he hasn't matched it this season.  Throw the excuses and the logic out: Lidstrom competes against his own shadow when it comes to being recognized for his greatness.  He's played well given the circumstances this season, but if he were as dominant as he once was, we wouldn't be having this conversation.  Ultimately, Lidstrom has lost a step from those days, possibly two.  However, when you start out five steps ahead of everybody else, you have a few to lose before you're not still the best defenseman in the NHL.  Lidstrom deserves the trophy this year and it would be sad to see it go to somebody else for a bad reason.

[Ed Note: I'd be remiss if I didn't note the great statistical contributions of Gabe Desjardins and Vic Ferrari in compiling the numbers for this post.  Gabe's site, Behindthenet.ca is a fantastic resource for a ton of ratings and counting stats that the league doesn't track.  Vic's Timeonice.com was an invaluable tool for compiling the shared ice time numbers and shooting stats.  You can find more of Desjardins' work in stats and editorials about what they mean at SB Nation's BehindTheNetHockey.com.  Vic also contributes posts to Irreverent Oilers Fans]