So Graham, Casey, and I were talking the other day and the subject of Mike Ricci came up.  Since we're all juvenile, the conversation immediately veered to how ugly a man he is; it went a little something like this:

I met him at a roller-blading thing in Toronto a long time ago - he was a super nice guy, but I almost threw up when I saw him in person.  I expected him to ask me 3 questions before I could continue roller-blading

Since we're all nerds, that immediately transitioned into whether Ricci would know if he were asking about an African or a European swallow.  If you know us and read the title of this post, you know where things went from there.  Some arguments were had, some sisters received møøse bites, and everybody responsible for this intro has been sacked.  Join us below for our look at which Red Wings would play which characters from 'Monty Python & the Holy Grail'.

First off, Mike Babcock is God here:  He glares angrily, he hates when people avert their eyes, and he charges every one of them with a quest in these dark times to retrieve a magical cup.  Also, all of his ideas are good ideas (of course!).

Henrik Zetterberg is King Arthur:  He will lead us on our quest.  If you've seen the wedding pictures, you know he's no stranger to farcical aquatic ceremonies.  Besides that, he definitely rocks the beard.

Nick Lidstrom is Sir Bedevere, the wise:  He is well-learned in the ways of science and a solid, yet unassuming presence wherever he goes. 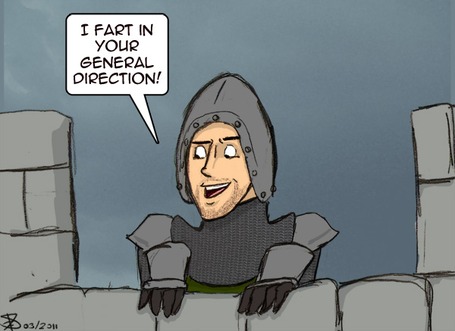 Pavel Datsyuk is the French Castle Guard:  He's hilarious and has a funny accent.  Also, his wind-aided goal in the Winter Classic must have been caused by farting in your general direction.  Don't mess with this guy unless you want to get crap dumped on you.

Franzen is Roger the Shrubber: He comes through for you at just the right time and is willing to stand up to bullies.  Also, his beard is pretty shrubby

Dan Cleary is the Black Knight: A man of few words, he knows no fear.  Even without arms and legs, he will never stop working to try and kill you.  Also, no matter who he's fighting on the boards, none shall pass.

Mike Modano is Patsy, King Arthur's page: Graham sums it up perfectly: He's a minor character, even though played by one of the main actors in the group, and he's there simply as a supporting character with little to no expectations

Valtteri Filppula is Sir Gallahad the pure: As if the name isn't fitting enough, he's the one in the film who has a whole castle full of women fawning over him. 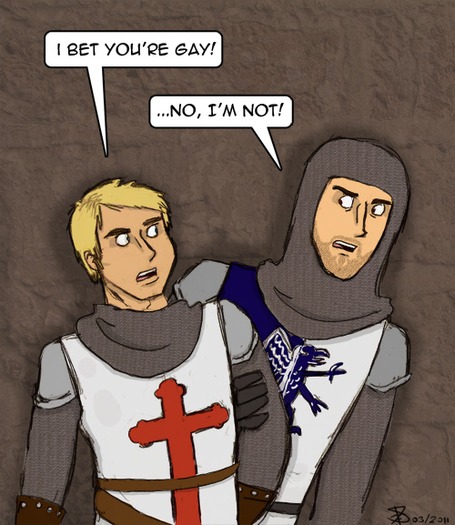 Todd Bertuzzi is Sir Launcelot: The only member of the knights who once brutally slaughtered an entire wedding party, he's sometimes a little over-anxious to do his duty, but he's as brave as anybody.

Justin Abdelkader, Darren Helm, and Patrick Eaves make up the Three-Headed Knight: You can just see these three arguing amongst themselves as to whether they should kill you or be nice to you.  Aside from that, the three of them work well together and are scary to face.

Drew Miller is the Witch: Ok, yeah, we put that nose on him, but he does have a wart and has been known to turn people into Newts.  What really makes it fit for him is that he weighs the same as a duck.  Hell, he even used to be a duck.  I propose that therefore, he is made of wood and is a witch.

Kris Draper is the Old Man Who Doesn't Want to Go on the Cart:  He's not dead yet; and he feels happy.  There's no reason to force him to go on the cart yet, but he'll be stone-dead in a moment if you could just wait around a bit.

Jiri Hudler is Sir Robin the Not-Quite-So-Brave-as-Sir-Launcelot:  he spends the entire film shying away from contact and even clucks, like the chicken on his shield.  (bonus: the fans are his minstrels: always singing about what a coward he is) 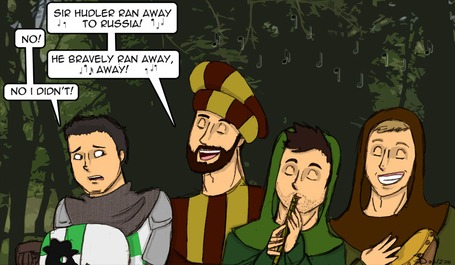 Brad Stuart is The Legendary Black Beast of Aaaaarrrrrrggghhh:  He's gigantic and scary and lurks in the shadows to defend places where questing forwards want to go.

Ruslan Salei is the Castle Guard from the First Scene:  He may not fit in perfectly, but nothing gets by him.  As soon as he figures out how exactly coconuts migrate, he'll fit in fine. 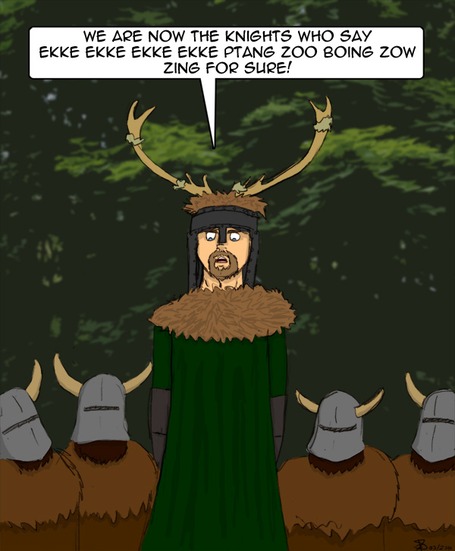 Tomas Holmstrom is the Knight who says Ni: That's about as much grasp as Holmstrom has over the English language to begin with.  Add that to the fact that he's impossible to move out of your way and what is most likely a weird obsession with fish-based deforestation techniques and we've got a perfect fit.

Doug Janik is Dennis the Peasant:

Old Woman!
MAN!
Man, sorry.  What knight lives in that castle over there
I'm #37
What?
I'm 37, I'm not old
Well I can't just call you "Man
Well, you could call me "Janik"
I didn't know you were called "Janik"
Didn't bother to find out, did you?
Well... no... I figured you wouldn't be around long enough for it to matter, really

Chris Osgood is Zoot from Castle Anthrax:  Naughty, naughty Osgood, always turning on that (red) light.  Also, we're pretty sure that by now, he enjoys spankings.

Niklas Kronwall is the white Bunny: Just a harmless rabbit you say?  He doesn't look dangerous, but that Kronwall is dynamite!  Just know that when you're going through the neutral zone, that if you do doubt your courage or your strength then go on further, because death awaits you all with nasty, big, pointy teeth. 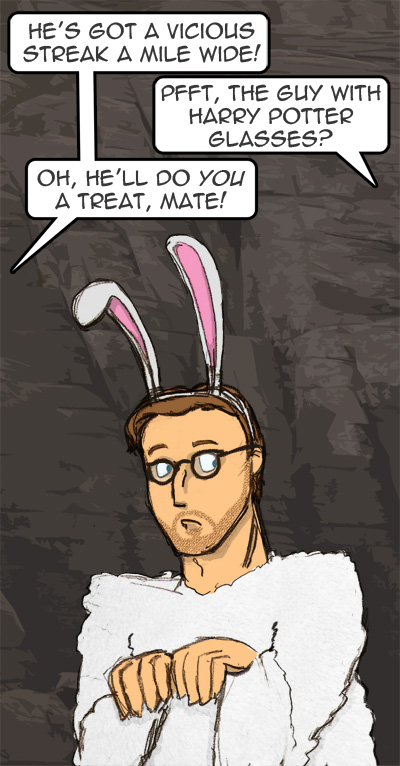 Jimmy Howard is the Enchanter: What manner of man can summon great stats while unproven in net?  There are some who call him... Jim?

Jonathan Ericsson and Jakub Kindl are the King of Swamp Castle and his guard:  That whole scene is all about trying to figure out who exactly is supposed to be guarding whom, leading to frustrating results.  If there's a better match, I'd like to hear it.

[All artwork in this post is the awesome result of resident vixen of The Production Line Stevie Roxelle.  You can catch more of her great work over at TPL or follow her on Twitter @StevieRoxelle]