As the game of hockey itself has evolved over time, with the introduction of new defensive styles, new technology, and new means to get information to the masses, so too has the landscape of hockey fandom. Although there's merit to the discussion that what happens with hockey fandom mirrors the geopolitical zeitgeist of North America and is more revolutionary than evolutionary, that's a conversation to have over much fancier glasses of brandy and much more expensive cigars (also, don't worry, I punched myself very hard for typing out "geopolitical zeitgeist" in a hockey article). Regardless of where it fits in on a grander scale, there is a certain call to order among different groups of fans that are not separated by traditional fan allegiances, but by a more reflective vision of an individual's place within the greater scope of fandom.

Yes, I'm talking about those annoying buzzwords "mainstream" and "underground". Words which used to create the distinction between the professional writers and the lowly bloggers have changed not to create separation between two forms of media which have grown fondly (and sometimes not-so-fondly) together, but between schools of thought. Whereas "mainstream" used to announce a certain authority behind a source and "underground" a darker, wilder, and more visceral side of the media, it has since been stolen away from its original connotation by anti-authoritarian figures, those self-appointed Ayn-Randian visions of malcontents and the jaded, who question all that is popular under the guise of what is little more than masturbatory megalomania.

But, I can already hear you screaming for me to get to the point and, since it's obvious that satire isn't my strong suit, I'll drop the pretentious crap if you'll just follow me through the jump. Deal?

Ok, sorry about that. To boil it down (and in the process oversimplify), there's a growing group of hockey fans who exist simply to hate everything they think the majority likes and to love everything they think nobody pays attention to. While this is a wider social phenomenon than within the hockey blogosphere, I only feel qualified to comment on the hockey aspects. After all, I'm a guy who considers a $100 pair of blue jeans to be the kind you buy at Wal-Mart and stick four twenties in the pockets; I don't have a lot to say about fashion. Also, this is kind of a hockey blog, so it's probably better just to stick with that.

The hockey hipster is ultimately not as different from "mainstream" fans as he or she would have you believe; it's just that the rooting interests have changed. While you, I, or any other sane, smart, beautiful, and witty person roots for the Red Wings, the hockey hipster recognizes this and immediately starts questioning why we should be doing the only rational thing there is in the hockey world (to root for the best possible team). Too smart to be an outright troll (in most cases), the hockey hipster knows that he will never fully understand what it is like, but does not accept this. Instead, he rationalizes that the best way to be a fan is stoicism; nothing but cold, hard, and unfeeling logic can bring a person to his apex of self-fulfillment as a hockey fan. Those fans who are swayed by the emotions their team brings out may have a good thing going within their own circles, but to an alien observer, they are little more than mindless experiments; they are mice trapped in a maze searching for cheese. If there's one thing a hipster hates, it's to be embarrassed in front of those he judges to be objectively superior, even if they don't really exist.

The hockey hipster isn't really concerned with universal truth or the unwritten laws of the universe that says objectivity is the key to feeling better about yourself. These people are human too (in most cases). They have no better grasp on objective truth than anybody. When all of reality is a subjective place, the view of the alien observer is impossible to measure. Instead, what they're doing is looking to entertain themselves cheaply by digging into something that is much easier to predict and control than the outcome of a sporting event: human emotion. 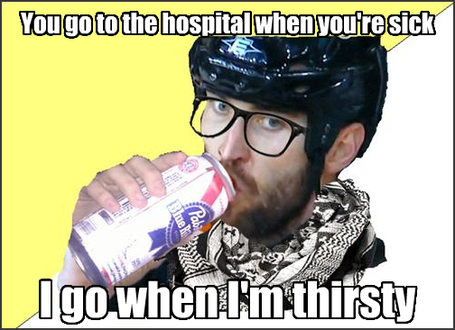 I honestly don't know whether Detroit will win the Stanley Cup in the coming season (yes I do), but I do know that if I go on Twitter, oh and were to say ..."Chris Osgood is a terrible goaltender who doesn't deserve to be in the Hall of Fame" that something interesting is going to happen; I know that people are going to react. I'm not necessarily trolling in the strictest sense of the word, but I'm manipulating people for my own entertainment. If I'm not emotionally bonded to that concept, then watching people overreact actually can be fun in a dark and twisted sort of way. It's a way for me to cause others to react while having none of the easy traditional buttons for a counterattack. Of course, that's the same thing which should drain power from them. Somebody who claims not to feel the emotional highs and lows that come from rooting for an individual team lacks the proper perspective from which to make a judgment on it, no?

The truth of the matter is, hockey hipsterism isn't all bad. The difference between a wannabe stoic who is trying to stoke fires of conversation and an idiot troll comes down to intellect. While there are many things that can cause a person to go hipster (I think the most common among them is growing up rooting for a team that has sucked for a long time), they do bring interest to the conversation. They work as a sort of check for the other extreme of people who wear their sports hearts on their sleeves (and would go so far as to threaten or even carry out physical violence over the outcome of a sporting event). Hockey hipsters are a mirror to our own emotions about our team. Sure, most of them are more like funhouse mirrors that intentionally twist, minimize, enlarge, and otherwise distort the light they're reflecting back at us, but that would only be bothersome if we didn't realize that we were in a funhouse. In the end, a mirror is just a tool.