Shortly after the Wings' season ended, I got an email from reader ChuckyD about the CSSI and some ideas he had to make improvements to the stats-tracking system. Turns out he knew a thing or two(hundred) about programming and we started working together on what would be available for next season to make the tracking and adjustments that much better. As the season nears, so does the finished product, and I can say that what ChuckyD has put together so far will likely liquefy your brain. CSSI next year is going to be incredible.

As part of the system he's working on, ChuckyD has been playing with the stats to bring them into a database like I haven't seen anywhere else. Everything is getting ready to go into final testing, but individual stats tests have confirmed that his data is accurate and, as a result, I've been glued to a specific piece for a few weeks now. Part of the system tracks shared time on ice for every Red Wings player as well as goals for and against stats.  I wanted to take a deeper look at those stats to see what they could tell us about last season.

For today's look, I went through shared ice time and GF/GA for every combination of forwards who played over 30 games (leaving out Mursak, Tatar, and Emmerton) and I created what I like to call a scoring efficiency index.  Keep following through the jump for more.

First off, all shared ice time for this was even-strength only (to include 4-on-4 time). Times and goals for odd-man situations is not calculated here.

To get a player's efficiency, I first took the time on ice that Player A shared with Player B as a percentage of his total. This number was then compared to the percentage of goals for and goals against that Player B was on the ice with Player A for.  The overall efficiency was the total of the differences between GF and GA (by percentage) and the time shared, by percentage. If Player A was on the ice for 25% of all of Player B's even-strength ice time, you would expect that Player A might also have been on the ice for 25% of all goals scored for the Wings during Player B's ice time and for 25% of all goals scored against the Wings during that time. Here's an example:

So, Pavel Datsyuk was on the ice for 28.09% of Danny Cleary's even-strength time, but the Wings scored 38.10% of all the goals they had with Cleary on the ice while Datsyuk was there and the opposition only scored 22.73% of the total goals against. Comparing the percentages, Datsyuk's overall effect on Cleary is 15.37% (subtracting goals against from goals for, because having a negative number in goals against percentage is the preferred result).  Going the other way, we can see Cleary's effect on Datsyuk.

Cleary's effect on Datsyuk is slightly lower at 7.01%, but it is still a positive difference. This goes to show that Cleary and Datsyuk work very well together. They shared significant ice time, so the sample size has less of an affect than a significantly smaller one.  I did these calculations for every forward on the wings and I ended up calculating the sum of the total combined both for a teammates' effect on player and a player's effect on all teammates.  This led to some pretty wildly differing numbers, especially in one player's effect on all of his teammates (Abelkader's total was 97.92% compared to team-lowest Hudler's total at -69.28%).

The obvious problem with this totaling method is that if a guy spent less than a minute total playing with another and the Wings just so happened to have scored two goals, he would appear to have a very large effect on his teammate and would explain such large swings between players. Pavel Datsyuk was only on the ice for about 1/50th of Patrick Eaves' ice time, but he was also there for 1/12th of the goals scored. While it's no stretch to say that Datsyuk makes his teammates better, the trouble you get into is in saying that any two players should share more time because of such small numbers.

To correct for this, I weighted each players' efficiency scores against what percentage their shared ice time made up of the entirety of the team's shared ice time with that player.  Datsyuk's time with Eaves was only 1.01% of all the time everybody shared with Eaves, so his efficiency score made up only 1.01% of the grand total.  Doing this brought the range of differences down from a 167.2 point spread to a more meaningful 18.2.

With that done, let's take a look at the chart: 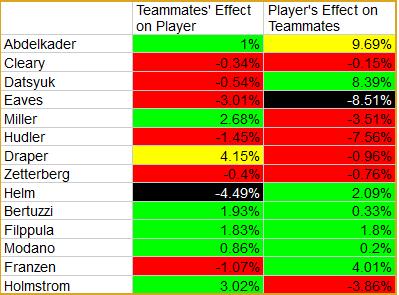 The first thing that jumps out at you is how in the hell did Justin Abdelkader lead the team in efficiency impact? The numbers tell that only three people saw the Wings scoring at less-than-expected averages when sharing time with Abby (Hudler, Bertuzzi, Filppula).  Meanwhile, only 3 players saw more goals against than expected with Abby on the ice (Datsyuk, Draper, and Zetterberg).However, before we break out the calls for Abdelkader to join the first line, let's get a heaping helping of context to pour over this pile.

First, you'll notice that Abdelkader led the team in plus/minus rating this season the same he leads the team in this category. It makes sense, as the two are based off of pretty similar context. As is such, some of the same things that can inflate or deflate a plus/minus score can play with this one as well.  For instance, Abdelkader started 58.3% of his shifts in the offensive zone. That is the highest number on the team (compared to Zetterberg's lowest-among-forwards 47.6%, that makes a huge difference). What's more is that Abdelkader was near the bottom of Red Wings' forwards for Quality of Competition scores (from Behindthenet.ca). Finally, while there are no numbers anywhere that track momentum of games when a player comes onto the ice on-the-fly, a season's worth of watching the games indicated to me that Abdelkader was used more as a forechecker to maintain momentum between shifts, rather than try to recover it while the other team was coming on hard.

Now, compare that to Datsyuk's numbers, knowing that Datsyuk was given much tougher assigments, only 47.7% of offensive zone starts, and a lot more ice time and you get a good contrast between a player that truly does make those around him better and a guy who might do that, but probably not nearly as much as the game situation does.

Zetterberg and Cleary are both interesting cases looking at this, because context-free, it looks like their teammates hurt them and they hurt their teammates. More likely what these numbers tell us is that these are to very versatile players who fit nicely wherever they are. The numbers of those two may be negative, but they are very close to zero. What this tells us is that, regardless of situation or teammates, they're going to to keep doing their jobs.

Helm and Eaves here are a bit of a special case of two people who shared a lot of a specific kind of ice time hurting one another.  These two led the Red Wings in time spent on the PK. While that time wasn't counted for the chart above, what was counted was all the time they were on the ice at the end of a penalty and had to keep playing a defensive role.  Now the CSSI plus/minus wrap-up shows that neither of them had a minus cleared for a goal scored between the time a penalty ended and the player got back into the play, but it does not account for what essentially becomes a defensive zone start for the purpose of the final rating and what kind of hit that can put on a pair's expectation to score and prevent goals.

What is not adequately accounted is that Jiri Hudler was just behind Eaves for worst efficiency effect on his teammates. Hudler played exactly zilch on the PK this season and got more PP minutes than Filppula, Bertuzzi, Cleary, or any of the bottom-six guys. Hudler started in the offensive zone 57.3% of the time, just one percent lower than Abdelkader. When given the fact that he was handed a better opportunity to succeed than several of his fellow forwards, Hudler had a highly negative effect on his linemates due to his streakiness. If not for the hot streak he went on when paired with Datsyuk and Cleary in early February, this season would have been a complete disaster for him instead of just a partial one. I honestly hope he plays well this year and shuts everybody up (because I'm a Wings fan and why the hell wouldn't I?).

At any rate, this post was a bit longer than I expected. Please sound off in the comments with anything else that struck you.  As an apology for making you read through all of that, here's a puppy. 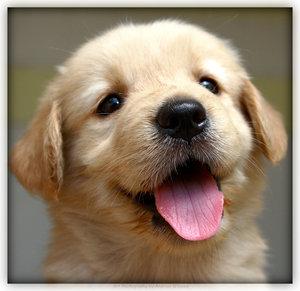