Share All sharing options for: Fun with Graphs: Lidstrom and Kronwall's Pairing

Yesterday I hinted at a new system that reader ChuckyD is helping us roll out for the upcoming season and all the good things that it will give us the power to do. One of those benefits will be the hockey nerd's dream: graphs.

For an example, I wanted to revisit the concept of Nick Lidstrom's plus/minus rating and specifically the effect that playing with Kronwall had upon that rating. Earlier in the offseason, we put up a post exploring Lidstrom's -2 overall rating and the various things which had a negative impact on it. Among those things was sharing ice time with Nik Kronwall.

Now there are a lot of factors that tie into what happened during the six weeks between January 7th and February 17th that Brad Stuart missed with a broken jaw (particularly Datsyuk's also missing all of the same games up until February 7). While this chart doesn't tell us the whole story, it tells us quite a bit: 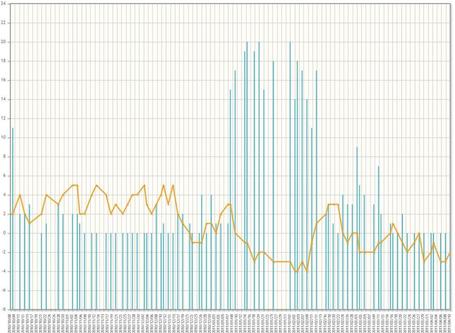 The bars are the shared TOI of Lidstrom and Kronwall each game. The yellow line is a running tally of Lidstrom's plus/minus.

The Wings went 8-6-1 during the stretch of games that Stuart missed, and it wasn't all the doing of that pairing, but this chart goes to show that even switching from one side of the same position to the other can be very difficult for a pro hockey player.