Weekly Hate: Me and Conclusion-Leaping

Share All sharing options for: Weekly Hate: Me and Conclusion-Leaping

Friday, August 19th has come and gone without a major incident in the world of the NHL. The February 11th game between the Islanders and the Penguins which ended in 346 combined penalty minutes and 11 game misconducts which was to be aired as part of a MSG summer replay series and was to have a viewing party hosted by the Islanders (as was also part of a summer series of theirs) stayed in the vault, where I and many other people said it belonged. Fortunately, even if the game was an embarrassment to the league which caused Mario Lemeiux to famously question whether he wanted to take his ball and go home, the league has yet to take it out of their GameCenter vault.

I was challenged by a reader of Lighthouse Hockey who is a commenter I am familiar with through a few different sites whose opinions I respect. The idea was that if I were to watch the game in its entirety to get a better view of the context, my mind might change about how that situation evolved.

I did and it did.

What follows is a recap of a game I started watching with the idea that this is not one that should be re-broadcast nor be made to look as though it was being celebrated in any way. A game where I believed an organization had crossed the line between fighting back and simply being out for blood with bad reason.

As far as previously established bad blood between the teams from the games of February 2 and earlier, I think the Talbot hit on Comeau was clean and everybody knows that Rick DiPietro didn't have to accept a fight with the much larger Brent Johnson (who didn't have much reason to cross center ice and challenge DiPietro in the first place). Those acts are not the kind of things that warrant retribution, but the overall attitude that the Penguins projected on the Islanders was disrespectful. That's not to make a value judgment on whether the Islanders deserved respect, but pretending like a team can disrespect another team as much as the Penguins did to the Isles and not have to answer for it would be naive.

Both teams started the game in Long Island as the second of back-to-back nights. The Islanders had played Montreal the day before while the Penguins met the Kings at home. This explains why Brent Johnson got the start. I mean, there's nothing like parading out the guy who broke a franchise goalie's face in front of that franchise's home crowd, right?  The first period of the game came with good pace and some hard-hitting, but not a lot of the cheap stuff, net-front scrums, and trash-talking we've come to expect from grudge-matches. Haley and Adams fight about halfway through the period and then Godard and Gillies go immediately after an Islanders' PP goal, but after throwing a few bombs back and forth, they eventually mutually decide they'd have enough and skate away from one another.

Late in the period, Kris Letang (who is already having a god-awful game) beats up on John Tavares a bit, giving him a few shots that I thought could have been called penalties. Tavares loses his cool and gives Letang a chop on the foot pretty similar to the Johan Franzen love-tap that ended Joe Thornton's life in the playoffs (according to Thornton's reaction, at least). Yeah, Tavares shouldn't have retaliated, but by the end of the first period, this game wasn't quite the bloodbath that the announcers were promising would come.

The second period is really where things get out of hand. The Isles are already up 4-0 by the time the puck drops and find themselves up 6-0 just 3:46 into the period as Michael Haley, the AHL goon called up specifically for this grudge match game, makes Kris Letang his bitch by walking around the guy and sliding it under Brent Johnson. Unfortunately, being up 6-0 is apparently extremely liberating and gives Matt Martin the idea that skating up behind Talbot and sucker-punching him is a good idea. This sets off a three-fight scrum which ends up in Martin, Josh Bailey, Travis Hamonic, Deryk Engelland, Pascal Dupuis, and Mike Rupp getting game misconducts. This is the first of two unforgivable acts by Islanders' players in this game.  Unfortunately, Trevor Gillies was on the bench when it happened, steaming about how he wanted his chance. 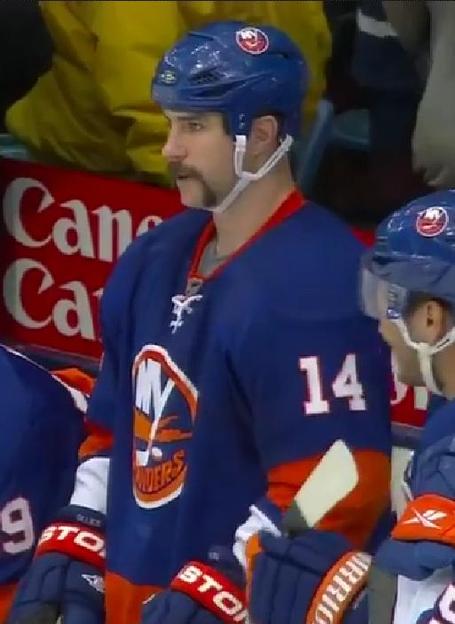 The still-frame doesn't do it justice, but he's actively trying to pull his bottom lip up over his nose

If Gillies had been on the ice for this crap, he likely would have gotten a game misconduct and thrown out at that point, avoiding the thing that really marred this game.

But, before you get to feeling too badly for Max Talbot being the victim of a brutal one-punch before he could turtle, take a look at what he tries on Tavares five minutes later: 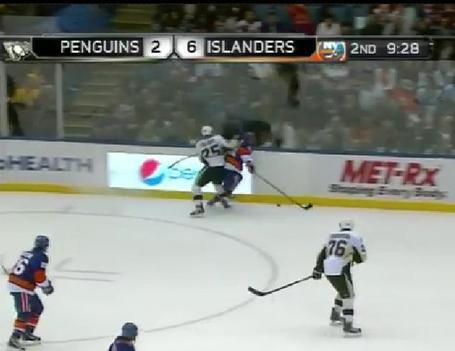 That, my friends, is an elbow just missing the back of Tavares' head

Watching the entire game, this was just one instance of Penguins players targeting Tavares. They were after him the entire game with little cheap slashes, attempts to hit his head, and late shots in the back. Granted, Talbot pulling this five minutes into the future isn't a good enough reason to excuse Martin for sucker-punching him in the first place, but I'm not trying to defend Martin here.

The rest of the 2nd period is again not very indicative of the grudge-match beatdown that this game has become. In fact, the next bit of crap that comes is when Godard pops Hillen in the face a couple of times and gets a roughing penalty while Hillen actually keeps his cool.  Ultimately, I'd say that at this point, the level of cheap shots for each team is just about even.

The third period is where the most-unforgivable act takes place. Just about 4 1/2 minutes into the period with the Islanders up 8-2, Trevor Gillies skates halfway across the ice to blindside Eric Tangradi and bounce his head off the glass. Gillies immediately tries to throw with Tangradi (who is concussed at this point) and this sets off another round of fights. Gillies is pulled off of Tangradi and sent off the ice to the runway about 15 feet away where he stands there and taunts a concussed man. While all of this is going down, Michael Haley grabs Talbot and gives him another beating. After that put-down, Haley separates from Talbot and skates at Brent Johnson, who goads him into another fight. Before they can properly get at it, Haley is grabbed by Eric Godard coming off of the bench to make it a 2-on-1 beating.

Allow me to pause a minute to cover this part. Trevor Gillies should have no place in the NHL until he learns to be sorry for what he did here. As far as hockey attacks go, I view this one in the same light as the McSorley assault on Brashear and the Bertuzzi assault on Moore. This was a case of a player who was looking for blood and premeditated an attack on a person which could have killed him. 9 games was too light a suspension for Gillies, as was the subsequent 10 game ban he received on his first night back.

That said, Gillies wasn't wholly unprovoked and Haley's beating on Talbot wasn't a case of trying to get him back for turtling. This is what happened only a few seconds short of Gillies' hit on Tangradi: 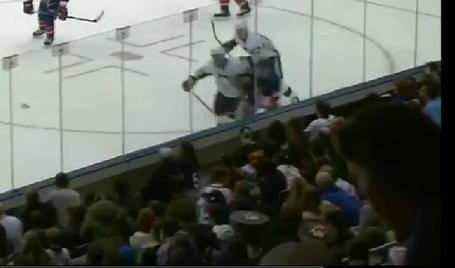 That's Talbot blindsiding none other than Trevor Gillies. Haley is actually trying to get Talbot to answer for this hit when Gillies pulls his ridiculous caveman stunt. This does not absolve Gillies in any way, but it makes what he did slightly more retaliatory and slightly less premeditated (although that doesn't change my opinion that he should have been suspended the rest of the season, nor does it make me believe that there wasn't a large portion of premeditation involved in the attack on Tangradi).

What it does do is makes me actually glad to see it when Zenon Konopka grabs Talbot during a late third-period scrum, hits him in the face, drags him to the ice, and gives him a stern talking-to.

The rest of the game follows the script of two teams with incredibly short benches and incredibly short tempers. The game ends with the Penguins having two players on the bench available for line changes and the Islanders with a pumped-up crowd of under 13,000 cheering them on. Martin would be suspended four games for sucker-punching Talbot, Gillies would get nine for assaulting Tangradi, and Godard would get ten games for leaving the bench to fight. The Islanders' organization would get a $100,000 fine for the antics in the game and Mario Lemieux would threaten to leave hockey if stuff like this would keep happening.

Here's the problem. I bought into the entire concept that the Islanders were the unforgivable bad guys thing based on media outlets I trusted and replays they showed. Watching the actual game itself, I got a completely different idea of what actually happened. I finished up the game with the same idea that Islanders fans have been saying all along: that game was a team standing up for themselves against a league that disrespected them and a team that embodied that disrespect above all others. I found myself actively rooting for Islanders during each of the fights. The Penguins were not innocent victims in some horrible circus of a game. The beat-downs didn't start from the get-go and didn't end when the final whistle went. For the most part, the Isles played better hockey than the Penguins and stood up for themselves against what was a dirty team.

As is such, I admit that I jumped to a hasty conclusion about this game and whether it should be aired by MSG and/or celebrated with a team watch party. Having seen the game in its entirety, I think that both of those things should have been allowed to happen. I still can't separate the game from what Gillies did to Tangradi. I approve of the $100,000 fine that the Islanders were made to pay and I absolutely think that the suspensions to both Martin and Gillies should have been longer.  Two times in the game, Islanders player crossed the line between standing up for themselves and attacking people and i think they should pay for that.  I also think that Dan Bylsma should have been fined and suspended for his complete inability to control his bench (not to mention his blame-the-victim speech about the hit that Matt Cooke laid on Fedor Tyutin  just three days prior).

However, I think Puck Daddy's Greg Wyshynski summed it up best:

This isn't to condone the Islanders' actions against the Penguins that night, which encompassed the worst aspects of premeditated violence in hockey and made Trevor Gillies(notes) the mustached face of perpetual thuggery. (Getting another suspension on the night he returned from his previous one remains an impressive feat of meatheadedness.)

But many Islanders fans embraced the chaos as something important on a personal and on a franchise level when it occurred several months ago; to retroactively condemn it now would be the real hypocrisy.

Instead, they and the team are owning it. If they're willing to wear a black eye like a symbol of fortitude, it's theirs to wear.

For jumping to a conclusion without all the facts, I suck.