Welcome to Thursday and hopefully the permanent home of this post. Last week we had a ton of good entries, but none was quite so popular as Michael Petrella's. 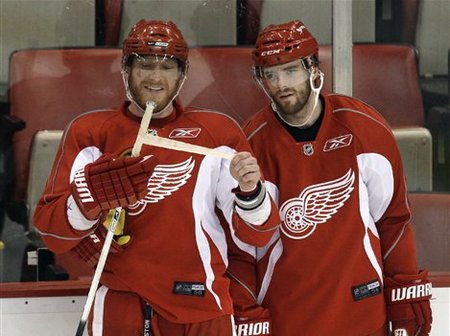 Might I just say "Hahahahaha!" I knew that pic would turn up gold (Jerry; gold!)

There was one runner-up and a ton of third-place finishers. Our own Graham took 2nd place dropping this on us:

If only Kopecky could pass the puck as well as he could pass love notes.

The three third-place finishers were dougflutie, 42Jeff, and J_Stone, whose comments are in that order.

(Ed note:  I love it when they work on multiple levels like this one)

It wraps the tape upon the stick, or else it gets the bench again...

I also want to throw an honorable mention to a late addition, added to the post on Tuesday. It only got one rec, but that was me and I thought this one was too good to bury in obscurity. Newcomer Barb gave us an original and funny joke that I'm kicking myself for overlooking:

Great work, everybody. These are getting to be my favorite part of the week.

As such, there's a new pic this week. Like always, the rules are the same, you caption the big banner pic at the top. Voting will be done on the recommend system again. If you like a comment, click "Actions" beneath the comment and choose to recommend it.  You may rec as many comments as you'd like, but you can only rec each one once. Good luck and good captioning!

Also, if you have any pics you'd like to see in the caption contest, please email them to me (JJfromKansas@Gmail.com) or Graham (Amerinadian19@Gmail.com). Thanks!