Share All sharing options for: Weekly Hate: The Amway Deal

The Red Wings' presenting sponsorship deal with Amway still has people searching lost-&-found bins for their collective shit. By now, you've either read the article by Gordon at Hockey Independent or took in the sheer scope of the rant, said to yourself "tl;dr" and went with the summary "dude's pissed." Hopefully by now, you've also read Eight Legged Freak's rebuttal to Mr-named-after-Mister-Hockey-himself. Still, let's see if I can concisely capture the original article and the previously-written rebuttal.

Truly disgusting. In every sense of the word, this is a shot at the Red Wings’ fanbase. If you’re reading this, and care about the Red Wings, you should be outraged.

Sorry you feel that way Gordon, but instead of pouring gasoline all over yourself and running around screaming that you're the world's biggest Red Wings fan, and that Mike Illitch and Co. are out to destroy all clout they have as a franchise, maybe you should step back and look at the real driving force behind the decision: the economics of owning a hockey team.

We've just about beaten this topic to a bloody pile of Lemieux, but let's get to some of the stuff that's been said since and how stupid it is.

In the comments of his own article, Gordon promised us a rebuttal to some of the points that were brought up in that conversation. Unfortunately, responding to the criticism was not as important as spending a night writing up the original piece despite having "more pressing matters at hand."

Here's the thing: if you hate Amway and think less of the Red Wings because of this deal, then that's your call. I'm not participating in any boycotts and I won't go nearly so far as to *gasp!* UN-LIKE THEM ON FACEBOOK! But, if you want to, then I think we can part ways amicably. I don't consider myself a "better fan" or more of a "real" fan or a "classy person" or a "matador", but I can't help what the ladies call me.

That's all fine, but don't slather on the stupid when you're standing up for what you feel is integrity.

In response to a comment about Amway's relationship with the NBA, Gordon had this to say in response:

the NBA does have presenting sponsors, and Tom Wilson immediately jumped on board. The NBA is bleeding money, and will not be playing any games until at least February. By any standard, the Magic and the NBA are doing poorly…because if they weren’t, there would be basketball in November.

But there will not be. Because the NBA has been terrible, on and off the court for years. The NBA example is horrendous to follow.

Evil Knievel would take one look at the size of the logical chasm Gordon had to leap here and he would say to himself "fuck it". Yes, the NBA has presenting sponsors and yes, the NBA is not going to play this season. To even begin to imply any kind of causal relationship (which he is doing) is such an absurd post-hoc. It's like saying the Japanese bombed Pearl Harbor to avenge General Custer's death. Let's be honest here. The NBA does have a broken business model. They are not going to play this season because their league has not gone through what the NHL went through. Their players demand way too much money and the owners are all-too-willing to pay it. To say it's because of presenting sponsors ignores the fact that the NBA and NHL have roughly the same attendance, but the NBA's ratings destroy the NHL's (not to mention their TV deal pays about 4.5 times more).

Of course, this is all part of the article itself, where Gordon stops just shy of outright blaming Wilson for the turnaround of the Piston's success before backing off that point in saying "well, there are other factors".

That's my favorite part of the slippery slope. "Just wait until Tom Wilson gets his grubby hands on more power within the Wings". Ok, I'll wait. He's been with the Wings for over a year now and I don't have the slightest indication that Ken Holland even has to call him "sir." From all I can find, he's been tasked with "growing the brand" (Don't you worry about Planet Express, let me worry about blank). MLive at the time tended to think that he would be tasked with a purpose that many of us believe this move was made to help achieve, getting a new arena built for the Red Wings. 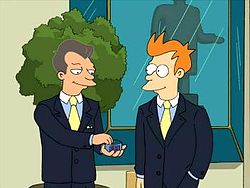 First we fire Kenny, then we sell off Datsyuk.

Despite the fact that it seems pretty clear that a guy who has largely been credited with building a new arena for a team might be brought in for that aim with a team that needs a new arena, Gordon is skeptical.

I have to admit here that I have no professional training in business and absolutely zero experience asking other businesses to help me build a $400M arena. I do however have some experience in something related to business and I can tell you that, if you're looking for a bit of nookie, it's better to start off with a kiss than to just whip it out and go straight for the money shot. The Wings started their relationship with Amway by adding their logo to the practice jerseys. Now they're copping a bit of a feel with the presenting sponsorship. I don't know if this is going to lead to the business equivalent of the sideways cha-cha when it comes to building a new arena for the Wings, but I can see the Red Wings asking Amway if they want to go get a "cup of coffee" in the future.

the Red Wings are losing a lot more than what they are receiving, if the current attitude of the fans stays the way it is. Lots of people are angry about this, and that means less money coming in. Adding onto that, it’s always harder to bring back a disgruntled customer than to attract new ones. By making this move, the Red Wings are losing a lot more money than they would be bringing in, which is a net negative in the short and long term.

This is my favorite if-then statement since "if my aunt had balls, she'd be my uncle." Boil it down and what he's saying is "If the knee-jerk reaction of a bored fanbase in September stays the same throughout the year, the Red Wings will lose money on this deal." Let's play with some conservative math here. All I know is that the deal is "likely in the high-six to low-seven figures." Let's go with Gordon's ballpark of $800,000. Ok, so the Wings pull in $800,000 (which they "don't need", of course), and this pisses off a lot of fans. How many fans? Well, according to last year's Fan-Cost Index (PDF), as put together by Teammarketing.com, the cost for four tickets (two adults, two children), four small soft drinks, two small beers, four hot dogs (more if Larry Murphy), two programs, parking for one car, and two adult-sized caps) averaged $299.92 in Detroit. To lose out on $800,000 the Red Wings will have to have angered 2,668 families to the point of boycott. 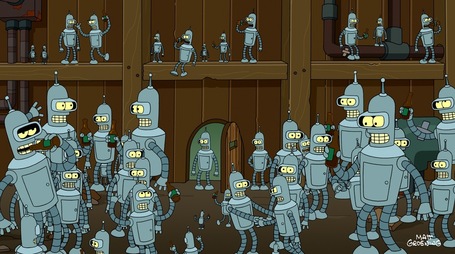 Or this many Benders, since they buy more beer (via poptimal.com)

I suppose that's possible; it may even be probable. I tend to disagree with the less-than-rosy outlook.

Bottom line is if you want to boycott the Red Wings because you hate the Amway business model and you think the professional relationship crosses a boundary of taste or integrity that you have, then I'm not going to try to stop you. But, obfuscating points, post-hoc fallacies, and huge leaps to conclusions aren't any more intellectually honest than the business development against which you're raging.