There's a phrase about winning ugly. I'm not sure what it is, but it certainly applies tonight.

You know what I do like? When Tomas Holmstrom scores. You know what I like more than that? When it's not on the power play, because that means the 4th line is contributing offensively. He absolutely ripped a slap shot past Richard "Thinner" Bachman to give the Wings an early lead, something that has been sorely lacking in their road play as of late. The Stars got that one back, on the power play if you can believe that. Alex Goligoski teed up the puck and blasted a shot that deflected in off Brenden Morrow's leg and through a screened Ty Conklin. The Stars took the lead on a very similar play. This time it was Sheldon Souray's shot that was initially stopped, but Loui Eriksson put home the rebound despite having a broken stick. The Wings looked unable and unwilling to break through the Stars' defensive shell, only managing 5 shots on goal. All in all, a pretty lousy period by Red Wing standards.

After failing to convert on a power play early in the second period, the Wings were gifted a goal when Jiri Hudler's pass deflected in off Goligoski's skate and past Bachman. It was a fluke but it counted, and the Wings drew even.

I wish I could explain what happened during the third, but I blacked out. When I came to, the game was in overtime.

So what happened in overtime, you ask? Nothing. Then it went to a shootout, which I normally loathe, but because I was half in a coma from watching the Wings saunter up the ice and shoot the puck into Bachman's pads every single shift, I was able to summon some energy. Pavel Datsyuk went first, and he would have scored if not for that pesky post. Eriksson went next for the Stars, and he also hit a post, meaning both team's best shooters were not able to score. If you were like me, you thought we were headed for the infinite shootout, but Hudler used some of the moves that he normally saves for 8's and scored the skills competition's only goal, and the Wings were able to escape with 2 points.

Well, what do we have here? Could this be the updated standings? Let's take a look: 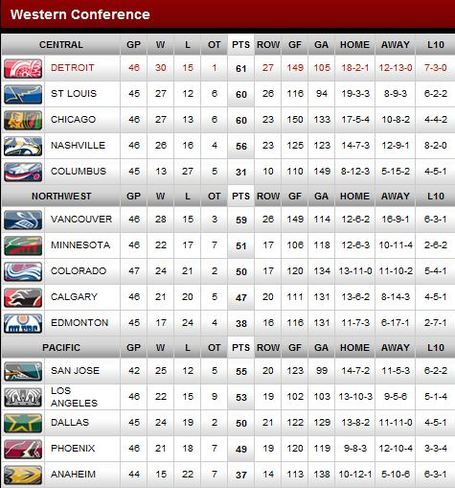 Could that be the Red Wings in first in the Western Conference? Why, what a wonderful sight that is. It's like the world suddenly makes sense again.

In all seriousness, it was great that the Wings took 2 points from a tired but very competitive Stars team. It shouldn't have been that tough, but kudos to the Stars for sticking to their system and getting a single point. Out of all the teams that could sneak into that last playoff spot, they are one of the least-hated for me.