Share All sharing options for: You Spin Me Right Round: Wings 3 - Coyotes 2 (Wings win Thumb War)

Raffi Torres shocked the hell out of all of us by actually doing something that was hockey-related that didn't end up with someone getting a concussion. His wraparound caught Jimmy Howard off-guard, no doubt worried that Torres was going to punch him in the head as he came around the net, and the Coyotes got the all-important first goal. Somehow the shots were 13-12 for the Coyotes after 1, although people leaving the arena after the game could only recall seeing 6 shots total.

The Wings came out in the second with some fire, and they began to take over the game. After a strong shift by the third line, the pressure continued, and Ian White's point shot found its way through a desert sea of bodies and past Mike Smith to tie the game at 1. The Wings continued to pour it on, and their persistence paid off when Todd Bertuzzi unleashed a rocket of a shot over Smith's shoulder, giving the Wings their first lead of the game. However, it was short-lived when Gilbert Brule pounced on a loose puck after a broken play in the neutral zone and slipped it under Howard.

After a slow third period where neither team scored, the two teams picked up their obligatory single point and headed to overtime. With that point, the Wings secured at least a 3-way tie atop the Western Conference and Central Division thanks to the Blues squeaking by a terrible Oilers team 1-0.

Unfortunately for us, we were subjected to the road Red Wings in overtime, not the home version, and they spent the first 4 minutes and 57 seconds pinned in their zone. The Wings killed off a terrible penalty call to Pavel Datsyuk, and almost won the game with no time left as Valtteri Filppula got a late chance. Smith stood tall and we went to a shootout.

In the shootout, none of the Coyote players even came close to scoring on Howard. Pavel Datsyuk was absolutely robbed by a gorgeous save by Smith, but he was unable to stop the spin-o-rama of Bertuzzi, and the Wings picked up 2 valuable points.

Howevert, this could have been a game of wasted opportunities for the Red Wings. They should have taken full advantage of a tired Coyotes team that was blown out the night before by a bad Ducks team. They should have scored on at least one of the three brain farts that the Coyotes had when making a line change. Hell, they should have just been able to manhandle a team that was inferior to them. They didn't, but they still got 2 points. Let's see what that does to the standings: 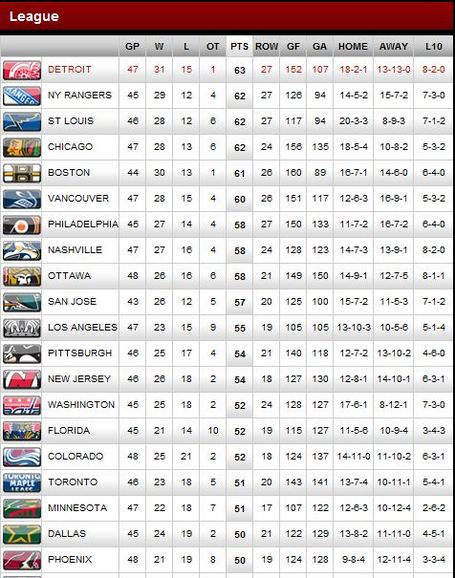 Why, doth my eyes deceive me? Could it be that the Wings are in first place in the NHL? It's true, but let's face facts: being in first in January doesn't mean anything. I mean, only an idiot would gloat about being in first place with over 30 games still remaining in the season.

The Wings get to head home for 2 games against Central Division opponents before heading out for 5 straight on the road. Those road games will be sandwiched around the All-Star break, but unlike the players we'll be working that weekend.