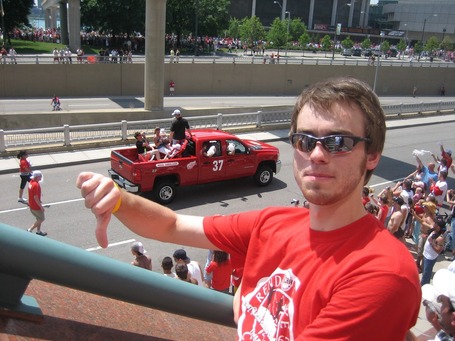 You know what sucks more than the Red Wings' recent play?

The worst athlete in the history of the Detroit, the NHL and the entire world returns to the city where no one loved him and no one was sad to see him leave. He brings with him a crappy Eastern Conference team that will get home ice and a top three seed because their conference sucks. The Florida Panthers have 90 points. They would be tied for 8th in the Western Conference. Plus, if they played a Western Conference schedule they'd be in the lottery. Seriously. How they hell does a team with a MINUS-23 goal differential win a division? Damn Washington, you must really suck.

Guess what though? The Panthers will probably somehow overcome Samuelsson shooting high and wide, whffing on shots, and getting his ass kicked to find a way to win this game. Do trap games still exist for the Red Wings after the last two losses? There's only four games left. They can't possible fall into another trap game. The Panthers are not good. Yet we all know how the Wings play against teams that are not good and from the East. I just don't know what to think about this Red Wings team right now. They'll probably just win 9-1 and then we'll think they've turned a corner until they lay an egg against the Devils later this week.

At least Babcock finally listened to us fans' kicking and screaming to get Nyquist on the freakin' top line. I hope Goose scores a hat trick and every goal is against Samuelsson's line (because he sucks). Bottom line though is that the Wings just need to show us something. I get that Florida sucks so it might not mean as much as it would winning against a good team. But just freakin' show us something. Show us you're not going to completely fold. Show us that you haven't tuned out your coach's message. Show us that you give a crap on the ice and bust your asses and work hard for a full 60 minutes. I'm sick of the same old tired statements we've heard the last three years. Stop spitting cliches at us and just get the job done on the ice.

Prediction: I have no idea.