Listen, this is funny. So is this. While we're at it, I present you with Macho Man Randy Travis, courtesy of Josh and thanks to a weird and quickly off-the-rails Twitter conversation with @jennyquarx today. 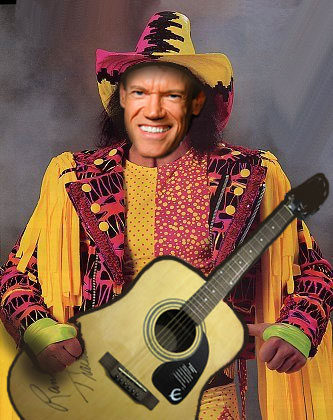 Florida Panthers (3) at New Jersey Devils (6) - 7:00 NHLN: The red-headed stepchild of playoff series continues to get the NHL Network slot, but game 3 was apparently quite exciting, with the Panthers erasing a 3-0 deficit to win it and take a 2-1 series lead. The good news is that with the staggered starting times of the games tonight, there's reason and availability to watch a series that could get really good in a hurry.

Boston Bruins (2) at Washington Capitals (7) - 7:30 NBCSN: Game 4 tonight between the Caps and the Bruins will be a huge pivot game for these squads. Offenses opened up for the first time in the last game, but the Bruins escaped with a narrow 4-3 win at the Verizon Center on Monday. It's hard to tell whether the taunting of Tim Thomas had an effect on his giving up 3 goals, but there were times he certainly looked rattled.

Phoenix Coyotes (3) at Chicago Blackhawks (6) - 8:00 CNBC: The Madhouse on Madison will be extra-mad that the Hawks will be playing tonight without Marian Hossa while all the 'Yotes lose in trade is Raffi Torres after Tuesday's brutal headshot. Of course, looking at the playoff scoring charts, maybe it's the other way around, since Torres' two points is infinity times more than Hossa's output through basically two whole games (*cough*). Look for the four-man boob-crew in stripes to "see" more infractions tonight, just like they did last night in Philly.

St. Louis Blues (2) at San Jose Sharks (7) - 10:30 NBCSN: You remember that Fugees song 'Killing Me Softly'? (of course you do, we're practically brothers, you and I). That's what this series has felt like so far. I'm later going to dip my balls in a freezing ice bath for ever admitting this, but I like the way the Blues are playing hockey in this series. Now if you'll excuse me, I have to go cleanse.

Time for some rooting.