Share All sharing options for: So Now What? Red Wing Playoff Scenarios

I didn't get a chance to see the game last night, so unfortunately I don't have a formal recap. You know what? I do. Here's what happened.

Whether it was due to fatigue or an emotional letdown from having played the night before against a division rival, the Wings weren't able to beat a Devils team that eclipsed the 100-point mark last night. I'll leave it to those who watched the game to say whether this was a solid effort that just wasn't enough or the same old crap we've seen these last few weeks.

On top of losing to the Devils, the Wings didn't get a ton of help from other teams around the league. Scoreboard-watchers were treated to close games in Nashville and Minnesota, but at the end of the night the Predators leap-frogged the Wings yet again with a 2-0 win over the Stars while the Blackhawks gained a single point after losing to the Wild in another shootout.

So where does that leave Detroit heading into the final day of the regular season? Where can we expect them to finish? I've thrown all the different scenarios into the Frinkiac-7 (don't touch it), and it's given us all the different scenarios facing the Wings and where they can end up after all is said and done tomorrow. Follow the jump for details.

At the end of play last night, here's what the standings looked like in the Western Conference: 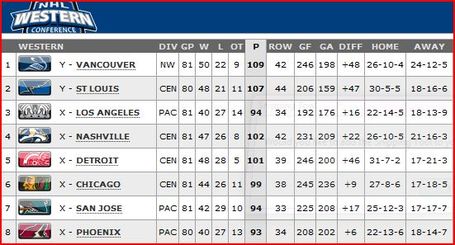 For Wing fans, that logjam at seeds 4-6 is what needs clarifying. The Wings currently sit 1 point behind Nashville without having the benefit of the tie-breaker. The Hawks are 2 points behind the Wings.

Tomorrow, the Wings will host the Blackhawks, while the Predators will travel to Denver to try and clinch home-ice advantage in front of all 400 of the Avalanche fans likely to be in attendance. I'm going to call a Preds win tomorrow night, because Colorado sucks. Chicago-Detroit? Who knows.

Presented below is every single scenario that can occur, and what the implications would be:

Confused? Me too, and I wrote it up. Basically, the Wings need to earn a single point tomorrow to guarantee that we will get sick of those goddamn whistles and the ugliest crowd gimmick since NASCAR fans discovered the wave. If they lose in regulation, then the Hawks will move ahead of the Wings by virtue of tying in the ROW column and earning more points in games between the two teams.

So what happens if they fall to 6th and have to play the Pacific champ like so many want? Could we see yet another first round matchup against the Coyotes or the third straight meeting with the Sharks? Yes and yes.

The Kings and Sharks will play the second half of their home-and-home tomorrow night, while the Coyotes will finish up on the road, first against the Blues tonight and then in Minnesota tomorrow. Thought the Central scenarios were confusing? Check this out:

There you have it. The Red Wings can still finish 4th, 5th or 6th, and their first round opponent could be Nashville, Phoenix, LA or San Jose. We'll know a lot more once the Wings-Hawks game is finished because that game will decide whether Detroit ends up in 5th or 6th, and from there it's scoreboard-watching time.