An Open Response to 'An Open Letter to Ryan Suter'

Share All sharing options for: An Open Response to 'An Open Letter to Ryan Suter'

One of the biggest questions of this upcoming free agency period will center around two players earmarked to make a very big splash as they look for new and expensive contracts. One of those players is still competing for the cup while the other is taking some time to talk to his family and weigh all of his options waiting for July 1st to come along. While nobody is certain what Ryan Suter will do this offseason, the majority of folks think he'll leave Nashville to seek his fame and fortune on somebody else's blue line.

The View from 111 asks that he considers all of the factors at play in his decision.

In his piece, the well-meaning author tries his best to offer Mr. Suter a different perspective on things, to help him decide on his future. For instance, what about the money considerations?

We could also look at the $7,500 that the state of Tennessee charges solely for the privilege of playing hockey in their state, but you'd be looking at that regardless of whether you signed in Detroit or Nashville. However, signing in Nashville means that what you won't be looking at is freedom from state taxes in places like St. Paul, Chicago, Columbus, and even Detroit (where you'd be playing more than 10% of your games in total). Michigan has reciprocal agreements with those three states, so you won't be paying taxes to them as a Red Wing.

Sure, the taxes on your income should overall be lower if you play 41 of your games in Tennessee compared to Michigan, but I'm not going to do a quarter of the math and pretend like we're finished. I trust that you've got people with a pretty great grasp on the cost differences there and that your agent is going to be hard at work getting you the best value.

More after the jump.

By the way, don't forget to look into the cost of living in any potential new destination. Just so you know, Tennessee has the second lowest composite cost of living index in the U.S. Now I know that if you are making $7 million a year, that may not be a consideration, but it is nice to live in a place where your dollars go further. No sense in wasting those hard earned dollars.

This is great advice, Mr. Suter. We certainly wouldn't want you throwing money down the drain. Did you know that the #1 state on that list is Oklahoma? Do you want to live there too? 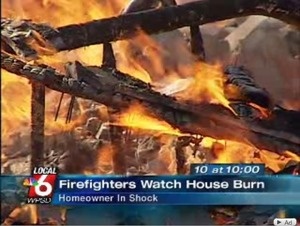 This actually happened in Tennessee. The total insurance settlement was $75 (via gawker.com)

Those are all important considerations, but for you, winning the Cup is what drives you. That is the goal of every hockey player, and I would be disappointed if you didn't have the drive, that desire, to capture a Cup.

You have said that you want to be in a place where you can win a Cup, and that will weigh heavily in your decision. It may be the primary factor in making your decision. Being a part of a team that can contend for a Cup is essential to you.

You hear that? "It may be the primary factor in making your decision." I'm going to stop your right here, Mr. Suter and let you know that if this is not the primary factor in making your decision, please enjoy the rest of your career as the more-expensive James Wisniewski. I wish you no ill-will for wanting to make bank over wanting to win the Cup; just know that's now what we're looking for in D-Town.

You have been here through the growing pains of this franchise. You have seen this team just be happy to make the playoffs, and you have been part of the team that finally broke through the first round and challenged in the second round. You were part of team that dominated our divisional nemesis in the first round and felt the sting of of a disappointing exit in the second round.

You put up with Nashville's loser mentality for so long and now that they're ready to pat themselves on the back and pretend to feel disappointed about the loss of an elation they've never known, you can't just leave for a city where the 2nd round has been a stepping stone for the past 20 years!

Or, you can come to Detroit where we don't feel disappointment for these early exits, we feel anger, we feel loss, we feel righteous indignation that the cup has been stolen from us and there's no excuse for it not to come back home to Detroit every damn year.

You can sit and hope that the Preds will keep their promise to spend to the cap while everybody learns little by little what it takes to win it all, or you can come to Detroit and learn it from guys who have postseason hardware. You can see the rings on their fingers and the trophies on their cases and you can get mad that they have those and you do not. You can play second fiddle in the Music City to some ape who doesn't read the game like you read it, but who gets all of your credit or you can come to the Motor City where you can either learn a few tricks from the best D-man to lace up the skates in your lifetime or you can immediately start competing for your own Norris Trophies.

All of us were distressed by the second round loss to the Coyotes, and it is apparent that the Predators still need some pieces. But you know what? There will be 29 teams in June that will say they need some pieces.

Yep. Just some of them won't be working off the assumption that their existing pieces fall in line behind Martin Erat and Mike Fisher.

How satisfying will it be to be part of a team that moved from expansion franchise to Cup winner? One that does it in a relatively short period of time. That is the opportunity and the potential that you have in Nashville.

Yeah, why don't you ask Brad Richards about that? You can catch him on a rest-day while his Original Six cup contenders are off.