Yesterday, we looked at Justin Abdelkader's RFA status and what it meant for the Wings going forward now that Darren Helm has been re-signed to his four-year, $8.5M contract. The idea was based on a detail penned by the Oakland Press' Chuck Pleiness in regards to the remaining Red Wings RFA salary demands. Today, we'll look at the other half of the RFA puzzle and go over the Wings' options when it comes to bringing Kyle Quincey back.

Quincey could be more difficult to sign at the number the Wings want since he made $3.25 million a year ago. They’re hoping to get him at a modest raise.

As a reminder on the salary situation, with Helm's signing, the Red Wings hold roughly $24M in salary cap space. They're going to be looking to add at least one high-priced forward and have room in their defensive corps for a top-pairing D-Man and a second-pairing guy. Brendan Smith will move into the lineup full time, but will likely fit a transitional third-pairing role. Quincey is an RFA who would be in the running for that 2nd-pairing spot.

Follow through the jump for a look at what Quincey brings to the lineup.

Kyle Quincey was a fourth round pick of the Red Wings in 2004 who found himself a waiver claim victim. Quincey was given a chance to play with a young LA Kings defense and had a breakout season in 2008-09 before being traded to Colorado the following year and leading their defense in ice time. This earned him the two-year, $6.25M contract which expired this year and left him a restricted free agent.

Quincey was re-acquired by the Red Wings this February in a trade which sent Detroit's first-round pick to the Tampa Bay Lightning (moments after the Lightning gave up Steve Downie for Quincey). Playing 18 regular season and all five playoff games, Quincey put up a total of 5 points while earning 12 penalties.

The book on Quincey is a bit varied. Where Abdelkader had a bit of the fan love bringing up his vote totals in the Pro/No series, Quincey's 64% Pro vote was likely influenced a bit by the frightening concept of turning over a full half of Detroit's blueliners in one offseason. There was also a relatively high number of unsure votes on him for very good reason.

The Red Wings and the fans are not quite sure what they have in Kyle Quincey. At 27, he's right at the age where he should be entering the prime of his career as a D-man. The problem is that it's very hard to judge how Colorado's top defenseman transitions to a 2nd-pairing guy on the Wings. Quincey did worse both points and penalty-wise on a per-game basis after the transition, but that's over a stretch where he had to re-adjust to a new team, adjust to a new locker room culture, and adjust to playing against competition that actually considered his team a worthy measuring stick.

Quincey also takes a lot of criticism for not playing well on a team that went 7-11-4 since his acquisition, scoring 2.5 goals-per-game while allowing 2.8. It's just about impossible to assign how much of that blame belongs to Quincey compared to his teammates, but I'd say he earned his fair share. He wasn't the cause of the problem, but he sure as hell wasn't playing like the solution either.

All of this uncertainty about what exactly the Wings have in a kid who we know can play big minutes against mid-level competition and help out on the power play makes it incredibly difficult to pin down an adequate salary range. When TPL wrote it up in his Pro/No post, they pegged him anywhere between $2.75-$4+ million.

The "modest raise" portion of Pleiness' article suggests somewhere in the $3.5M range. I can't begin to guess how many years on the term are involved in the discussion, but this very well may be the sticking point for Quincey.

So with the $3.5M range, let's look at those comparables (thanks to Capgeek)

(*Staal scored 5 points this season due in large part to his concussion issues. The 29 point output is from 2010-11)

We're a bit all over the place in terms of hits, ages, and point production and we're nowhere near a complete list, but this is a good mix of offensive guys and more defensive guys who share similar ages, cap hits, and minutes per game (although Girardi and Letang's minutes are significant outliers to the 20-21 minute group).

Looking at this group of players and making a comparison, it seems that putting up $3.3-$3.9M for roughly 2nd-pairing minutes and offensive production is right about in line with what's to be expected. However, there's one HUGE issue still working against Quincey which Wings fans saw on display. Of all D-men who played at least 70 games, not one of them put up a higher rate for penalties taken than Quincey. Even scarier is that it wasn't a particularly close race.

It's important to note that the penalties/60 column is only for every 60 minutes of ice time played at 5-on-5. Subban had a higher raw total of minor penalties taken (47 to Quincey's 37), but the rate doesn't lie. Quincey takes too many penalties and that lowers his value.

The questions become what did they set his value at when they traded for him, what will the increased cap do to his demands, and what are Detroit's options?

When Detroit traded a first-round pick for Quincey, they did so to get a guy whose salary was in the range of RFA compensation where a team would have had to give up a 1st and a 3rd round pick. While that's not entirely fitting to the point, it does help set what cap inflation can do here. In the Abdelkader post, I guessed at new compensation limits based on a $70.3M cap compared to the $64.3M cap. In order for Quincey to stay in the range where his compensation would still be a 1st and a 3rd, his salary would have to fall between $3.4-$5.1 million.

Looking at salary cap inflation another way, we can say that Quincey signed a deal worth a hit of $3.125M in a year where the salary cap was $59.4M. Extrapolating that percentage of the cap out to a $70.3M cap would raise Quincey's cap hit to $3.7M just to say he's worth the same now as he was two years ago.

Now, this is all a mental exercise to see what kind of dough his agent is realistically going to be able to expect on what would be an open market. The truth is that it's still entirely possible that the range is going to remain anywhere between $2.75 million up to $4+ million. It, however is a good idea to realize that Quincey taking a pay cut is not very likely. 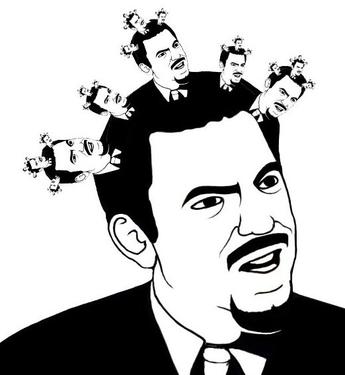 Here's a confusing picture to break up the wall of text (via irudiak.argazkiak.org)

So what does it all mean? Quincey has a good right to expect somewhere around $3.5M for his services and possibly more. Great. What if the Red Wings don't want to pay that?

Well, it leaves Detroit with the need to fill a gap on the 2nd pair, 1st/2nd PK unit, and 2nd PP unit with a puck-moving defenseman who can give roughly 21 minutes per night and can still be a physical presence. Let's see what's out there in UFA-land who fits that mold and isn't in his late 30s:

Dennis Wideman (Who made $4.5M last season)
Shaone Morrisonn (Name was invented using leftover Scrabble tiles)
Matt Carle (I feel dirty throwing him in this group, since he's the best of the bunch and will command a lot more than Quincey)
Jason Garrison (Late bloomer will be a gamble to see if he can consistently reach last year's output)
Bryan Allen (Not much of a point-producer, but brings the physical aspect)
Hal Gill (Hahahhahahahaaaaaahaha..no)
Carlo Colaiacovo (Injury prone, but perhaps a good bargain)

The thing is that this is not an awful crop. The team can take a chance on a more defensive-minded guy and use Brendan Smith in that transitional role to fill maybe a few more offensive zone starts and play more on the power play, while the big-minute PK that Detroit lost in Stuart can be replaced by a guy like an Allen or a Morrisonn.

The logical factor here is the same as it is for Abdelkader with an added twist: Will the guy's replacement plus the concept of added value for dumping him be worth the trouble it can cause? This is especially true with a guy the Wings gave up a first-rounder to get.

The biggest difference between Abby and Quincey here is that the risks of going searching for a replacement for this player are much higher. If Detroit lets Quincey twist in the wind while they search for a 2nd pairing D-man and miss, what are they left with? The safest bet is to give Quincey roughly what his going rate is going to be and then adjust later if something better comes along. Remember that teams may exceed the salary cap by up to 10% during the summer. It may be worth it to lock Quincey up early at a decent-yet-dumpable price as that ever-important insurance policy against what can turn into a crazy free-agent market.

In short, while Abdelkader is possibly expendable, Quincey is merely replaceable. The difference there being that it's important to make sure you actually lock up the player's replacement so you can make him expendable.

If Quincey gets to July 1st and signs an offer sheet with another team, Detroit has the same seven days to adjust, but this is a period where Quincey's offer sheet is a shining flag to other free agents about where Detroit stands. What's more is that the early market-setting deals are going to have a much wider affect on the price of free agents and Detroit could end up raising the price of their own asset accidentally by failing to sign him before things go nuts.

Kyle Quincey is an intriguing gamble as a replacement for Brad Stuart who deserves a longer look than the one he got in Detroit last season. He's not irreplaceable, but his value lies more in being available as an extra piece which can be sold to a panicking GM in the middle of the summer than as a potential short-term flip of a 1st-rounder this year for a 1st + a 3rd next year. I would look for a term in the 3-5 year range signed before 1 July or get ready to deal with Quincey filing for arbitration to let what is shaping up to be a lucrative market dictate his raise.