On Saturday, the Detroit Red Wings' Facebook page posted a poll question for fans of the team. 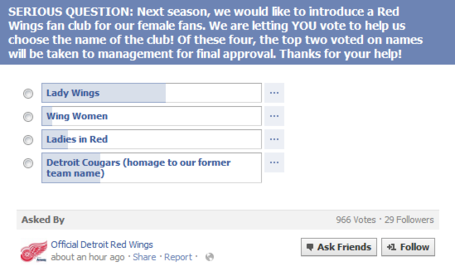 In case the title of this article bothers you, know that as of this writing, 'Detroit Cougars' was one of the two leading vote-getters in this poll. While it's a nice homage to the former name of the team, the implications are a bit disconcerting. The main question to ask now is "why do the Red Wings need a female-only fan club?" The answer is insanely complex.

I'll start by taking a stand as far as what Winging It In Motown feels about it: ultimately, if it brings interesting conversation our way and gives us an opportunity to have discussions like this, then it can't be all bad. However, we're going to stop way short of jumping into the realm of defining what makes one person a better fan than any other person, and that is unfortunately what may be at the heart of this matter.

If this club turns out to be the Red Wings' own version of 'While the Men Watch', then so be it. If there is a large group of fans who are more concerned with memorizing a players' favorite foods than memorizing his favorite moves when coming down the left wing against two defenders, then more power to 'em. As far as the Red Wings are concerned, all of our dollars are worth the same, so why wouldn't they want to maximize those dollars? Even as an elitist, it's not my job to tell people why they should be fans of hockey or how to do so.

The worry about this line of thinking is something that I have a lot of difficulty tapping into. The closest I can relate to the concerns of female hockey fans is having to put up with the occasional misguided idiot saying "you're from Kansas, what do you know about hockey?" Being talked down to like that has never bothered me because it's always some isolated dickweed with nothing further to say. I've never had to deal with the persistence of having my opinions or knowledge marginalized by this supposedly defining characteristic of my fandom.

So while it's easy for me to say that the inclusivity of such an exclusive fan club is perhaps a good thing because not only can I ignore the fans who don't share my exact interests, but also that it gives a better chance that more people will be inspired to develop my interests than the alternative, there's also the haunting realization that it also has the potential of making it more difficult for hockey fans who have to put up with annoying idiots.

The lady fans site can answer all their hockey questions and concerns and keep them off the male site. Since most of them dont know much about hockey besides what their husbands/boyfriends tell them

I'm not even going to try naming all of the commenters and Twitter people I know who happen to be female and who I think would absolutely crush this guy with their level of hockey knowledge.

While an all-female Red Wings fan club might foster interest in the sport for people who might otherwise feel left out by the assumption that a non-exclusive club doesn't cater to their specific interests, it brings with it the assumption that anybody who shares the defining criteria of such a club (being female), also shares those interests.

Naturally, the easy solution to this is to not participate if you don't share their interests and to laugh at anybody stupid enough to think you fit their stereotype of what a "female hockey fan" is. Once again though, that ventures dangerously into the territory of telling people how to be fans. It sadly doesn't lead to a solution where people aren't that stupid, but I don't think that can be helped.

Tell you what, WIIM is going to take a stand and tell people how to be fans. We welcome all here except idiots. If you want to be an idiot fan, there are lots of places you can do that. We're not here to tell you that you can't talk about how pretty you think Valtteri Filppula is (answer: very). We're here to warn you that dismissing a fan's opinion because she happens to be female is a very stupid thing to do.

In the meantime, we welcome any level of engagement from ALL hockey fans.