Last week we had some caption fun at the expense of Mikael Samuelsson. The winners with the most recs were actually a couple of inside jokes that weren't related to the picture. Those were funny, but I'm disqualifying them from winning because I'm the boss. I look forward to your emails to SB Nation higher ups to complain.

There was technically a tie, but the tiebreaker goes to the commenter (sorry, Graham). Your winner from last week is SlapshotGoal: 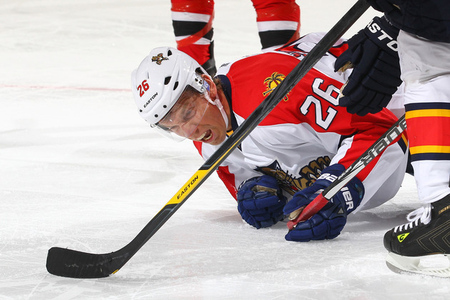 Aaaahhhh!!! He’s here… I can feel it… Everywhere I go I see the same guy wearing a Smith jersey giving me two thumbs down and taunting me. It’s like the 2008 Stanley Cup Parade all over again. Oh great Hockey gods make it stop!! Why does he hate me so much? Can’t we just be best friends?

This week, we've got another header image for you. Here's how it works: