Fan Survey Results: Which Markets Should the NHL Abandon (Or Should They)?

Share All sharing options for: Fan Survey Results: Which Markets Should the NHL Abandon (Or Should They)?

Yesterday, we put up a survey asking fans to provide the specific names of the teams they'd either fold or relocate for the good of the league. After counting 1,200 responses, we've got your answers.

First, a note on the nature of the poll. We asked specifically the "fold OR relocate" question because I wanted this to be more about the specific markets than a breakdown of how many clubs there should really be. Second, The "Other" option was used entirely as a red herring. Knowing that this is the internet and there are few things the internet loves more than skewing numbers on polls for the lulz, that option was placed to give them the path of least-resistance to having their answers ignored.

While there's still a bit of creative answering and I do somewhat regret not statistically counting the person who bravely answered "None" to the question via write-in, I'm generally happy with the results. Follow me through the jump for a review of the results and of what they mean.

The Coyotes are the obvious choice, much to the chagrin of the die-hard fanbase that is struggling to grow in the desert. Despite a visit to the conference finals, the Coyotes struggle with attendance, have struggled to solve the ownership gap left by Jerry Moyes' awful tenure, and have claimed staggering losses through their ownership by the NHL. The damage to the franchise's ability to operate in Glendale may be irreparable at this point.

Florida made a return to the playoffs for the first time in more than a decade this season by winning the Southeast. They lost to the eventual conference champion Devils in seven games. The Sunrise cats haven't been better than 19th in home attendance since before the last lockout and are consistently priced below league average for tickets. Despite this, Some of the team's finances seem to indicate an odd stability for a franchise that looks like it should be as bad off as Phoenix. I'll have more with Litter Box Cats' Donny Rivette soon to get a bit more in-depth into that situation.

The Jackets just can't catch a break. Their one trip to the playoffs found them crushed by a juggernaut and a combination of bad luck and horrible management have combined to destroy fan confidence in the franchise. Despite a high number of votes, I feel that they're a decent team away from having a strong foothold in the area. If you dispersed their collection of players and moved the Coyotes franchise into town, you might just rejuvenate the area.

Carolina Hurricanes (168 votes - 14% of responses) - Honestly a little shocked to see Carolina ranked this high.
Nashville Predators (154 votes - 12.83% of responses) - Nashville is a victim of telling their own press how poor they are. Along with Carolina, they may be a model franchise for non-traditional market growth.
Anaheim Ducks ( 148 votes - 12.33% of responses) - The LA area is ten-million strong, but getting SoCal interested in two hockey teams may not be possible.
Tampa Bay Lightning (145 votes - 12% of responses) - New ownership, new commitment to the team, some smart guy as their GM. No.
Dallas Stars (131 votes - 10.9% of responses) - Dallas fell on hard times through an ownership change, but now at least are working towards having a team identity again. I don't see them moving away from a huge population center.
New Jersey Devils (106 votes - 8.8% of responses) - $80M in debt is no small feat, but neither is what this franchise has accomplished in New Jersey.

As you can see, the trend of people voting for multiple markets dropped as expected, with most responses just calling for one or two sacrifices and the number dropping off significantly after four. Only four total people voted for all 10 teams in the poll.

I didn't run through all the permutations, but I'm confident the most-common vote included both Phoenix and Florida. 631 responses included both of those teams and 103 included only those teams. That's still less than the 126 people who voted for only Phoenix.

These are kind of the votes I was looking for immediately. Really, the entire purpose of the poll was to see how many people who talked about the "simple" solution of eliminating southern teams would go so far as to empty the Southeast or the entire South.

I have to admit that I was pleasantly surprised to see so few people taking such extreme steps, all things considered. For those wondering why the NHL insists on having teams in those markets which are apparently an affront to the northern spirit of the game, I offer you a simple reason why: 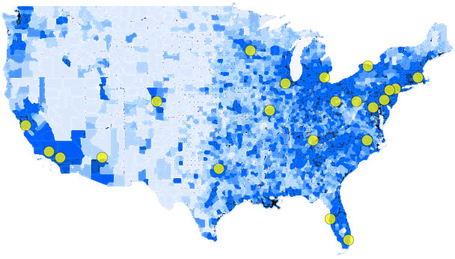 Image created by and used with permission from Josh Howard

The yellow dots are US hockey cities. The blue stuff is rough population density. The darker the spot, the more people. Now let's let the Southeastern hockey-haters (and the Phoenix realists) have their way: 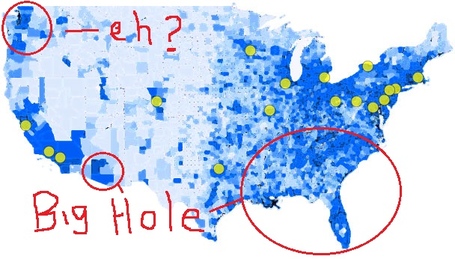 This is the map that any television provider is going to be looking at in the future if the NHL ever wants to complement the NBC deal they just got or when it comes time to renew or renegotiate that deal in the future.By 2010 census numbers and some rough regional figuring, the difference in population exposure between those two maps is roughly 20% of the US Population (or more than 62 million people).

Matthew Yglesias at Sate made this point pretty well in May:

But to maintain that national deal, the NHL has to present itself as offering a true nationwide sports league which means you need teams in the sunbelt.

Obviously, there are limits to how much the league can take when it comes time to keeping teams in untenable markets for the sole purpose of trying to grab a television deal, especially since the league has not yet transitioned from a mostly gate-driven league. They might have to lose Phoenix and they could possibly get away with the loss of Anaheim, one of the New York-based teams and potentially Columbus or one of the Florida teams. Thanks to some regional overlap, it might not be so harmful (which, especially when taking the nature of southern sports fans into consideration is probably the biggest reason they could lose Atlanta and their 5 million+ residents).

The thing is that there's only so far you can stretch a region and the southern tendency to still root for a regional friend over a northern foe doesn't hold up nearly as strongly south of the Florida Panhandle.

However, even with regional overlaps, part of the southern expansion plan was created to build a hockey culture in a portion of the country where there previously was none. Abandoning markets like Raleigh, Tampa Bay, Dallas, Nashville, and Anaheim (or even Sunrise and Phoenix) is still a loss of a foothold.

The larger clubs are not going to want to subsidize these footholds while they wait for a potentially viral growth spurt to make them self-sustaining, especially while those subsidies are helping those teams directly compete with them. But if the league wants to move past the old gate-driven model and into a national broadcast model, the best bet is to continue to strive for growth in non-traditional markets. At this point, I believe Phoenix is a lost cause and would like to see them relocated (potentially to Seattle, if they can get an arena built), but I think that relocating or folding hockey teams elsewhere (especially Florida) would be a mistake.

I would also call for a CBA which creates more of a partnership between club owners and more choice. The current revenue-sharing system with its various means of disqualifying recipients from the dollars they need and the salary floor system which doesn't properly adjust for a widening of revenues between top and bottom earners is in drastic need of an overhaul. There are going to be some tough decisions for the league coming out of this lockout. Hopefully, they'll make the right ones.