Head to Clark Park this weekend to support youth hockey

Clark Park is a city-owned facility in southwest Detroit which operates year-round to host festivals, concerts and special events, serves as a popular meeting place for family picnics and gatherings, and provides free lunches to more than 100 children daily throughout the summer. It also features the only regulation-sized outdoor ice hockey rink within the City's confines.

Once upon a time, the Detroit Recreation Department funded and staffed the Park, but the City of Detroit's financial crisis led to its closure in 1991. Concerned citizens subsequently formed a nonprofit organization – the Clark Park Coalition (CPC) – to partner with the City's Recreation Department and, as a result, Clark Park remains open and able to serve as one of the community's anchors, providing year-round programming for those who use it. The collaboration has been insufficient to keep the many of the Park's amenities, including the outdoor hockey rink, operating at peak condition. While hundreds of volunteers donate their time and energy each year to help with the park's upkeep, the park's greatest need remains additional funding.

Unfortunately, the need for funding has been compounded by the tough times the City has faced and continues to face, the thrusting of additional staggering expenses for Clark Park utilities on the Coalition, and the anticipation that, when the city begins making additional cuts, city contributions to recreational programs will be one of the first made. 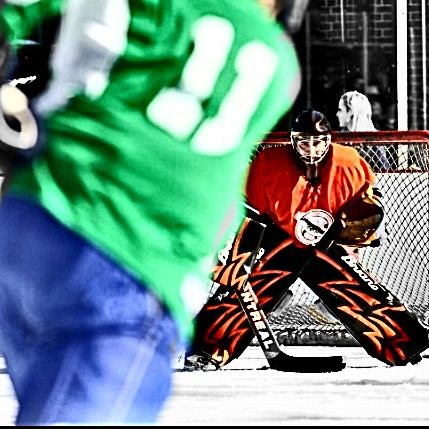 The History of the Frozen Fish Fiasco

In 2010, the members of two Labatt's Hockey Detroit 'A' league teams - the Cedar Point Carp and the Faurecia Whalers - got together to generate and execute a plan to raise money for the CPC to help keep this historic park open and running. They created the Frozen Fish Fiasco, a set of outdoor hockey games at the Clark Park outdoor ice rink.

The early games pitted amateur teams from different youth hockey organizations in the surrounding Metropolitan Detroit area against one another while culminating with a game between the Carp and the Whalers. It was a success, with hockey players, young and (very) old, getting the unique experience of playing an outdoor game and the CPC receiving some of the additional funding it so desperately requires. The event's success led to a second and third Fiasco, which were similarly successful in sharing this unique event with more excited young hockey players and raising more funds for the Coalition. 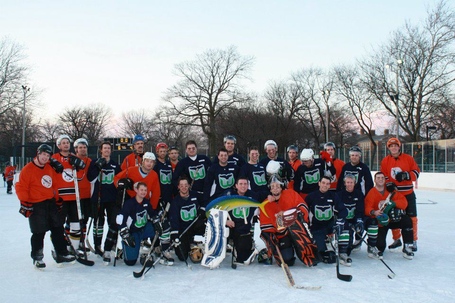 When Even and Riggio began planning the Fourth Annual Fiasco in October, they intended to do something similar to last year's Fiasco. But they learned that the Detroit Hockey Association, which used to operate down at Jack Adams Arena in Detroit and had teams of all age levels comprised of kids from Detroit, had folded. This meant that the CPC ran the only organized hockey program through which kids from the City could play in the City. Compounding matters was the fact that, when the economy tanked, the City made the CPC responsible for a bigger share of the Park's operating costs. While the CPC had numerous volunteers who were willing to donate their time and energy to help with the upkeep, many did not have any money to contribute, which meant that the CPC's greatest need was and continued to be additional funding.

Even and Riggio told their teams, and the teams agreed that they were in a position to do something more. The players may have grown up in different parts of the Detroit area, but they had all grown up playing hockey in those areas. To a man, each had enjoyed countless good times with great friends made through hockey over the years. According to Even, the general sentiment was, "We were fortunate enough to meet so many great people and have so many wonderful experiences through or because we played hockey. Why should kids in the surrounding areas [to Detroit] have the opportunity to make similar friendships and have similar experiences while kids in Detroit are denied the possibility of making similar friendships and having similar experiences due solely to cost and the lack of opportunity?"

They knew they could help the CPC, and set a goal of raising $10,000 through this year's Fiasco, but raising that much money required them to make the Fiasco a much bigger, better and more organized event. The owner of the House of Shamrocks in Hazel Park, Mike Wilds, was instrumental in helping them do so, working with them to add the House of Shamrocks as the Fiasco's second venue, organizing pizza parties for the teams, and loaning them his establishment's bus to provide rides to the participating teams to and from their games. Riggio notes, "Only after Mike suggested we bring everyone back to the Sham, where the kids could have a pizza party and the hockey parents could warm up while enjoying one another's company indoors, and offered us the use of his bus did I realize how much bigger we could make the Fiasco."

Still unsure as to whether the modifed Fiasco would be a draw to amateur teams in the Detroit area, Even and Riggio reached out to teams they thought might enjoy the experience as much as they had. Within one week, they had received interest from 37 of them. They could not accommodate all of the teams, given the limited amount of daylight available in late January, but they were able to lock in eight teams in addition to the Whalers and Carp. While each of the ten participating teams agreed to pay a significant sum to play a single hockey game, albeit in a unique environment and for a great cause, they did not feel as if team entry fees alone were going to generate enough revenue to provide enough help to the CPC.

They added a silent auction to raise additional funds and a collection of new and gently-used hockey equipment for the use of players who will participate in the CPC hockey program in the future. The auction also required them to reach out to local and hockey-related businesses for potential sponsorships and donations, but with only two of them doing the contacting, the early returns were slow.

They brought aboard former youth hockey player and Detroit resident, Mike Baitinger, and the former Director of Scheduling for ex-Michigan Governor Jennifer Granholm, Jeff Dutka, to help get the word out and secure participation from those in a position to help. According to Even, their additions were, "incredible and critical to the success of the event. These guys brought awareness to the Fiasco in ways I hadn't imagined, using their media contacts and social networking skills to get the word out far further, and to a far more target audience, than what we'd been doing."

Within a few days of their additions, the response Dutka and Baitinger helped generate from sponsors and donors was almost overwhelming. In just a few weeks, several generous businesses in the Detroit area, including Down With Detroit Apparel, Cheli's Chili, Bearclaw Coffee and Red Run Golf Club, and entities connected to hockey in and around Michigan, including Perani's Hockey World, the Detroit Red Wings, the Plymouth Whalers, the Toledo Walleye and the MSU hockey team, jumped on board and made donations of various types. 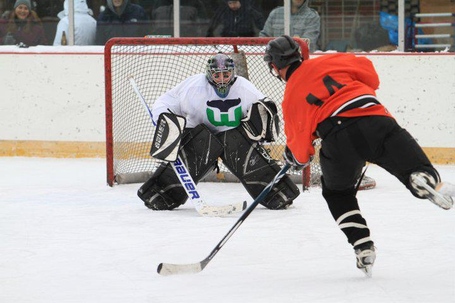 Now, after months of hard work and preparations, the Fourth Annual Fiasco will take place this Saturday, on January 26, 2013, at Clark Park, and will feature the following games:

Donations and equipment will be accepted on Saturday from 9:00 a.m. to 5:00 p.m. at Clark Park, and the silent auction will run concurrently at both Clark Park (9:00 a.m. to 5:00 p.m.) and the House of Shamrocks (9:00 a.m. to 7:30 p.m.). The games will be followed by an afterparty at the House of Shamrocks. Even concludes, "I can't wait. So many people have been so incredibly generous that this event can't help but be a success. The only things with which I'm concerned at this point are how to stay warm and how we can beat the Carp again." Riggio counters, "We agree that this is going to be really successful, but the Carp is going to win the trophy back this year." Fans bold enough to brave the cold will find out which one of them is correct on Saturday afternoon.