Continuing our look at the Red Wings' lineup

Life after Nicklas Lidstrom is here. It's here and it's terrifying. The Red Wings lost two of their top three defenseman from last season (Lidstrom and Brad Stuart). Add in the fact that they lost Brian Rafalski two seasons ago and the the blueline in Detroit is in full rebuild mode.

Niklas Kronwall, 31, is the old man of the Wings defensive group. He's the defacto leader now that Lidstrom is gone and it's a position he's been groomed to handle. Over the last few seasons, Kronwall has stepped up as a voice on the team and it's the organizations showed their faith in him by naming him an alternate captain last year. The defense very well could sink or swim this season based on Kronwall's play.

Strengths: He can and will play in any situation. Kronwall can eat up minutes on the ice whether it's on the power play, penalty kill or even strength. He's also going to put up some points. It's been three seasons since he hit 50 points, but he's basically a lock to give you 35-40 points. He's also can be game changer with his big hitting ability. Nik can flip the momentum of a game with one Kronwalling-style it.

Weaknesses: He's not perfect. Kronwall will make some mistakes and will be on the ice for about as many goals against as goals for. He was a minus for the first time in his career last season and was only plus-5, plus-5, and plus-2 in the previous three seasons. Of course, plus/minus isn't the be all-end all of stats, but it's interesting to see how close to even he is of the last few years. Oh, also, he could leave his feet on one of those Kronwalling-style hits and cost his team. The Wings need him more than ever and he can't be spending too much time in the box.

Expectations: If Kronwall can net 5 goals (he's had career highs of 11 and 15 the last two seasons) and put up around 25-30 points, that would be huge in the shortened season. In addition to the offensive numbers, he really just needs to be the rock on the blueline. The Wings need to be able to count on him at all times and he needs to deliver. There needs to be a go-to-guy on the back end and it's his time to step up. 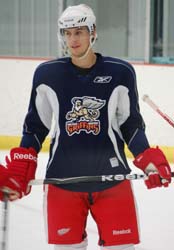 It's the kid's time to shine. I don't know about everyone else, but I've been waiting for Smith to get his shot for awhile now. There are some extremely big expectations on Smith's shoulders and I think he welcomes the challenge. The 23-year-old is the youngest defenseman on the team and the youngest overall on the roster with Gustav Nyquist. Plus, he's a good, old Ontario born kid, so he must be pretty good.

Strengths: He's fearless. Smith wants the to take the ball and run with it. He's going to want to play in all situations. He's going to take chances. He's going to challenge himself and challenge for other's spots on the team. Smith is a natural puck moving defenseman and has the offensive ability to put up 40-50 points one day. He put up 20 points (5G, 15A) in 32 games with the Grand Rapids Griffins this season. He also isn't afraid to drop the gloves. Detroit needs some more players like that.

Weaknesses: The willingness to take chances can come back to haunt Smith. There are times where he is going to jump up into the play and will get caught. I wouldn't call Smith cocky, but he knows he has the ability and skill to play hockey at a high level. Expect him to try to make fancy plays that were easy to pull off in the AHL, but could be trouble in the NHL. He's a rookie. He's going to make rookie mistakes.

Expectations: The crazy expectation would be the Calder. The more realistic expectation is top 4 minutes and playing in all situation. If Smith doesn't end up on the 2nd pair D by the end of the season, it will be a bit of a disappointment. No one is expecting him to be the second coming of Lidstrom, but he's going to get his cup of coffee in the top 4 and on the top pair. He has to make sure he stays there. He had 7 points in 14 games last season in the NHL. If he can put up 15-20 points and play in every faze of the game, maybe he can be in the Calder discussion.

Jonathan Ericsson is the third oldest defenseman on this roster. Think about that for a moment. The 28-year-old is in year 2 of a 3-year deal with a $3.25 cap hit. He's expected to earn every penny of that this year.

Strengths: One of his strengths is, well, strength. He has size and is the biggest guy on the roster. Big Rig showed last season he is an asset on the penalty kill and really helped stabilize the Red Wings special teams play when down a man.

Weaknesses: He doesn't use his strength as often as he should. The Wings don't need him to drop the gloves and throw people around, but he needs to be more physical and in the corners and in front of the net. You're a big, freakin' man. Claim your territory and don't let anyone else into your damn home. Also, he's Jonathan Ericsson. We give him crap all the time and he's better than we make him out to be, but every now and then he's going to make that mistake that makes us scream at the TV and causes Petrella to tweet his dislike for Riggy Shitbox.

Expectations: Real solid play on the penalty kill and even more improvement at even strength. He needs to play 20+ minutes a game and he needs to play well. I don't care how many points he puts up. It doesn't matter. He just needs to be an anchor and take over the Brad Stuart roll on this team.

Man, there was no one that I forgot about more when trying to come up with D pairings than Ian White. The 28-year-old is in the final year of his deal and it will most likely be his final season with the team unless he all the sudden turns into a Norris type defenseman (don't hold your breath).

Strengths: He has a solid offensive game and put up 32 points last season. White won't dazzle your or anything, but he can contribute. Hopefully, he can do it without playing with Lidstrom. As one of the veterans, he's going to be relied on to chew up minutes and he has the ability to do so.

Weaknesses: He's not very big and can get pushed around. He struggled as the season went on last year, especially when he wasn't paired with Lidstrom. And he sure as hell won't be paired with #5 this season.

Ken Holland's big acquisition at last year's trade deadline. Kyle Quincey returned to Detroit in exchange for a 1st round draft pick. He scored a goal in his first game back with the Red Wings, but then it all seemed to be downhill from there. The Wings knew Brad Stuart was leaving in the offeseaon and Quincey was the man brought in to replace him.

Weaknesses: Quincey puts up points, but is on the ice for a lot of goals. He's only been a plus player once in his career. He will also take penalties (and some dumb ones). Last year he had 29 PIM in only 18 games with Detroit. That was good for 10th on the team and 3rd among the Wings D.

Expectations: He's going to lead the Wings D in points this season. Quincey has to make his mark on the power play. Plus, much like a lot of guys on backend of this roster, he has to eat up minutes. No single player will take up the minutes left behind by Lidstrom. Each player will have to pick up the slack.

The newest addition to the Red Wings blueline. Carlo Colaiacovo is entering the first season of a 2-year deal and it's already gotten off to a great start. He recently hurt his shoulder playing in Europe and is out the next 2-3 weeks. He's going to miss the beginning of the season, but hopefully it won't take too long for him to get back.

Strengths: Similar to White and Quincey, he's another one of those guys that can put up 20-30 points in a full season. When he's on the ice, he could be used on the power play.

Weaknesses: He's injury prone. He could help the Wings if he's on the ice, the problem is getting him on the ice.

Expectations: Not really sure. If can get 100% healthy, he could be an asset to the Wings. If Smith isn't paired with Krownall, I could see the two as a pair. If he gets back on the ice in a reasonable time. He could add 15-18 points to the team.

The second youngest member of the Red Wings defensive core. Jakub Kindl is 25-years-old and it may be a make or break season for him. The Czech native has had trouble getting into the lineup and it may be more of the same this year.

Strengths: He skates well and can handle the puck. After that, Kindl is just pretty much average at best at the NHL level.

Weaknesses: Kindl isn't very physical and his offensive game is really anything to rant and rave about. He's probably can't log anywhere near 18-20 minutes and you don't really want him out there on the penalty kill.

Expectations: Kindl will end up spending most his time in the Leino Lounge. He'll get a chance with Colaiacovo hurt, but he isn't going to play ahead of Kronwall, Ericsson, Smith, Quincey or White. Kindl will have to really shine the first few games to stick when Carlo returns.